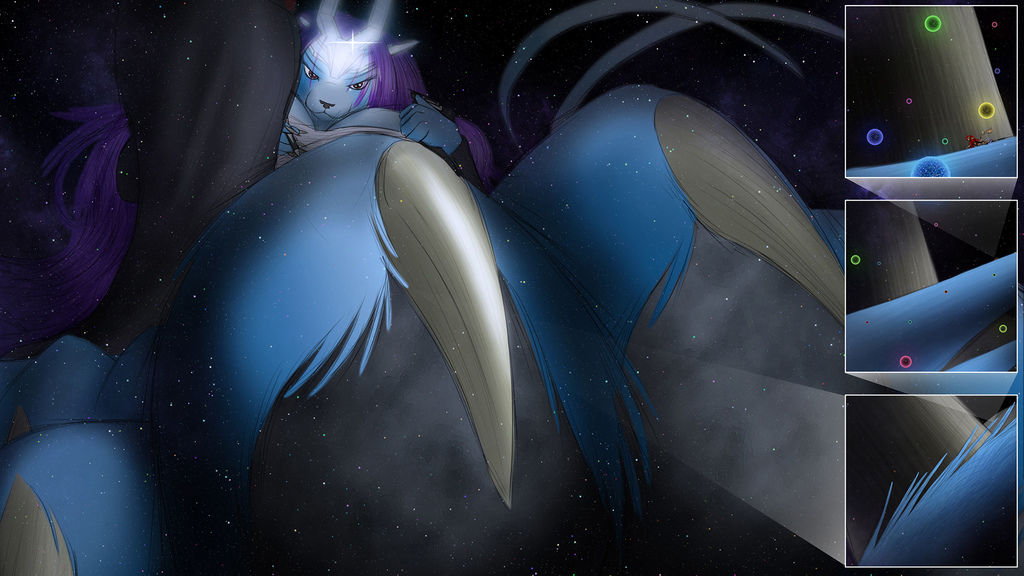 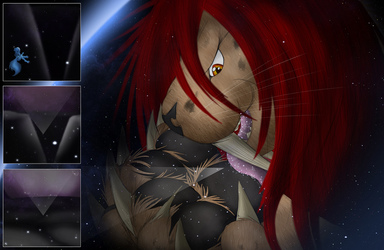 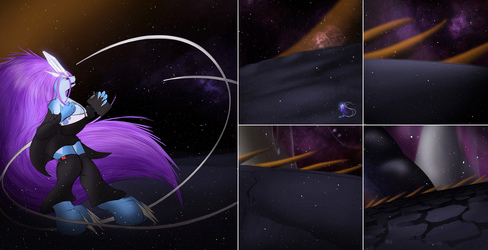 Fang growled, shoving off the last bits of the tiny annoying bubble. It got stuck on her paw, the tight surface wrapped around her limb and smooshing the dozen or so remaining un-eaten scraps inside flush with her paw. Before she could go about chewing up and swallowing the rest, though, she noticed her new surroundings- food. Big food! Huge floating bubbles of tasty snacks, all over the place, some smaller than her fur strands, others bigger than her stomach! For now, anyway. They'd all shrink to nothingness as well soon, when she ate them too. She settled down on the blue ground beneath to-

Fang was struck by a very sudden, very strong, very overwhelming sense of unease. In particular, she felt like the far-distant, gleaming, reflective spire was something dangerous she should probably watch out for. She wasn't sure how she knew, but she was absolutely certain that she knew it.

Well. This is certainly surprising. And not in a pleasant way.

Charity narrowed her gaze as she lifted her leg, eyes locked dead on a specific point on her massive toes. The faint glow of her crystalline crown brightened as she studied a particular multiverse- or, rather, what was once a multiverse and was now a paw warmer- and its contents. What she saw made her frown and scribble a quick note on her clipboard.

This is getting more than slightly tiresome. Some of us have a job to do, and like doing it well. Having smilodons devour so much so quickly that they ascend to goddesshood on a frequent basis is incredibly disruptive. I am… Going to need to have words with certain powers over this matter. And soon.

Charity's thin tails whipped around angrily behind her, shoving and brushing multiverses into order and shaping them on a grand scale. Her hair floated in beautiful patterns, twisting and bending in precise motions that carefully and dexterously avoided displacing the space it flowed through. But she never took her eyes off that paw fur strand, keeping her gaze heavy and focused on its unknowing passenger.

Actually, I think this problem has grown large enough to require more drastic countermeasures. I have a large number of possible ideas in mind for fixes, but I think it'd be better to consult my top advisor. She's never failed me yet, and will undoubtedly have a solution to this problem which will leave all parties satisfied- even if one of those parties is your seemingly bottomless stomach. It's simply a matter of finding her…

After the extreme chaos caused by Vinca and Fang, who better to get things back into order than Charity? We're nearing the end now, and as such, the size differences are starting to get VERY big. While Fang was big enough to fill an entire multiverse in the last page, she's completely lost on that strand of Charity's fur!

Oh and for anyone confused as to just where we're at, we're now in the omniverse. That is, all permutations of our universe at every given point of time, past, present and future. Or to clarify an omniverse is all permutations of everything that has, does, and ever will exist from one Universe.

Fang belongs to myself.
Charity belongs to
Commissioned by