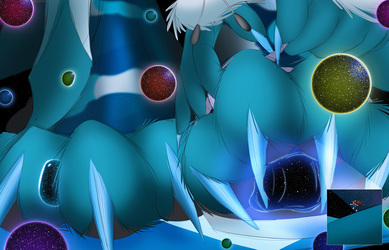 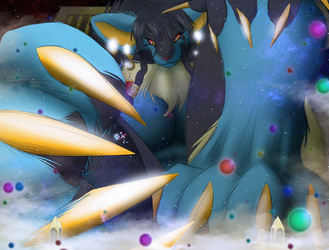 "Yeah, haha! This is the life! The cosmos in my fur, my paws on the board, and my board on an endless, growing, near-flat surface as I hurtle at rising speeds towards my best friends' big fluffy toes!"

Niamh weaved back and forth as she accelerated down the vast, smooth claws beneath her board and paws, her reflection blurred and torn by the sheer swiftness. Universes lodged themselves in her fur by the hundreds, shrinking away as she instantly outgrew them just like snowflakes melting away on her jacket as they encountered the Glaceon's cold-defying body heat.

She'd gone faster than this before, certainly. Well, relatively faster, at least- she was currently so huge that the mere act of blinking was a multiple-universe-spanning endeavor. But when nonsensically huge size was accounted for, Niamh had still managed to outspeed her current rate- but only when in total freefall through the air. Now she was doing it on her board, with the only friction coming from its contact with Lumi's massively vast claw. She had to be doing at least a few hundred miles and hour, easy. She couldn't wait for when she REALLY tried pushing herself!

Glancing down at her toes again, Lumi couldn't help but chuckle despite herself. She… She really should have been terrified. Her powers were out of control. Not just out of control, even- they were fully haywire. The frozen vacuum of space had rapidly pushed her cold-based growing to its limit, surging her beyond the edges of her entire home universe, but the moment she'd burst free she'd found that whatever was beyond the barrier at the end of the universe made the void of space seem like a raging bonfire. Her body was growing itself and anything touching it at a terrifying rate, to the point that Lumi was literally incapable of altering it- trying to slow or accelerate things by a mere mile or two per second would have been an excruciating and exhausting ordeal, but her current expansion would have been awkward to measure in universes per second. Between her growth in size and the growth of her frost aura, she really couldn't see much besides herself, and flickers of flash-frozen universes that disappeared into her fur instantly.

And yet… "I… I have faith in you, Karin. I trust you. I just hope I find you soon, heh!" She smiled and wiggled her toes, wondering what the strange fluffy Arcanine goddess had been up to. Lumimyrsky was never one to harass others without good reason, but Karin had begged- literally begged, like a happy puppy- Lumi to always come and see her if she ever needed help from a goddess. And, well, as much as Lumi liked to try solving problems without bothering others, 'the entire planet getting smooshed and lopsided after a bizarre chain of incidents involving increasingly giant paws' was just one of those problems that was too big to handle on her own. Even at this size! Thankfully for the Sneasel, though, she didn't have to worry about whether or not Karin could help fix things. After all, Lumi remembered how big she'd had to grow last time she needed to ask for Karin's help- the Arcanine was a very, very, very powerful deity. She'd set things right and put them back to normal in no time at all- Lumi's size and power included- and then probably hug and cuddle with her for several minutes while asking if she wanted some tasty warm eggs or a drink of hot cocoa or maybe a fluffy nuzzle.

Of course, even knowing that Karin would find her right away when she got big enough normally wasn't enough to keep Lumi calm in this sort of situation. There was still so much nonsense in the very idea of outgrowing space over and over until a certain goddess happened to notice. And, really, space was cold and empty and scary. But her friend Niamh was never scared. Niamh was always pushing herself and Lumi to try new things, to go to new places, to explore new lands. And this time, she'd asked to come along and try to offer some support. Lumi had been expecting that they'd stick close together, maybe talk about how to explain things to Karin, but they both realized quite quickly that there would be a temptation far too great for Niamh to ignore.

Thus it was that Lumi spent her time growing to meet Karin by wiggling her toes, sending massive waves of motion along her towering Sneasel claws, and giving her tremendously enthusiastic friend the wild ride of her life.

"There are worse ways to spend a Saturday night, I guess, heh!"

Part 18 and now we know how Niamh got so big!

She's keeping Lumi company while growing excessively bigto ask a a goddess arcanine for some help on repairing the planet! Fortunately for Niamh, Lumi's claws make for an awesome snowboarding slope at any scale!

Niamh and Lumimyrsky belong to myself