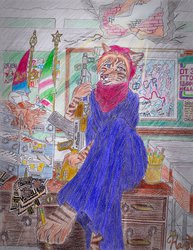 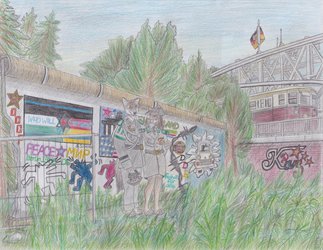 "The Wall will be standing in 50 and even in 100 years, if the reasons for it are not removed." -General Secretary of the DDR Erich Honecker, January 1989

(About the picture)
Here stands a [photogenic] duo, Regina Fabiénne Esselberg and Dawhid Walther Viktoria patrolling in front of the Berlin Wall, near the Brandenburg Gate, as their Stasi duties imply.

The two are a married couple and dynamic duo, as they are [mostly] seen together.

Dawhid Walther Viktoria (Englicized to David Walter Victoria) was born in Koszalin, Pomerania, Germany and has been an avid world-traveler throughout his life. Throughout his long, 500-plus-year life, he has (negatively) impacted world history, claiming selfish dominance, with evidence showing today. Stemming from Hasidic Jewish roots, he strictly pertains to his customs and heritage, even secretly under hard [religious] oppression. Moving to and living in Canada and America [before] the Cold War, he frequently visits his German fatherland, with his wife Regina, to visit [remaining] family members, as they are very close to one another. When the Nazis came to power in 1933, he was trapped with his wife and family under the harsh anti-Semetic regime, and as witnessed the passing of friends, family, and neighbors under the Gestapo. Seeking revenge, he sided with the Soviets, declaring himself a Communist, vowing to put the stranglehold on Hitler's empire. He has even encountered Mishya on several occassions, and suffer a fierce rivalry (mainly due to personality differences). At the end of the war, in a divided Germany, he stayed loyal to his home-province [located in East Germany] and enlisted in the Ministerium für Staatssicherheit (Stasi). He claims high authority and holds a harsh grudge over those who challenge his power, seeking new methods of acquiring it. Hoping to vanquish his enemies throughout the fall of the Berlin Wall, he sought to create a new global empire...

Regina Fabiénne Esselberg (nicknamed Raye) was born in Sion, Valais, Switzerland to an Orthodox Jewish family of German origin. She is [nearly] as old as David, befriending him early on, and has spent much of her life accompanying him wherever he went. Being a kind-hearted individual, who has a great distaste for power, she is a stark contrast to the interests of David, and probably, the least-likely candidate to becoming David's wife, acting as a marionette to him. She pretends to associate herself with David and his power-hungry struggle, when secretly, she helps others to rebuild the chaos which was left behind, as she is very heartfelt-religious. During the Cold War, however, she enlisted as a Stasi, and "patrols" with David on the streets of Berlin. With a fixed-relationship with Soviet Russia, she has encountered Mishya quite often and finds him quite like her, as they are both "gentle giants." They have a secret friendship under David's nose, as they collaborate with each other to topple David and his hopes for world domination.

They are truly symbolic of the Cold War attitudes in Germany and beyond.

(The process)
This is my favorite picture (currently in my gallery). It looks almost real. My heart was uplifted to the heavens upon completing this piece. In drawing this, I [practically] had a "Cold War" with myself, to finish this up (lack of motivation on some days, overtime at work, college stress, etc.) But I'm glad I paid genuine attention to detail on this pic, as the uniforms and setting were historically accurate, at best. I just let my creativity flow freely, as I had quite the experience making this. (Speaking of creativity, just try to find my signature "hidden" within this scene!)

(Flaws)
[These are the select few I could find.]
-Shade of blue for the sky and clouds (I can't draw clouds)
-[Exact] coloration of the Brandenburg Gate
-Facial markings on both David and Regina (as I tried to keep them looking as natural as possible)
-I don't know how to draw graffiti
[Inb4 Yes the graffiti is on the wrong side of the wall; I was taking some artistic liberties]

I think I [deserve] an honest critique for this.