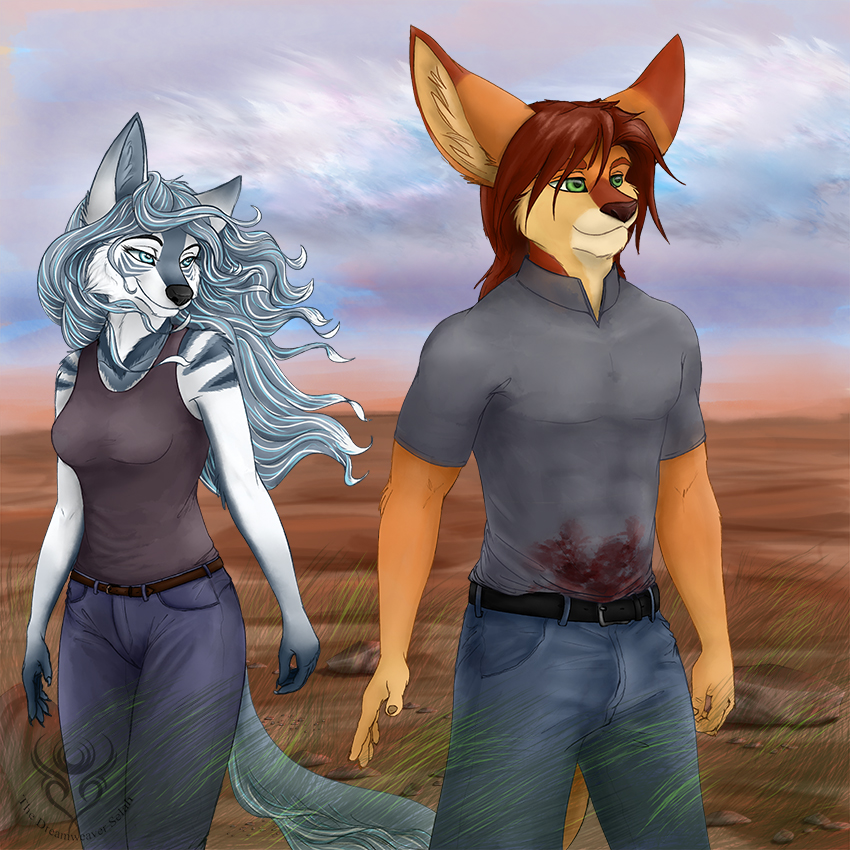 Raith winced in pain as he slowly adjusted his position. The more the adrenaline wore off, the stronger the ache in his wounds became. Sarhea’s healing touch had stopped the bleeding, but it would be several days before the puncture wounds themselves were healed up, even with her touch. At least with her help, there was no worry of infection or no need to bother Mouser when they got back to Refuge City. Raith inwardly cringed at the thought of the doctor; Mouser always claimed he was accident prone…He glanced down at his blood stained shirt. He would have to put his jacket back on before heading back to the ship if he wished to avoid questions. Raith’s ears swiveled back at the thought of putting the stiff garment over the raw wounds. Hopefully there was some remaining medical supplies stored on the bike that he could use to cover the punctures…

“How are we going to get back up there? This drop seems to extend for quite some distance and I assume it is too steep for your…contraption…to climb,” Sarhea muttered from beside him.

Her voice drew him out of his thoughts. Raith slowly glanced back to the cliff they’d just fallen over. For a moment, he found himself completely baffled. He raised a hand to shield his eyes from the blaring sun, but the sight before him didn’t change. Something was very off. None of the surroundings looked as they should. Raith shoved his fatigue aside as he pushed himself to his knees.

He felt Sarhea’s concerned scowl, but avoided her gaze as he slowly pushed himself to his feet. Turning from the steep incline to gaze out across the barren, dusty landscape beyond, his eyes locked onto the splintered remains of an old tree stump at the edge of what had once been a lazy flowing river.

“What the…?” he muttered and took a few hesitant steps toward it.

He paused and looked back toward Keylar City.

“Well, that explains a lot,” he muttered absently. “I wasn’t expecting that debris or that drop because I thought I was someplace else,” he finally replied as Sarhea stood to join him. “How the hell did I end up here?”

He idly scratched his head as he turned back toward the old stump.

“Where is here?” Sarhea asked quietly.

“Another place of fond memories. Seems there was more for me to share,” he replied and slowly started walking toward the stump. Vivid memories of how the area once looked played in his mind as he walked.

“I spent much of my childhood running wild and free along the banks of the river that used to flow in the ravine just beyond that old stump. Bud, Aleena, and I would spend the hot summer days swimming in the river or playing in the fields. All this land, from the base of the cliff to the river-as far as the eye could see-was covered in lush, waist-high green grass. Many a game of hide and seek and other ambush style games were played here…”

He walked along slowly, his hands brushing over the tops of the imaginary vegetation.

“When it got too hot, that tree-it was a huge old tree-it shaded us from the blaring sun. Bud and I even built a small fort up in its branches. It was our top secret clubhouse,” he continued with a chuckle and shook his head at the memory. It had been a pathetic excuse of a treehouse and it had been a miracle none of them had injured or killed themselves by falling out of it.

“As I grew older and the stresses of life began to gather around me, this was one of the few places I could find peace. I suppose it served the same purpose the observatory does for you. There was something so soothing about leaning against that tree, surrounded by nothing but the cool breeze off the water and the sounds of the wind through the grass. I wish you could have seen it…”

Raith’s eyes widened as Sarhea’s arm abruptly interlocked with his and she leaned gently against his side. Her gaze was distant as she took in the desolate surroundings.

“I think I can picture it. There was a similar place I loved back on my world. There was a huge tree near the river surrounded by tall grass. It actually served as my home for many years. The inside was hollow.”

“Really? That…must have been one big tree!” Raith exclaimed but then hesitated. “Wait…why did you live in a tree? Didn’t your tribe build any kind of real structures?”

Sarhea shook her head with a quiet sigh.

“They did, but as I mentioned before, because of what the Guardians did to me, I was not welcome among them. Because of Daran’s grief and shame, orphans became something to despise. To my tribe, I was nothing but a scavenging orphan, an annoyance they didn’t have time for, and had they helped me, they would have faced Daran’s wrath…” Her voice trailed off momentarily as she gazed out over the landscape. “I miss trees…” she mumbled absently as they arrived next to the remains of the old stump.

Raith felt a familiar, yet odd, manifestation of energy. He’d sensed it earlier as they walked through the crater. He glanced over to Sarhea and was surprised to see a hint of neon light dancing in her eyes.

“Can I ask what you are doing right now? You are connecting with the energy again, like earlier in the crater…”

Her energized gazed turned to him with a quizzical glance.

“I’m not entirely sure how it is happening, but my energy is interacting with yours.”

Raith arched a brow as he watched her in silence, waiting for her to explain. A hint of an amused smile played at her lips.

“Somehow, I’m seeing hints-ghost images if you will-of what you are seeing. It’s like…like through the energy, I’m being shown your memory…or at least a version of it. Though I have to imagine my own colors…”

“Really? You can do that?

The light faded from her eyes. “I guess I can now.”

“So…back in the crater…Is that why you asked what it had been like? Could you see New Leonia as well?”

Excitement surged through him as a pleased grin spread across his lips. How he’d longed to be able to show her any glimpse of what his world had once been like and thanks to the energy, it now seemed to be possible. This was one new development of her abilities he was eager to explore and he found himself itching to start. But first, he would have to complete the rest of his required tasks. Raith turned to look back in the direction they had come. They would have to travel several miles downstream before they would find a path with a gentle enough slope for the hoverbike to make it safely back up to Keylar.

“Come on, it’s past time for us to get back. The others will most likely be calling any time now,” he muttered, trying to keep his excitement at bay. He wished he could spend all day here, showing Sarhea the way things used to look.

“Do we have to…get back on that machine?”

The question brought a smirk to his lips. “Unless you wish to walk many miles, then yes. And that doesn’t change the fact that I still must get it back to the ship. I’m not leaving my bike out here. It’s the only personal possession I have left that survived the attacks.”

He had to try really hard to keep his smirking grin from widening at her very obvious displeasure at the idea. She’d been the same way with the gliders until he’d taught her to operate one. A sudden idea struck him.

“I can teach you to drive it, if you wish. Then you’d be in control of our fates for the trip back.”

The only response he received was a critical glare, but there was no protest. He could not contain a wiry grin as he turned back to where the hoverbike waited.

Folder:
Children of the Light « Older

And...Omg...Hell has just froze over...Selah did proper arts for once-shading, background and all! I cannot recall the last time I've done such a task...it has been years...

Thanks to the very awesome

, I've come across some awesome brushes that I feel confident to begin trying to paint once again....But anyway-On to part 2 of this little side story! Part 3, along with another piece of commissioned cover art, will be posted sometime this week...

Raith, Sarhea, CotL, and artwork © ME