Page X: The Rift -- by draconictoni and gatogato by Rooth 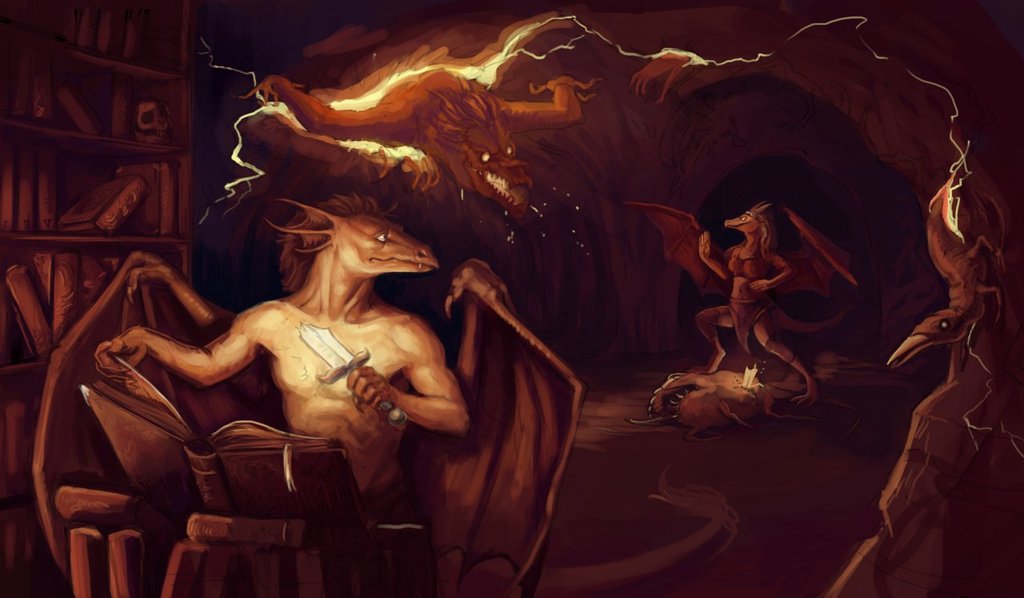 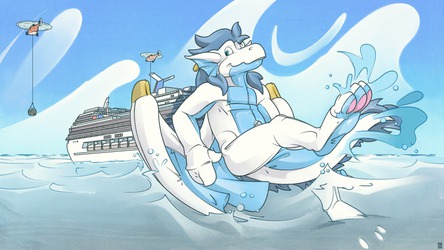 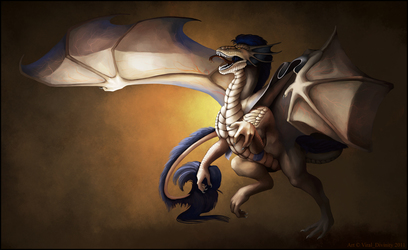 This is a collaboration between:

This scene is Page X of an epic story that will unfold with future commissions, with the artists of those commissions playing a major role in deciding where the story goes. (see here for a full explanation of how that works).

Here we have Aram and Rooth'ragon, two characters from different worlds brought together by an accidental tear in space and time. Aram was using a magical sword to open a rift to an outer plane in her role as protector of the Prime Material. When she used the sword to return to her home plane, something happened. The sword broke, creating a flaw in the rift that not only sent her to the wrong Prime Material plane, but also left the rift ajar, allowing a trickle of demons to find their way through to Rooth's world. Which hasn't seen much in the way of demons, thus putting Rooth in a bit of a panic. Aram, well practiced in the art of demon slaying, faces them down confidently, but how long can she keep that up? Rooth hurriedly skims through his arcane tomes looking for a way to leverage the magic in the broken sword to mend the rift and save his cave, his life, and perhaps the entire planet!

Some background info over the process and some thoughts on this:

So Rooth wanted us to work with these two characters, the foreground dragon is a rather intellectual, philosophical dragon, Aram is a martial artist.

Both come from different worlds.

We had to pack a lot of info into this picture, we wanted to show how these two characters came together and additionally each characters individual strenght.

We thought long and hard of a story that brings those two together, and not only this, we wanted some action and tension in this picture. After a lot of discussion we decided for this:

Aram found a magical sword that could rip through dimensions - as she swung the sword it broke and a dimensional rift openend, catapulting her right into Rooths cave-home. But it seems there are creatures lurking in the inbetween-dimensions, Aram caught their attention and they came with her through the rift. Aram does her best to fight them off to give Rooth enough time to check up on the magical broken sword and on dimensional rifts to get this thing closed again. How will it go on from here?

We don't know, that's in the hands of other artists. Rooth will take more commissions for this storyline, make sure to watch him for the forthcome of the story.

Then it went to the compositional phase, this was a difficult one because we had to put so many clues in there so that the picture reads well (3 characters at least, dimensional rift, Rooths home and books, magical broken item and the connection between the item and Aram, character specific poses and important things like tension and mood).

I really busted my buttocks for this and Toni helped me out a lot.

There's something interesting in the way of the composition - Toni and me planned a heavy storytelling picture, with a lot of elements and clues going on. I work usually with far simpler compositions for serial pictures (comics, series) that have a different flow and a lower density so I tried to adapt the rules of dynamic picture composition and if you look close enough you'll see a sort of oval composition in depth (Rooth with sword, wall creature on right, Aram and ceiling monster back to shelf back to Rooth).

It's a rather secure, traditional way of showing things and I wasn't too happy with this kind of composition at that time, but it grew on me.

The details in this one really should be seen for themselves, it shouldn't be swallowed within 10 seconds like my other pictures are intended to.

After this Toni and me went into heavy research for colors we wanted to have here - we looked through a lot of picture and decided for a fire-themed colorscheme that fits the cave and the tense situation.

We're at an almost monochrome scheme now, inspired by a Rembrandt painting, mainly because we found out that action in pictures comes mainly through the work with values - and because this beast of a picture would have been a lot harder to handle with all the things the viewer needs to focus on.

After that it was a lot of fixing of details- I#ll upload some WIP pictures to the scraps, lateron.

The rest was my job, tie the things together, add textures and floor to make the cave more cozy.

Watching out that all values and colors come together. Whoa.

But finally, finally, it was done C:

There's a lot of brain work in this picture that isn't visible from the outside, but I tell you, at least half of the work is done before the first storke is set.