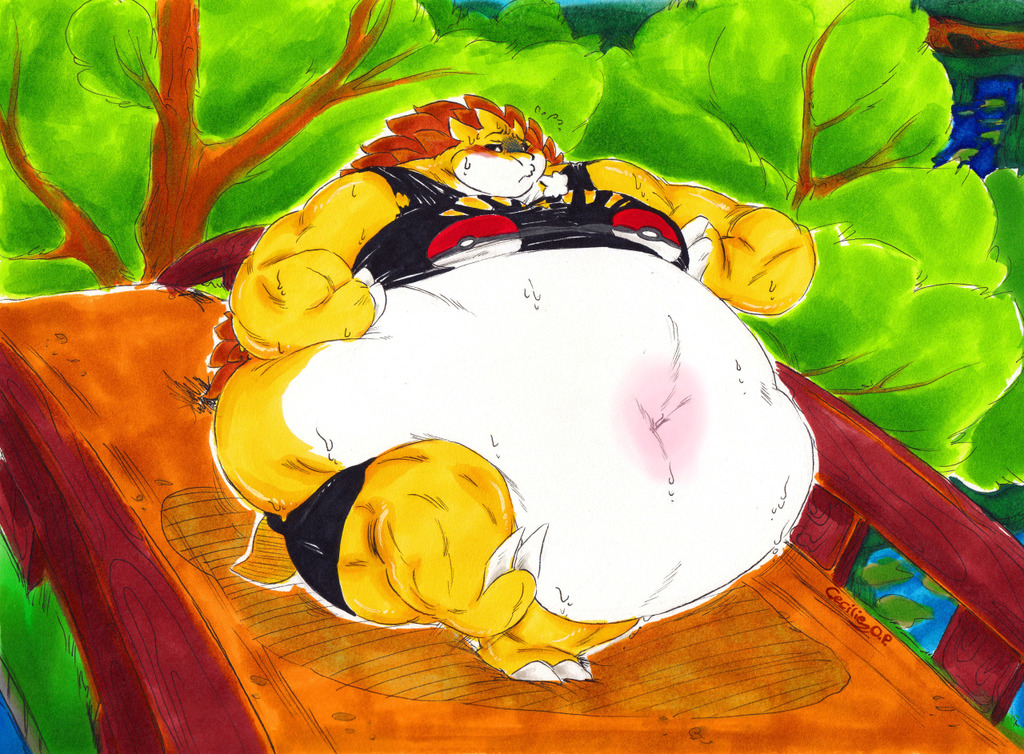 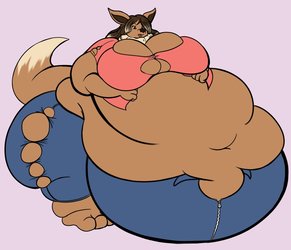 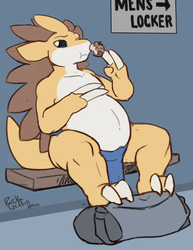 Some time back I gushed at

! about the absolutely amazing art she does and promptly snagged a commission from her! I'd say it turned out better than I could have ever hoped and, while I always include blurbs with each post, I especially wanted to get around to doing so for this one!

Be sure to give the original posting some love here! https://www.weasyl.com/submission/1373097/its-not-easy-to-love-heavy-food

Arms swinging side to side, bloated biceps chafing against his plump pectorals every time he did so, Sean panted with every lumbering step forward. “Really shoulda gone shirtless for this workout…” the Sandslash moaned as he peered down at his taut tanktop. Flimsy black straps of cloth that were audibly tearing apart thread by thread wrapped around his broad shoulders. Folded rolls of fabric rested atop the Ground-Type’s heaving gut that gurgled and sloshed with his every thooming footfall. To Sean’s dismay, the snugly fitting tanktop was more akin to… to… well. For all intents and purposes it looked like a bra on the bloated behemoth.

“Gaaaawwwwwrdevoir, and of course I wore the Pokeball one!” he chastised himself aloud. Those sandy cheeks of his Camerupted bright red while his beady black eyes scanned ahead. The Sandslash forced out a sigh of relief between his strained breaths. Thankfully, Sean had little in the way of company come crack of dawn. Kakuna and Metapod, dangling from silvery sinews of string, noiselessly swayed between the lushly canopied trees as a gentle breeze wafted through Vermillion Park.

“Stupid Silvia…” he grumbled under his breath as his cheeks puffed out. His pointed ears folded down shyly against the earthy scales layering his skull. Sean’s eyes narrowed at the thought of the swollen Salamence that had since waddled and wedged herself into the daily dealings of his pristine Gym. She was a corrupting influence. Encouraging if not outright egging him on to indulge himself and cheat on his rigidly enforced diet. Pushing him to skip working out for so much as a single day and lazily lounge about. The gall of that gargantuan woman! He pursed his lips when he tried to peer down past his chest. A taut and tremendous gut, a veritable hill of white furred flesh, filled his vision. Ideally, he would have liked to see his twin clawed feet loudly pounding against pebbles. Sean groaned at the sizable sign of Silvia’s success in wearing down his resolve.

He huffed when his knees knocked against the underside of his gut. The shick and shuffle of pebbles underfoot gave way to wooden creaks and groans. “Mmph, forgot about this bridge…” Sean gulped. Scrunching his shoulders in embarrassment, the Sandslash winced when he felt planks bow and belch out clouds of splinters beneath his leathery soles. “Oh thank goodness,” he exhaled in relief.

Sean’s heart pitter pattered at the thought of collapsing through and crashing down into the babbling creek just beneath his thick feet. Not yet. He hadn’t exceeded the weight limit just yet! Teeth clenched, he inhaled through his teeth when he felt his belly brush alongside the handrails lining both sides of the bridge. His bloated belly, sagging against his shins, drowned out any structural signs of distress with its roaring gurgles. “No!” Sean hissed in reply. Fist clenched, his two clawed fingers and thumb curling against his calloused palm, he swung at his stomach. His strike merely bounced off of the taut mass of fat and muscle. Agitated, Sean’s gut growled angrily in response.

“Never used to act like this before she showed up,” he scoffed at his stomach. “F-fine. Path empties out just before the Vermillion Bakery anyway. One loaf of Poffin should be plenty,” the Sandslash rationalized to himself. Silvia having all but force fed him those puffy, filling, and absolutely decadent loaves of sugar coated bread whenever she swung by his Gym and forcibly imparting an appetite for them upon him. “Damn her,” he pitifully cursed to himself as he struggled to imagine going even a single morning without one of those tasty treats. Sean unconsciously licked his lips as he mulled over the various flavors he’d have to choose from. “Probably end up plodding over there just after they open. Mmmfff and everything would still be warm and freshly baked and it’d be a hell of a wasted opportunity not to take advantage of that... O-okay. Maaaaybe two.” Hands resting atop his gut, the Ground-Type twiddled his claws as he cleared the now battered bridged pocked with his craterous footprints. “Or three. We’ll see,” he shyly conceded.