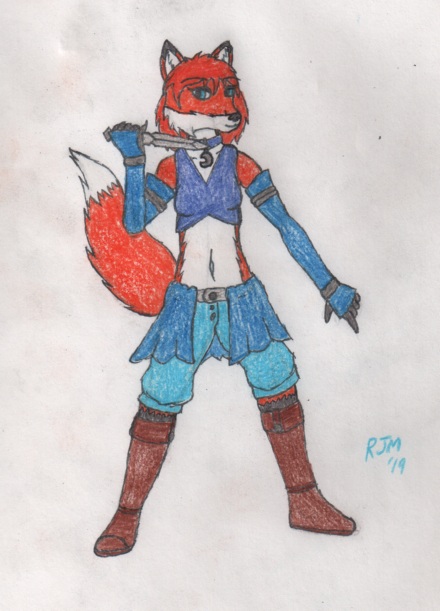 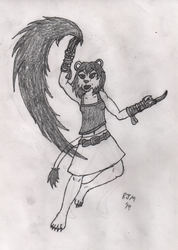 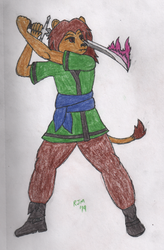 In a similar fashion to drawing Raziya with the construction method, I decided to do the same with her beau. Not totally sure where Maia popped into my designs, but I do like her a lot, just as Raziya too likes her foxy fox. Of all the B-list characters I've had in recent times, I feel like Maia herself isn't strongly defined. She's just kind of handled as Raziya's girlfriend, and doesn't go farther than that in outward lore.

But despite this, she's likely the most static character I've had in my recent era of artwork. Even when experimenting with different names, abilities and designs for my characters, Maia's lack of fleshing out also lead to her having the most staying power as she is. Why fix something that ain't broke, after all? Even as Raziya changed from being an arcane trickster to a monk, Maia has inherited the illusory talents of her lover.

Her fantastical costume, though more detailed than I used to draw it, is also an evolution of her original design. Her sleeves, inspired by Renamon's design, are still there. Her crop top too is still there, and so are her half-skirt, shorts and knee-highs. The only addition from her design from this year prior was her crescent-moon choker, defining who she is more clearly. Her weapon choice has fluctuated a lot, but I think I can settle on a ritual dagger (not unlike pre-monk Raziya's) as opposed to a hunting sword or rapier. Direct combat is not her MO, by both martial or magical means.

In adding detail to Maia's design, I also feel I should add a blurb about she's become in my mind. I've written backstories for both Jengo and Lovella (both of whom I wanna redraw in the near future), but never really wrote one for Maia. I'd prefer to not set anything in stone without actually featuring it in a story, game or whatever; Jengo and Lovella's backstories have elements I'd want to tweak, but are good starting points. As such, there is a vignette about Maia below. In closing before that vignette, it is refreshing to demystify an under-utilized character, even one that is as dear to my favorite imagination-child as she is.