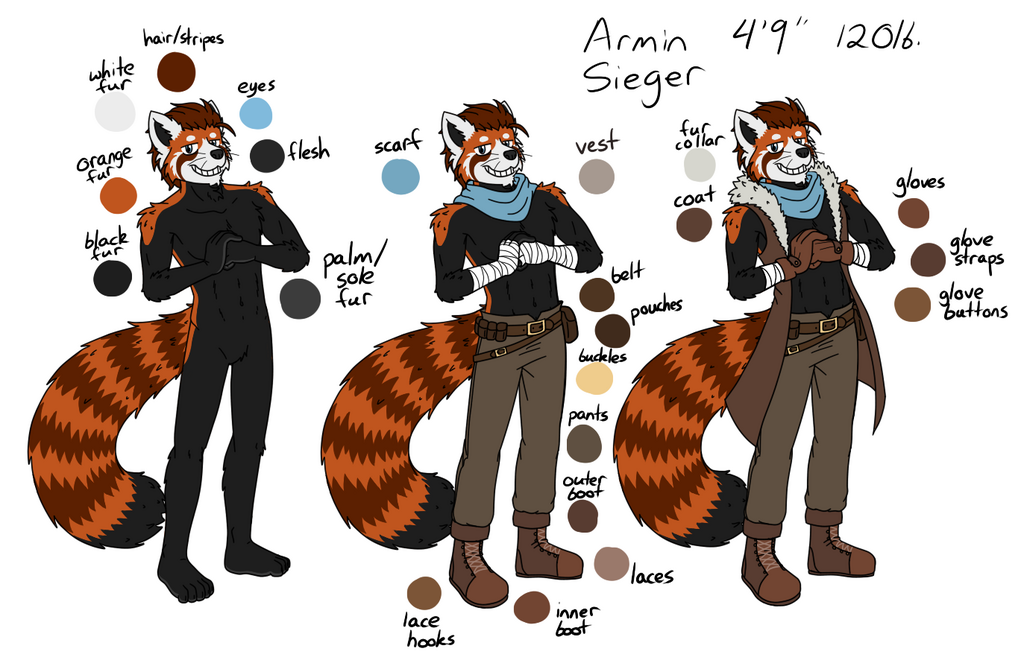 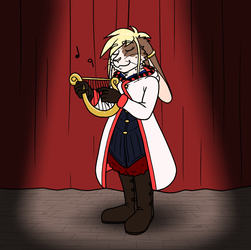 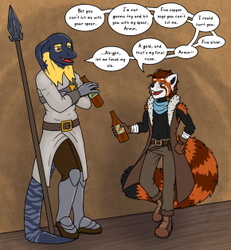 Alright, well, I've wanted to do a proper reference sheet of this guy for a while, but I've yet to find time for it since I finalized this concept/proto-reference back in August last year, so I'll just post this now.

You may recall from a couple of years ago that I posted two concept pictures of a character named Armin Blair that I intended to be my next character in the long-running Pathfinder game that I've been a part of that included my characters Talbot the wolf wizard and Milo/Haidar the cat gunslinger. Well, almost four years after drawing the original concept and two years after posting those original concepts, I finally completed the design, backstory, and everything else for this character last year just in time for that third campaign to finally start. Now renamed to Armin Sieger, this is the red panda rogue/monk gambler/boxer character I now currently play!

Fair amount of changes between this final product and the 2.0 version I posted two years ago. He's still a red panda, but I increased his height a tiny bit to 4'9" and gave him both a new haircut and a new wardrobe. I've always liked the slicked-back kind of hairstyle with a lock or bang or strand of hair coming down from the hairline, inspiration stemming from random weird places, mostly Aizen from Bleach, Vergil from Devil May Cry, and a little bit of Armstrong from Metal Gear Rising with the strands of hair coming down from the hairline.

The wardrobe took a looong time to decide upon, and there were actually a ton of variants I made and was very indecisive over, mostly in what the coat/vest he'd end up wearing. In fact, I was so indecisive that, originally, when the campaign started, he was wearing a vest along with his sleeveless coat, but I got rid of it after a number of sessions so he was shirtless. The final wardrobe here had a number of inspirations as well, the scarf being a bit of a leftover from when Armin was still half-ninja and me just liking big scarves in general, the coat being inspired by things like Dante from Devil May Cry, Gene from God Hand, and Greed from Fullmetal Alchemist. Lastly, his boots are meant to be similar to boxers' shoes, and his gloves are meant to both protect his fingers from the cold and from injury like boxers' gloves.

I'll leave further details about things like his class/abilities, personality, and backstory for other pictures of him that I have and will upload, like I did with Talbot and Milo. For now, I'll just say that I really ended up agonizing over this design for a long time. Like I said, it was four years in the making, and much of the final design work was within the last year of those four. Was a lot of indecisiveness and possibilities, but I'm pretty happy with how his design turned out.