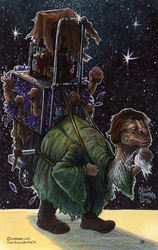 Here's my old pal Furlag, prolly the best throw-away, comicbook character ever to get ejected into the vacuum of space by Boba Fett. He was a bounty hunter featured for a few pages in the '90s Star Wars " Shadows of the Empire " comicbook series. I believe he's in issue 4 although the back of his head appears on the cover of issue 2. Back in the late '90s, I did a custom action figure of this guy who was featured in the old Toyfare magazine.