Veve of the Rougarou (Cajun Werewolf) by Nashoba Hostina 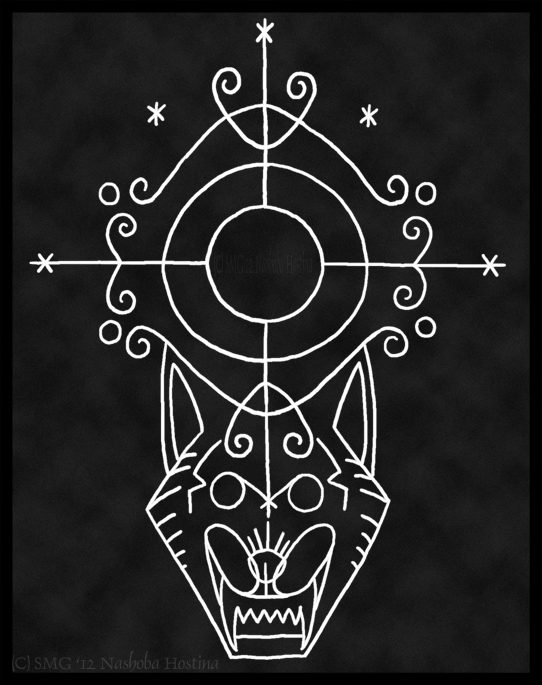 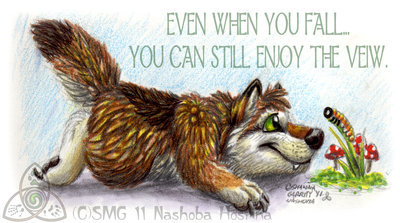 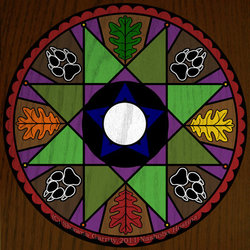 Veve of the Rougarou (Cajun Werewolf)

Okay, so, technically this isn’t a Vévé; it’s a plan for one. I doubt I have anyplace large enough to make this a proper Vévé… Though… I guess someone here may not know what a Vévé is. Maybe I should explain that a little.

A Vévé (also called a vever) is a ground drawing… usually done by sprinkling a powdery substance, such as flour in thin lines, though the actual drawing medium changes depending on the ritual. They’re used In Voodoo ceremonies involving Loa, or, Lwa (spirits) and, depending on what you read or hear, they attract, represent, and appease the Loa. Voodoo traditions largely evolved from the combination of local traditions and magical practices from those brought over from places such as Europe and Africa, and the influence can be seen in some of the designs. The appearance of Vévés vary greatly… some are, visually speaking, non-representational, being abstract, largely geometric figures, while others are perfectly representational, such as the man for Gran Bwa’s Vévé or the ship for Agwe. In addition, offerings to the Loa, such as food or drink can be sat on or poured upon the Vévé. After the ritual is completed, usually the Vévé is destroyed (though sometimes Vévé are done in more permanent mediums, like metal and such).

Of course, it is supposedly a risky business, working with the Loa. For instance, in some cases, the Loa will manifest itself through possession of one of the members present at the ceremony. Now… something I find interesting, is that some (But most certainly not all) scholars, such as Montegue Summers, mentioned that lycanthropy may be a form of demonic possession, something that has been seen in antiquity as well as in more modern times. One such case is that of Bill Ramsey, whose lycanthropic fits were cured only after an exorcism. Now, I know that these two things, the Loa of Voodoo and my usual subject of interest, lycanthropes may seem a bit distanced from one another. However, Luckily for me, displaced French Canadians settled in the southern USA, bringing with them stories of France’s Loup Garou, or werewolf, effectively putting them in the mix with good ol hoodoo, voodoo, and generic swamp conjurers.

Over time, the spelling and pronunciation of the beast’s name began to vary and change, and it can be seen spelled as Loo Garoo, or even Rougarou. (I tend to prefer this name, because it makes it easily distinguished from the French variety.) The Cajun breed of lycanthrope has taken hold of the folktales of the south, and, luckily for werewolf lovers like myself, it is likely there to stay. This creature (depending on where you go) is sometimes described as being a little dog or fox-like, but is often described as being a typical werewolf.

Details about it vary… some say that it is a cursed man, forced to be a werewolf for a specific amount of time, (for instance, 101 nights) but that this curse may be lifted if someone recognizes who the werewolf is, and, sometimes, draws his blood. This is similar to other werewolf remedies, however, there is a catch! Neither may speak of it until the remainder of the curse’s time is spent, or the man will once again be cursed. However, not all Rougarou are cursed. Sometimes, Rougarou will sneak into a home through the chimney (Kind of like a big, fuzzy Santa Claus), and bite the house’s sleeping occupants, passing on the lycanthropic condition like a virus.

Though, being such a creature isn’t without its perks. Hatian Loup-Garou are supposedly very gifted at shapeshifting, able to become just about anything they want, while Roogarou in Louisiana have a rather pleasant social life while in this wolflike form, gathering together in great packs not for hunts, but for dances and parties! As if that weren’t neat enough, these werewolves are able to arrive in style… each werewolf has a giant bat that flies them to wherever they want to be! (Or, maybe the Rougarou just want us to think they have giant bats because they’re cool ;D)

However, if you’re worried about a Cajun Rougarou getting you in the night, don’t worry! There are many ways to protect yourself from, or scare away these variations of the loup-garou. As it turns out, this breed is a little on the OCD side, and if you set a sifter, colander, or similar object outside your home, the werewolf will be forced to sit and count every hole before proceeding (this is similar to some vampire myths). In Georgia, spreading sulphur around your yard will repel Rougarou (not to mention everyone else). This breed also happens to be terrified of a very simple creature: frogs. Since they live in the bayou, I suspect this makes life for them difficult. However, it is said that throwing a frog at a Rougarou will frighten it into running away. Rougarous are also very leery of Swamp Witches, you know, conjure folk at the like. But, if you need some hardcore protection against Rougarou, the best weapon is something that you most likely have on your kitchen table: salt. It is said that if salt touches a Rougarou, then it will begin to burn the creature, and the werewolf will be forced to cast off its wolf form or skin, returning to human shape.

With this information in mind, if a someone wanted to become a Rougarou but didn’t want to be bitten or cursed, perhaps one could be created by the possession of a spiritual force, such as what happened to unfortunate Mr. Ramsey. Furthermore, I feel that it is possible that the spiritual force involved could be a form of Loa. Since Loa, as mentioned earlier, occasionally possess people in ceremonies involving Vévés, it may be feasible to become a Rougarou by inviting a Loa to make you into one. So, for the fun of it, I created a Vévé for just such a purpose.

When creating this, I started out with the circle formation… This is useful, because it is a basic geometric shape, and allows for an open space in which to leave offerings. However, in the proper context, it could appear to be a full moon. Since the moon is part of what affects some varieties of werewolf , including some French varieties, the ornamentation of the moon is incorporated into the shape of the wolf’s head. The ‘stars’ at the ends of the lines are there to emphasize the nocturnal theme, and both those, and curling shapes such as those that adorn the moon are common in some of the less representational Vévés. These ground drawings, due to the medium, also have a certain... imperfectness to them that I really appreciate. They're not strictly symmetrical, the angles aren't all precice, and it makes them feel more organic somehow.

Were it to be used in a ritual, I imagine that Bone Meal or blood meal would be used to draw the lines (Hey, don’t look at me like that. I use blood meal weekly in my garden to spook bunnies away and fertilize my plants. They’re perfectly normal things to use.) due to the carnivorous inclinations of the Rougarou. If offerings were to be made in addition to the Vévé, meat would likely be useful, though good alcohol couldn’t hurt either. Flowers, such as Azaeleas, Marigolds, or Lillies of the Valey may be useful too, since they attract werewolves, as do some precious stones, such as diamonds and rubies. However, I do hear that Rougarou have a certain taste for nutria.

If you read through all of that, kudos of putting up with me for so long, and I hope it entertained you… but if not, you should read some of these books: