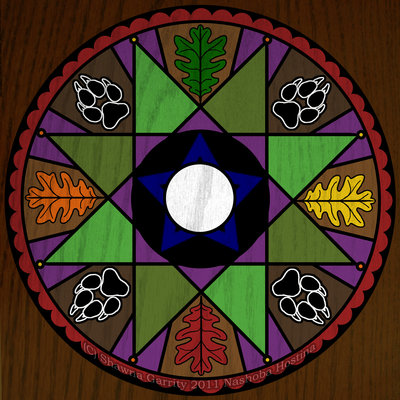 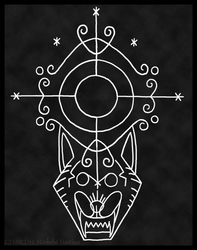 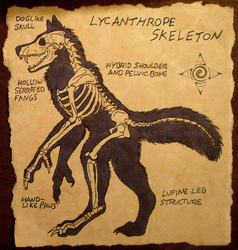 Well, folks, as you all know, I love folklore of all sorts, but most of all, I love werewolves. So, when I decided I wanted to try my had at making hex signs, of course I wanted to make one with some lycanthropic flair.

Though, well… having done a fair bit of research on werewolves, I know that hex signs don’t work when used to keep them away (Please see Linda Godfrey’s Hunting the American Werewolf). After all, they’re also called hexafoos, or hexefus, meaning witches’ feet. So, surely they’re intended to keep witches and evil entities away, right? At least, that’s what the churchbooth that was selling them at a local festival was saying they do. But is it true?

Maybe not. There seems to be a lot of disagreeing over the purpose of hex signs. Some books, like Don Yoder and Thomas Graves’ Hex Signs seem to be of the opinion that hex signs are largely just ornamental, though some assign special significance to them. Others, like Hexology by Jacob and Jane Zook say otherwise, down to having a list of various symbols and their meaning at the end.

Curiously enough though, some of the folks who seem to enjoy hex signs the most enthusiastically are just the ones some might claim the signs are intended to deter: witches. Or rather, modern pagans and wiccans, which, while different from the classical Christian idea of the witch, sometimes take on the title of witch regardless. Some pagan authors, such as Scott Cunningham and Ellen Dugan, somewhat ironically, used hex signs too.

This hex sign was designed to have meaning, based upon my research and my own intent (I had to pick and choose here and there, since not all sources agree on the meanings of particular symbols or colors). Since it seems that you can’t keep werewolves away with a hex sign, this one is intended to work with lycanthropes, to ensure that any efforts that either intentionally or unintentionally involves lycanthropes turns out for the best, be it trying to make art of them, be it trying to be one of them, trying to cohabitate the same lands with them, etc.

The circles in this are symbols of eternity, so the sign’s effect will last forever, and the scalloped border is intended to bring smooth sailing through life and beyond. The “spoked” circle inside the border is a variant on the “Wheel of Fortune” for good luck. Within that is an eight-pointed star that represents the cycle of the year, which I feel is significant since werewolves are often concerned with the passage of time, and the waxing and waning of the moon. The five-pointed star in turn is for protection against disaster, and represents the five senses, which if you aren’t a werewolf, you need to pay attention to, and if you are a werewolf, you want at your sharpest. The oak leaves symbolize strength, endurance, long life, and stability... traits anyone, human or werewolf would hope to strive for. There are four of these leaves, which I intend to represent the compass points and each season, which ties back to the eight pointed star. The circle in the center, is of course, something I added in to represent the full moon, and the very nontraditional wolf prints, one for each of a wolf’s feet, are intended to bring luck with all lupine efforts, which, in the context of a full moon, would mean all things lycanthropic.

However, that isn’t all: the colors have meaning in hexery too. The white, which I used for the moon and as a border around the wolf prints, represents purity (and the feminine which works out well for me) to tame the beasts in the vicinity. Green is for fertility, success, and good luck. Yellow is for creativity, and purple brings power and protection. Meanwhile red is for strength, love, life, and passion, while brown is for earthiness and the harvest (Always worth protecting!), as well as spirituality. Blue also represents spirituality, along with health, peace and, protection. All of these are good traits for humans and lycanthropes alike. Black is also used for protection in hex signs, as well as for unity, since the black borders tie everything together, hopefully increasing the “working with” as opposed to “working against” intent.

So, there you have it folks. Whether you believe in superstitious things like werewolves and the powers of hex signs, or are skeptical about such things, I hope that the hex sign is at least pleasing to look at.

I should have written an excerpt from Seamus here… but this is long enough as is O.o

Checks another project off of the to-do-list.