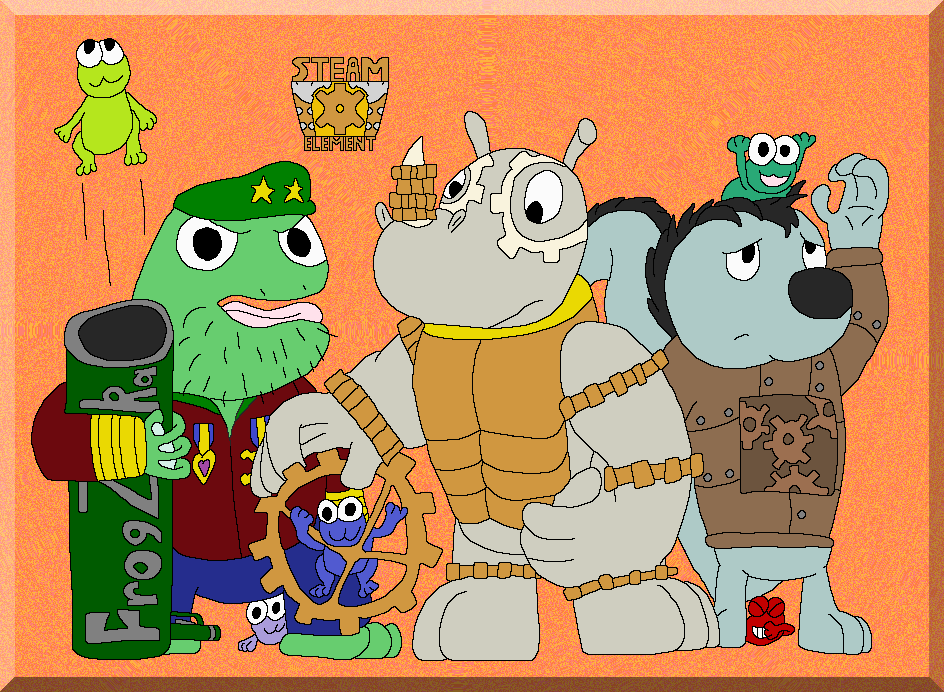 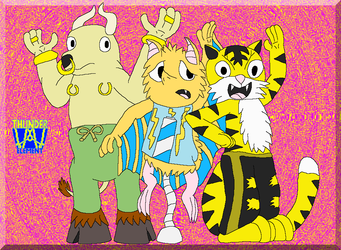 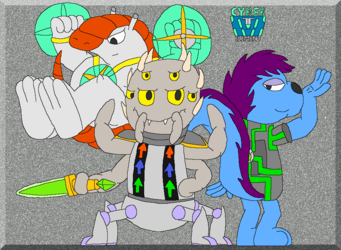 A silly drawing. The one on the left is Frog Launcher, an Major General who wields a bazooka that shoots, you guessed it, frogs. Gear head is in the middle. He fights with gears. Imagine that. Steam Skunk is on the right. He's a police officer who uses lots of different weaponry.

Name: Remus Agston
Nickname: Frog Launcher
House: Steam
Age: 49
Gender: Male
Species: Frog
Bio: Frog Launcher was the Major General in a large Army that was made to deal with an invasion of hideous monsters. Frog Launcher was a pretty tough cookie in the war, which is how he got his rank. In the war, he used a real bazooka for a week into the war, but it broke at the end of a long battle. And when he fixed it, he could not fix it so that it could launch real ammo. Instead, he used whatever he could find that was light and sturdy enough, and eventually found a way to use frogs in the bazooka. Because the bazooka gently flings the frog a short distance, and comes with parachutes equipped, the frogs do not get hurt.
After a successful war, Frog Launcher decided not to call it quits, and eventually found his way onto the force: The Elemental Force. Frog Launcher is one of the older members of the Elemental Force.

Name: Rupert Gierheidt
Nickname: Gear Head
House: Steam
Age: 27
Gender: Male
Species: Rhinoceros
Bio: Gear Head spends a lot of years on the road as a circus performer. He is considered the Strong Guy of the ring, being able to bend metal pipes and lift 500 pound weights. But something bad happened one show. One of the acts came in drunk and preformed poorly during the show, causing a riot which eventually lead to a fire. Gear Head, along with some of the other performers, made their start by saving people from said fire.
Afterward, the drunk was fired, and Gear Head got a raise for the rest of his career. But ever since, Gear Head wanted more in life. He enjoyed saving others, and wanted to do it again. He eventually quit the circus and found his way onto the Elemental Force, where he became caption of the Steam house. As well, his best friend, Battery the Bat who was another circus act known as the Rubber Bat, a bat who could absorb electricity without getting shocked, joined as well. The two often fight with each other and sing Metalica's Battery when beating up baddies.

Name: Tybalt Markson
Nickname: Steam Skunk
House: Steam
Age: 19
Gender: Male
Species: Skunk (Obviously)
Bio: Tybalt Markson and his twin sister Shelby Markson (AKA Cyber Skunk) are both members of a police force who grew up playing Cops N' Robbers as kids. They both always wanted to be police animals, and they both trained hard to become so. Each of them specializes in a type of weaponry on the force. And these two skunks are nothing like Neal and Lane, besides the fact that they're normal twins and not Siamese ones. Steam and Cyber are like the best of friends: Going together like PeeBee and Jay.
Steam Skunk deals with some old-fashioned technology. He wears a clunky metal suit and can wield many different weapons. As usually the case, he is stronger than his sister but also slower. Both he and his sister can get a bit snarky to other members of the Elemental Force.