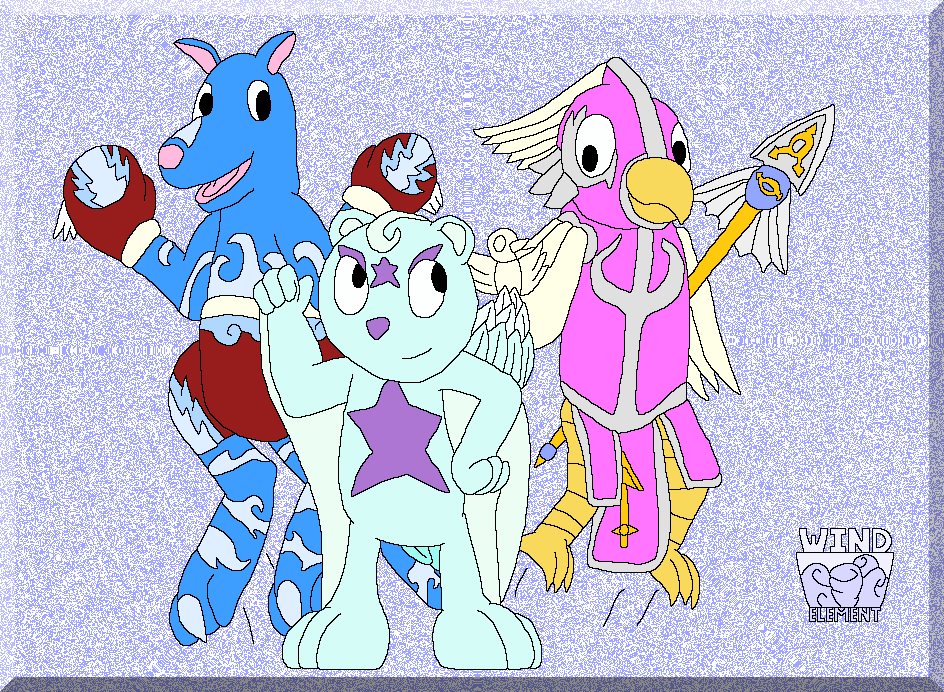 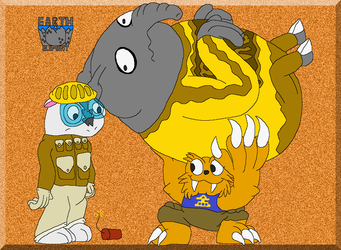 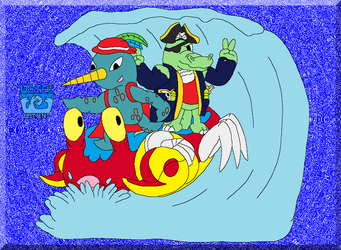 The elemental Force is quite big. 30 members and growing. Next we have High Five, the boxing kangaroo who can't control his magic," Flocktail, a flying squirrel who was a student at a magic academy (and has a questionably plain background), and Free Bird, a treasonous eagle who wishes to fight against her own kingoms war-like ideals.

Bio: Flocktail was always fascinated by magic. ...Well, Magic and birds. Flocktail spent a lot of time in magic school, learning to use spells. On her free time, she normally goes outside to look at the bird life in the forest. Ironic how some birds became sapient in Grah and Gina's world. But only one type of magic interested her: Bird summoning. She studied hard until eventually she could summon large amounts of birds from her tail. She would generally use her magic to have her friends fetch objects atop a roof or to annoy bullies and such. But her magic went to waste, overall. Like most pre-members of the Elemental Force, she just plain wanted more.

Bio: High Five always wanted to be a boxer. He trained every day to become a champion before joining the boxing league. But not wanting to limit himself, he also decided to dabble in magic as well, specifically wind magic. ...Unfortunately he would often use his magic accidentally in a match and get disqualified every time. After five straight disqualifications, he was banned from the boxing federation.

But eventually, High Five found a new start in the Elemental Force, where he continues to box and train. Except here, he gets to use his magic legal, so he doesn't need to restrain himself in a battle. ...But that may ruin his future as a credible boxer.

Bio: Free Bird is a young Valkyrie under the rule of the Harpy Queen, Ignatia Clavichord. She was sent out like a mindless drone to certain locations to slay random animals. But during her breaks, she asks the other birds "Why do we do this?" But every time she is given the same answer: We don't question, we just do it. It didn't take long for Free Bird to realize her sins, and the sins of the Harpy Queen. The Harpy Queen was a tyrant on a power trip. And as soon as Free Bird realized this, she fled from the kindom she lived in, and is currently on the hunt by the Harpy Queen's confidants and henchmen.

No one has caught the Free Bird yet. And feathers litter the ground from those who tried. Cause even though she runs away, she's no coward. She fights right on the spot when confronted by the Harpy Queen's henchmen. And many of her past partners lay down on the ground as corpses. And the few who learned to give up fighting Free Bird instead of persistently fight her returned to the Harpy Queen and were executed.

The word of Free Bird got around and one thing lead to another, she was eventually confronted by members of the Elemental Force. Free Bird accepted an offer to join the Elemental Force in exchange for a safe haven and extra protection from the Harpy Queen's minions. A rebelious spirit with a sharp spear as her weapon, she's quite a force to be reckoned with.