A perspective view by Mircea 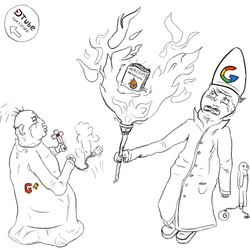 My response to the latest censorship scandal in the fandom. I won't name the artists to avoid involving them, nor the website in cause which should be easy to guess anyway. This incident was made special by the fact that several popular figures in the fandom have been banned without warning for something they've drawn... in at least one case this likely impacted the artist's life and ruined their career, since they've also lost a production group owned together with other users who weren't themselves accused of anything. The artists were not even punished for what they did on the site in cause, but for things that supposedly happened on other websites owned by entirely different people... one case involved an user lying to site admins about how tags on another art page worked.

The purpose of this image is to face the fandom with a harsh but clear reality about where we're headed: Certain furries are putting this fandom on par with humanity's most shameful factions and practices, for no reason other than to satisfy a grudge toward a community they stubbornly wish to associate with sexual harassment. A misguided vocal minority continues to demand the criminalization of art that's sensitive to them, recruit others into their persecution of artists, and literally destroy the lives of real people to defend those of fictional characters from fictional dangers. You can't burn books but not call it book burning, no matter how much you tell yourself "this time it must be different even if it looks the same"... have at least the guts to stand next to the people who's behavior you're imitating, as history won't erase itself to grant you your ignorance.

All images used here are under a CC0 / CC-BY / CC-BY-SA license while also being covered by the fair use exemption. The Nazi image is in no way used to promote that group which I vehemently oppose. The images were used to depict the communities they're referring to, and hold no references to any individuals that appear in them... the fursuit photo is over a decade old and I don't know any of the people involved in it. Feel free to do anything you wish with this submission under the licenses of the images contained. Original sources: