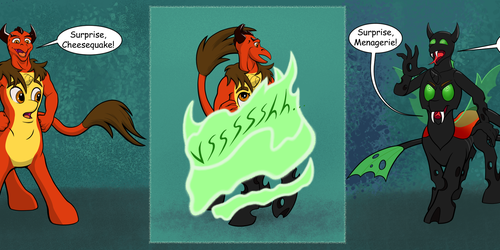 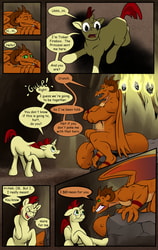 All aboard the furry train!

Ok, since this is a really long file, to see all of it without a microscope you’re going to have to click the download button. I don't know how well Weasyl handles really wide images.

Believe it or not this started out as a practice exercise. Back in 2008 I was having lots of problems with speed, and anatomy with different body styles. It would take way too much time to do anything. I thought part of it was working both the pose, and all of the details. This was before I figured out how to get a system for using references, and was just looking in books and getting close enough to what I was imagining. That took forever. I believed if I worked out a pose, and just used it as a template I’d redraw a lot of anthros over I’d be able to work on one issue at a time. Rather than have just a list of the same poses I thought a conga line would be cute and I could just add on as I did one. I hoped to do one each week or two, and set a limit around 52 which would last me a little a year while still being able to draw other stuff. Sort of a low speed ‘iron artist’ thing. But then I started to get bored with that idea, and thought up maybe 5 different poses and alternate, then I dropped that part altogether when I kept coming up with all sorts of neat little poses I wanted to do throughout the line and the whole concept began to grow.

Since it was supposed to be practice, I set up a few ground rules which I stuck to except for the few times I didn’t.

So, as I said I began it in 2008, drew the first three, but then I got stuck on the leopard and put it down for a while. Life got busy and I was working a lot of overtime and didn’t look at It much again until 2011. I worked through the leopard and then the boar soon after. I was also working my biggest, at the time, attempt at a sequence, and let it slide back into the background. However, It still floated around in the back of my mind and I pulled it up again in the summer of 2012. Seeing just the first five with this gigantic region of unused, empty white space behind them I decided I’m either going to do this, or I’m not. Then I worked up the taur, her riders, and the okapi in short order and finally began the habit of knocking one out every so often. Sometimes I’d take a whole weekend to get one done, sometimes I’d get on a good roll and get two to four of them in short order. Some years I’d get over 10 done, and others I wouldn’t touch it at all. Initially I did it with whatever creature was interesting me at the moment, but after I had gotten well into it I learned that SAI had an upper limit for canvas size, and it was far short of what it looked like I’d need for all 52. To handle that I came up with a scheme to draw it in two sections, then reduce it to the right size and splice them together so I’d have them all in a single image. To make best use of the space I had to plan it out though and plotted out the rough order and lineup I’d eventually use. I would have enough room for more than 52 so I added a few new ones. I started to notice a lot of empty, white space above them, especially when I got to the elephant, and thought about how to fill that. I was leaning against putting any insects in this because of their size, but I was inspired by that Fantasia short with Bacchus and all those centaurs, and I realized I could use the bugs in the same role as the cherubs.

Just about the time I got to the point where I’d need to break it, around the llama if your curious, I got Clip Studio Paint which didn’t have a canvas size limit, at least not one that was going to affect this anyway, and could leave it at its native size in a single file. I was considering still reducing it to that rough 2/3rds size anyway to make for a little easier viewing once it was done, but that’s around when I learned that FA was now autoscaling things, and people had begun looking at pictures on devices other than standardish sized monitors. So, I leave it to the viewer to look at it at whatever size they like, and leaving it as it’s largest resolution so you can see all my glorious detailing if you want. You just have to do some extra downloading steps.

During this whole process I learned a lot of things about many different critters, and even discovered a few new ones I never knew existed. I had a lot of misconceptions for the general sizes for some of them, and a few I didn’t catch until I had drawn them out. Platypus are not nearly as large as I thought they were. So, if you don’t recognize everything up there, I’m leaving a guide.

This thing is so gonna show up when anyone makes a species search for most anything. :P

From left to right.