I'm a female furry from New England. That's all really.

I used to write a lot throughout grade school but fell out of practice once I hit college. Now the writing bug has bitten me once more and I want to dive in and see where this journey takes me.

I hope that you enjoy my works! As always, criticism is welcomed <3 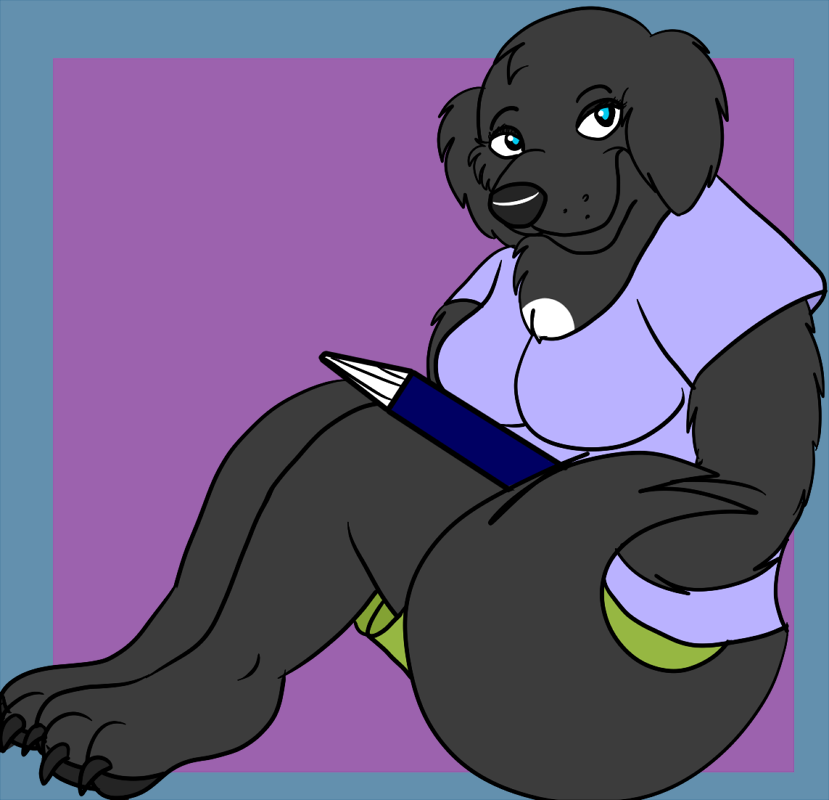 The story is familiar: I was unpopular, I kept to myself a lot, and I read and wrote story after story to pass the time.

I think the first real anthropomorphic story-line I came up with was in Kindergarten when a classmate and I pretended that we were police huskies (hey, I come from Connecticut! Go UCONN!). These police huskies would run around and stop crime from someone robbing an ice cream store to someone cheating at checkers.

Needless to say he got bored with it and went on to play ninjas with the other boys. When I got bored of running around by myself, I would bring a book outside with me, sit under the big maple tree, and read. I even won an essay contest in fifth grade at the local community college and got to take a free course there because of it.

During middle school, I won the "Most Avid Reader" award in my grade. I wasn't going to dances or having my first kiss. I wasn't playing outside during recess. I would still be under a tree with my book. Those years, the Harry Potter series capture and stole my imagination. That was the year I made my first "fursona-like" character, a Newfoundland dog named Padfoot (oh so creative) that was a student and mistakenly got sorted into Slytherin, despite not having any qualities of the house.

During High School, I dove into the art of "fanfiction". While not the most creative, I focused my works on fandoms for the pairings that I loved. My friend and I would trade stories back and forth to read and edit and post on forums and fansites. I enrolled into every creative writing class and fictional literature course that I could take and wrote story after story. I remember one instance where we were instructed to write a two page short story and I ended up coming in with something around twenty pages about a female soldier in the future who was stuck fighting her sexuality and attraction to a friend while fighting the dangerous environment around them.

I laugh at how terrible the writing is now but, then? Then I felt like I could have made something with my work. It was going to be a book series. I still have the notes somewhere.

Once college hit, for some reason, the magic was sucked away and I never really wrote again. I can't explain what happened, whether it was just became a chore or I lost confidence in myself, but it just stopped.

I never really wanted to go anywhere with my writing. Even when my teachers would press for me to keep working at what I had and enter writing contests, I just wouldn't. I didn't see the point in it. I had a short story of mine published in an anthology in tenth grade and, honestly, I can't tell you the name of it. I just let it go by. It was something I had rushed to get in, since it was part of the course, and I never thought it was my strongest work.

I regret not knowing the title of that book.

I "officially" came back to the furry fandom in late-2007 after finding FurAffinity and learning what "furry" was exactly, save from me finding the sites of fursuiters and sites such as the Lion King Art Archive and Yerf when I was younger. When I came back, I never looked at the aspect of writing in the fandom. I jumped in on the art and the fursuiting but never the writing. Sure, I've written a couple of blurbs here and there but I never thought that they meant anything or were actually good.

When I started hearing that they weren't bad, that maybe I had something here, something sparked.

I wanted to get back into writing.

I would like to thank those who have inspired me to start writing again.

To my dearest friends, especially those who are writers, thank you for lighting this spark.

To my wonderful boyfriend, thank you for pushing me to finally dive in and for listening to all my fears about starting this project.

One thing that I do know is that I'm ready to take this adventure.

Thank you, dear reader, for accompanying me on it whatever path we go down.

All the best to you,