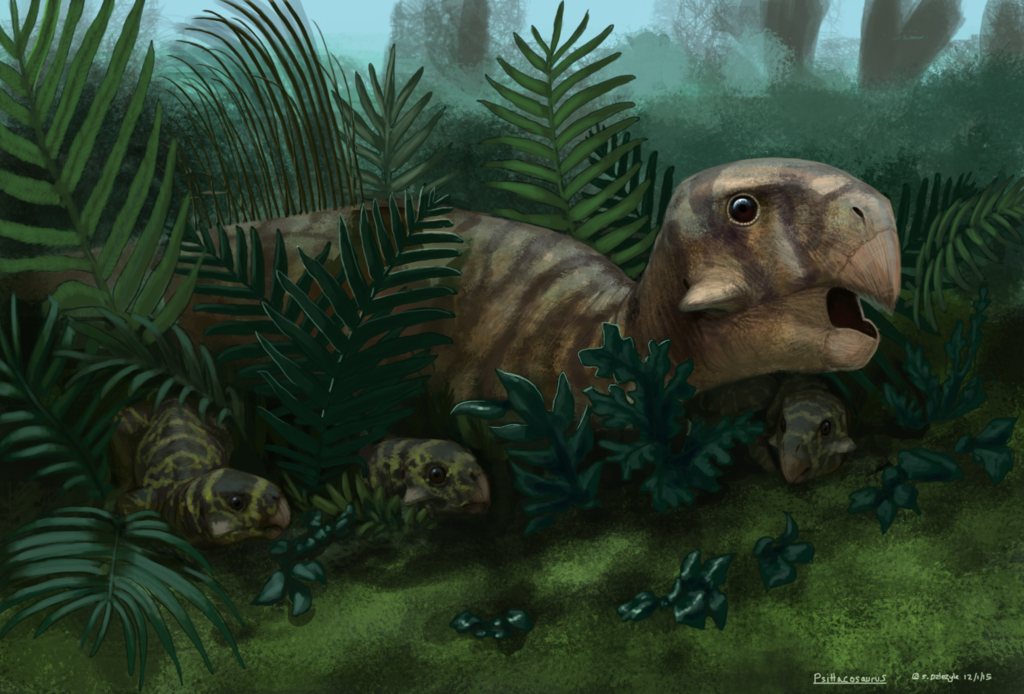 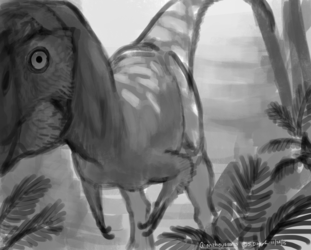 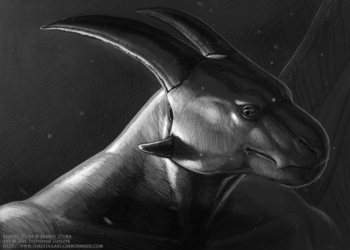 28, 29, and 30 all in one image. A subadult 'caretaker', showing stress with an open beak as it pants, keeps an eye out for a nearby predator as the hatchlings hide in response to the subadult's cues.

"The find of a herd of six Psittacosaurus individuals killed and buried by a volcanic mudflow indicates the presence of at least two age groups from two distinct clutches gathered together. This find has been taken as evidence for group fidelity and gregariousness extending beyond the nest; the earliest such evidence for any ceratopsian.[21] Even very young psittacosaur teeth appear worn, indicating they chewed their own food and may have been precocial.[19] Another juvenile-only cluster shows that specimens of different ages grouped together. These juveniles may have associated together as a close knit, mixed-age herd either for protection, to enhance their foraging, or as putative helpers at the parental nest.[22] There is no evidence for parental care.[23]

In 2004, a specimen found in the Yixian Formation of Liaoning Province, China was claimed as evidence for parental care in dinosaurs. The specimen DNHM D2156 consists of 34 articulated juvenile Psittacosaurus skeletons, closely associated with the skull of an adult. The juveniles, all approximately the same age, are intertwined in a group underneath the adult, although all 34 skulls are positioned above the mass of bodies, as they would have been in life. This suggests that the animals were alive at the time of burial, which must have been extremely rapid, perhaps due to the collapse of a burrow.[20] However, a 2013 paper pointed out that the adult specimen did not belong with the nest, its skull having no sedimentary connection to the main slab where the juveniles occurred, but had been glued onto it. This artificial association led to the inference that the skull belonged to an individual, possibly a "mother", that was providing parental care for the 34 juveniles - a claim that is unfounded. Furthermore, the adult was also shown to be six years old, whereas histological studies have shown P. mongoliensis was unable to breed until it reached ten years of age. It is also unlikely that a single female would have so many offspring at one time.[23]

Art © 2015 Stephanie Dziezyk. Do not use for personal or monetary gain.