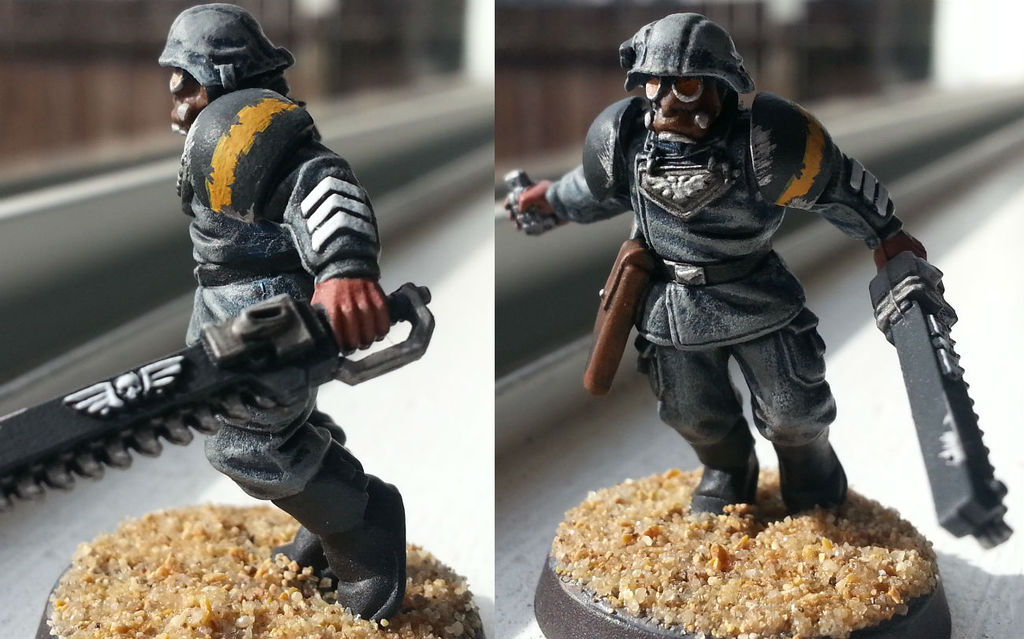 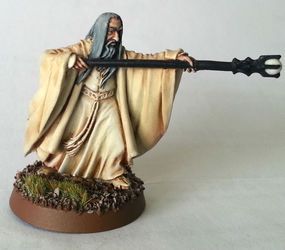 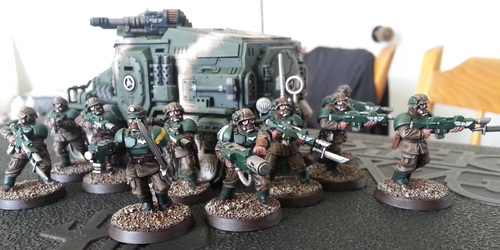 It may come as some surprise, but I've never actually done a grey Imperial Guard army. They're either green or brown, with the bright red Mordians filling in the 'outlandish' colour requirement for at least one contingent. That said, I've always quite liked the idea of doing an urban themed Guard force, fighting their way through close terrain and getting stuck in with bayonets and flamers, but the problem is that the traditional 'grey and black' urban look isn't terribly appealing. It just looks bland, I've found.

Enter this cunning plan! This guy clearly isn't finished - please don't look too closely at the base, for example! - but he's pretty much nailed the quick method of how I'm going to paint up these guys with the gasmasks. Finally. It's only taken a couple of strips and repaints... Ahem. The fatigues are actually a dark blue drybrushed heavily with a just off-white blue, while the armour is prepared with a great shade of Grey Black from Army Painter. That stuff covers aaanything, it's fantastic to work with. Once I've got the metallics primed with some silver and both gas mask and any equipment in a flat brown, I wash the entire miniature in Nuln Oil, the magical shade. Then it's back to do some chipping and block in the visible flesh. I'd thought about painting the guys with gloves, but as one or two miniatures in the force are going to have more visible skin, it made sense to make their hands visible.

The yellow stripe was a bit of fun, too. Using the curvature of the shoulder pad as a guide I was able to get it fairly straight, then blocked it in... and started chipping into it with the basecoat grey to give that battered, used look. The drybrushing is pretty visible from these close shots, but on the table he looks decent, and with eighty of his friends he'll look pretty awesome! Just need to figure out how I'm going to paint the bases and I'll be sorted for the new Imperial Gua-... ahem, sorry, Astra Militarum release!