rubber umbreon suit experiment 2 by How2101 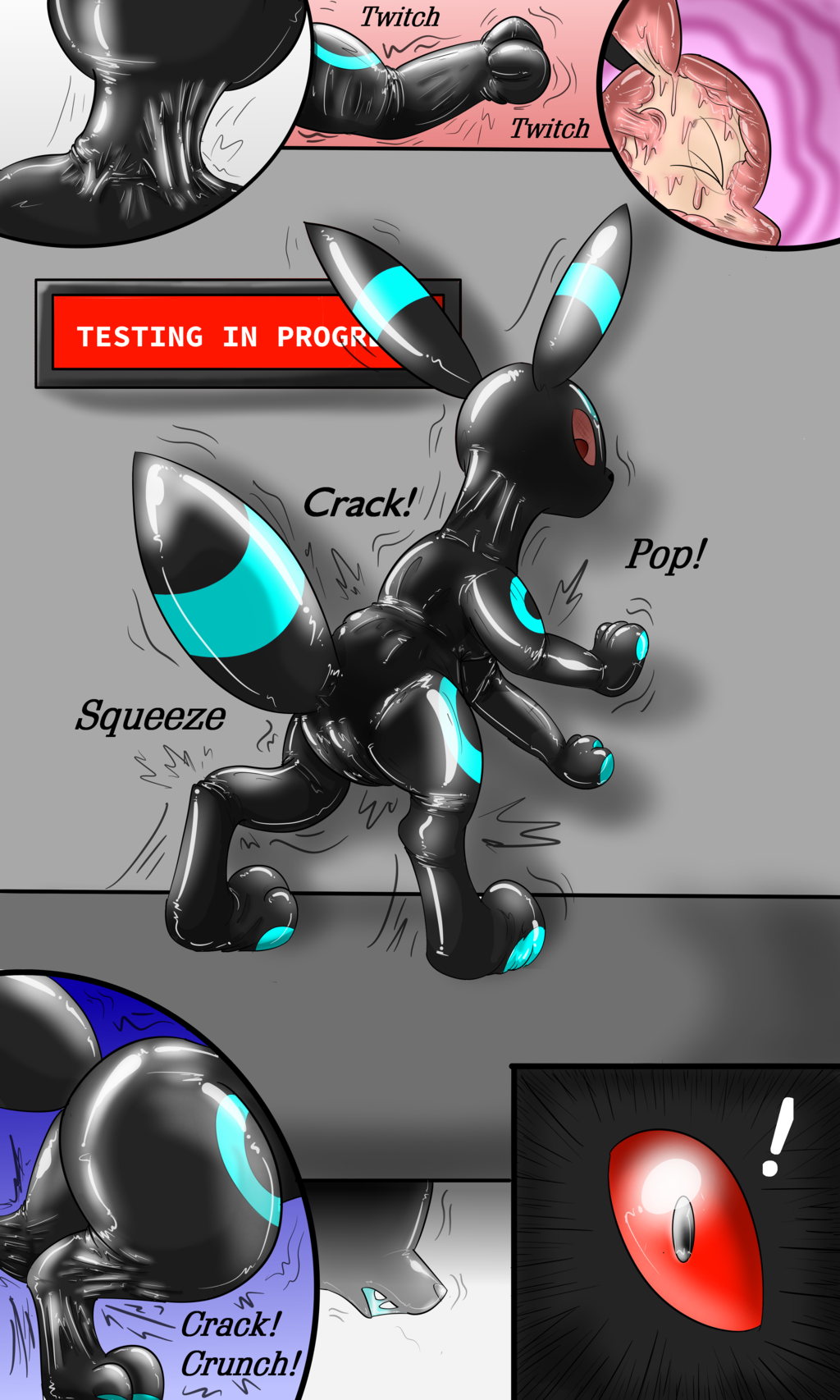 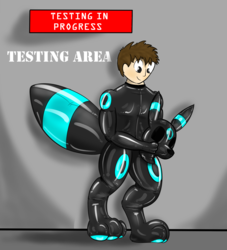 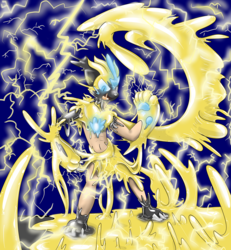 Jack stood there, feeling the soft, squishy material gently massaging his skin. It felt like a warm, snug blanket wrapped around his skin, encasing him in warm, pleasant bliss.

After several minutes, he began to wonder if it was false after all. He shouldn't have let his hopes get so high . . .

The teen let out a sad sigh. As comfortable as he was inside the plush costume, he should probably just take it off already. No point in keeping it on anyways . . . he looked ridiculous. If the other kids found out he dressed up in a giant latex umbreon suit, he would be dead socially for the rest of high school. Jack dreaded returning to that place of torture. One reason he was so obsessed with becoming an umbreon was they didn't have to worry about the terrors of school or schoolwork, and they can blast any bullies into oblivion with their amazing powers!

But that was not to be, apparently. Jack emitted another sad, longing sigh, staring down at his rubbery costumed body. Now he just felt foolish for actually getting roped into putting the clumsy thing on in the first place.

Feeling deeply disappointed, the teen reached for the mask and was going to yank it off in disgust when he noticed something odd:

He couldn't yank the mask off.

Jack tried pulling up on the muzzle, but the mask was stuck. It didn't help that his hands were uselessly balled up in the paws of his costume, absolutely useless for this procedure.

For a few moments, he began to panic, before turning to see a large, full-length mirror on his right. Trying to frantically calm himself down, he awkwardly stumbled to the mirror to take a look. This costume seemed to be somehow getting bulkier, it was getting harder to walk.

What Jack saw took his breath away.

The mask was somehow fusing with the one-piece jumpsuit that constituted the rest of the costume. The line between the two was growing thinner and thinner, slowly fading into each other with a few faint squeaking noises until they were so seamlessly fused that Jack couldn't tell where one ended and the other began. The two had become one.

Jack ran one of his hands across his neck, feeling the sleek rubber with his balled-up fingers. There was absolutely no indication at all that the two had ever been separated.

Before the teen could reflect farther, his attention was brought down to his chest: The zipper was somehow simply peeling off the costume, splitting into dozens of seperate links and clattering to the floor.

Suddenly, Jack realized that he would be trapped in the costume. Instinctively, he began to panic, frantically trying to save the remaining parts of the zipper before they joined their broken brethren on the cold concrete floor. His efforts were in vain, though, and the final parts of the zipper peeled off the costume onto the ground, revealing shiny black latex underneath. Like the mask, there was not a single trace that there had ever been a zipper there at all, only rubber.

Jack was now sealed inside the costume.

He continued panicking for a few moments before remembering that this is what he WANTED - to be permanently transformed into a pokemon!

The teenager grinned, looking at himself in the mirror proudly. He looked silly now, but that is all going to change very soon . . .

Suddenly, the entire suit constricted, molding itself around his body and tightening like a python strangling its prey. Jack let out a weak gasp as the air suddenly left him - the suit was choking him, squeezing every last drop of precious oxygen out of his lungs.

Jack blindly stumbled around, feebly grasping at his constricting costume with his handpaws in an attempt to throw it off. This of course, yielded zero success. The costume was pressing so tightly around his arms that it was beginning to block the bloodflow. He could barely feel his hands, let alone move them. The costume was too tight to allow even the slightest gesture of resistance. All Jack could do was weakly flail his arms, and focus on not falling face-first on the ground.

Suddenly, the inside of the costume suddenly felt sticky and wet, like it had instantaneously transformed into quicksand - and Jack's body was sinking right into it! Jack's entire body felt faint and distant as the sticky, gooey rubber melted onto his skin, eating away at it like some kind of toxic acid.

Yet, not a single twinge of pain flowed through Jack's nerves. Even as his legs began to crack and bend to the massive amounts of tight compressing pressure of the suit, and his chest began to deform and break from the stress, it all felt surprisingly, impossibly painless. In fact, it grew more and more pleasant with each crack and crunch of bone and tissue.

Something popped in his thighs and Jack finally tumbled downwards. With lightning speed, the costume began twisting and squeezing his back legs into a permanent quadrupedal position. Jack didn't stand a chance. The costume had bent and locked is legs into a quadrupedal stance before he could even attempt to stand.

The more the transformation progressed, the better Jack felt. A growing sense of excitement and joy began to overtake and replace the fear and anxiety he had initially felt. His entire human body now felt completely foreign, the rubber having penetrated his skin and quickly working on his inner organs and tissue.

Suddenly, Jack realized that he wasn't becoming your normal, everyday pokemon: The rubber oozing inside his body wasn't converting his organs to those of a pokemon - it was dissolving them completely, turning it into thick, liquid latex.

At first, he felt another wild rush of panic, but it once again subsided after he thought about it. This didn't seem to harm him in any way, it didn't look like it would kill him. And there are multiple advantages of being a creature made of rubber!

Jack beamed wildly as he felt the rubber shiver and squirm inside his body, gradually overtaking his own human flesh and dissolving it into more sticky, oozing rubber. He no longer needed his human body!

With a sudden start, Jack realized he was no longer breathing: His mouth and nose were sealed shut with rubber. His heart was no longer beating, in fact it was no longer there. As this fact dawned on the transforming teen, he began to grin even more: no longer did he need to rely on air or oxygen to survive! With his new, wonderful body, he could stay underwater infinitely and even survive in space! Ah, the benefits of not being a carbon-based life form!

Of course, his new rubbery body wouldn't be completely immune to the elements. After all, if he was going to be a fighter, he can't be completely invincible, could he? Then it wouldn't be fair! Still, Jack knew the new resistance capacity of his new body was far higher than he could ever possibly hope to achieve in a weak human body.

Jack's hands grew completely numb as the costume began to reshape his arms into proper forelegs; Jack watched the process with eager glee. He couldn't wait for the transformation to be finished!

An overwhelmingly pleasant sensation flooded his brain as Jack's head became fuzzy and lightheaded. Jack stumbled around, dizzy, repeatedly bumping into the walls. He couldn't think straight, the dozens of different sensations in his mind was too much for his still-human brain to handle. His vison grew dark as his eyes dissolved into the rubber, his face expanding and contracting to fit the shape of the umbreon's muzzle, like play-dough being sculpted into a mold.

Then for a moment everything went dark. All Jack could see was blackness, empty blackness. His senses were completely dead, victims of the sticky, rubbery latex. He couldn't move his body. He couldn't FEEL his body. Everything was completely numb. Did he even still have a body?

Then, as all hope seemed lost, feeling began to return to Jack's body. His brain was murky and clouded, to foggy to be of any use. Jack suddenly realized he couldn't remember anything. Nothing at all. He frantically tried to recall anything, anything lurking in his brain, but to no avail. Thinking made his already overtaxed brain throb painfully, and Jack ceased anymore attempts. It hurt too much to think.

A brush of air.

The air is cold.

something new. Something that was not there before.

Did the transformation work?

After what felt like hours, enough feeling finally returned to Jack's foot for him to move it slightly.

Slowly, gradually, like a slow, warm wave, the stiffness grew duller and dimmer, slowly fading away. Another couple of minutes passed before Jack could accurately inspect his entire body by touch. His eyes, for whatever reason, still refused to open.

Jack opened his mouth, instinctively trying to gasp, but not a single sound came out save for a single squeak. His mouth felt . . . odd. In an unnatural, inhuman position. It was too far in front of his face. What happened?

Jack's brain began to clear and his memories began to return in strides, and Jack managed to grasp enough information to recall the past 10 minutes.

Sensation returned to his eyes in a rapid flutter, and immediately Jack sprang them open, scanning the room until they fell onto the full-length mirror.

It was time to get a look at his new body.