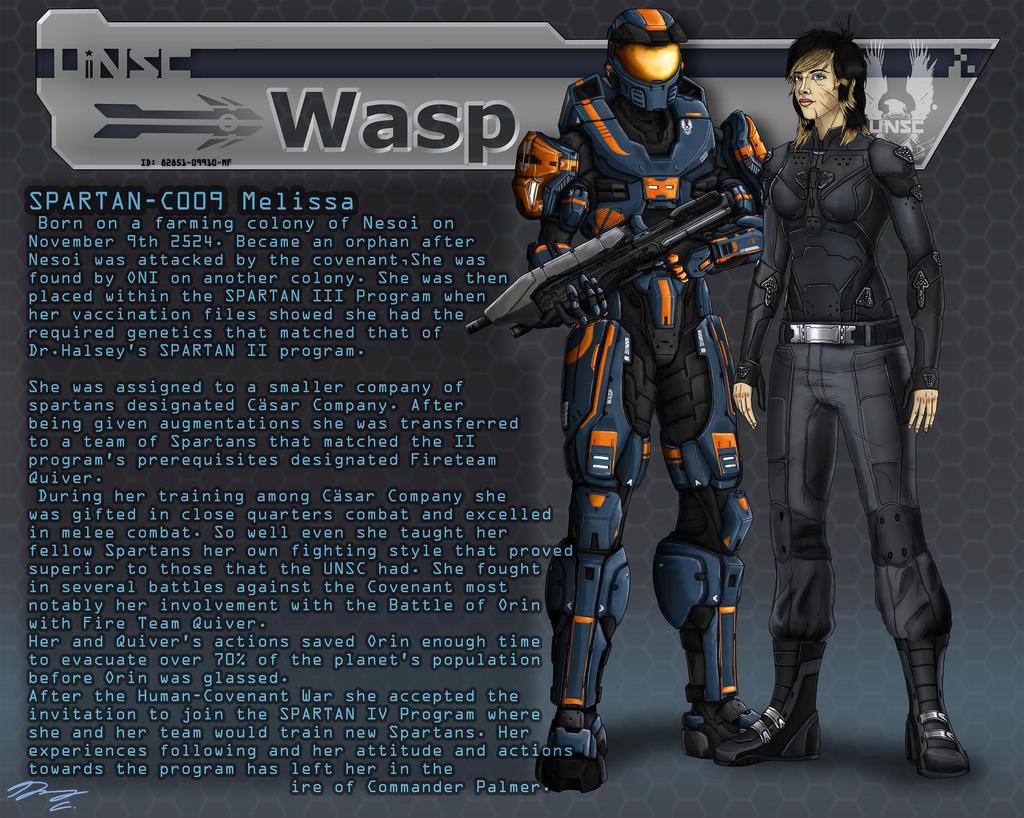 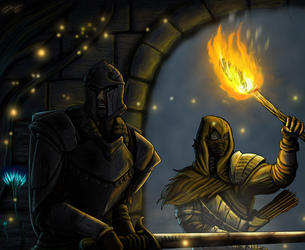 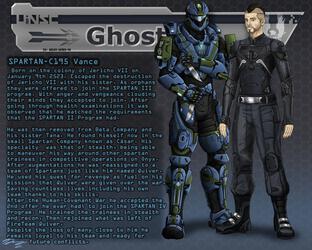 Born on a farming colony of Nesoi on November 9th, 2524. Melissa was the daughter to 2 loving but strict farming parents. Nesoi was soon attacked by 2530 and Melissa is found in the rubble of her home by a team of ODSTs doing Search and Rescue.

She was escorted on to evacuating ships that were to randomly jump out of system so that if the Covenant followed them it wouldn’t be to another colony. Several months later and Melissa is on another outer colony but is found by ONI agents who had been looking for her. She had been living alone on the streets of the city fending for herself. ONI offered a home and family in the SPARTAN III Program to her and she accepted the offer to join.

There she was enlisted into Cäsar Company, a smaller company of spartans meant to bolster the numbers of Beta Company. Her training over the next few years uncovered that she was a skilled close quarters combatant and excellent in hand to hand combat. Enough so that she began training her fellow spartans in Cäsar Company how to fight like her.

She was soon placed in for Augmentations but unknown to her knowledge, ONI had known about her nearly all her life as she had the required genetics that matched what was needed to be apart of the fabled SPARTAN II Program of Dr. Catherine Halsey. She survives her Augmentation along with the majority of Cäsar Company but with some few alterations.

She never got to fight along side Cäsar Company as soon as she stepped away from her augmentation table she was reassigned to a Special Operations Team of Spartans designated Fire Team Quiver. According to her ranking officers they were like her… Special. She didn’t like this at the start. She had gained friendships while on Onyx training with Cäsar Company. But she soon found out 2 of her fellow Spartans from Cäsar would be joining her on the fire team.

Fire Team Quiver wouldn’t be known to many in ONI or the UNSC for several years until the stories started to spread of a Team of Spartans calling themselves Quiver who’s actions saved enough time for the UNSC to evacuate nearly 70% of Orin’s population during the Battle of Orin in 2545. During this engagement with the covenant is where she received most of her facial scars and burns.

After the Human-Covenant War ended Melissa and her Team were soon assigned to missions they’d never had done before. Quell insurrection, stopping human colonies from leaving UNSC protection. Even staging Covenant attacks on colonies and coming and “saving the day” This wasn’t what Melissa accepted to do she joined the III program to strike at the Covenant not abuse her fellow people.

After bringing these issues up with the Team and then those who ordered them to do so they were soon visited by a man who had the demeanor of a Spartan who offered them a place in a new Spartan Program. She and 2 other members of Quiver accept. They are then signed on in training newly SPARTAN IV candidates into the program. Over the following years the way the candidates behaved and were allowed to be, really pissed off Melissa so much she began disciplining the candidates.

Getting word of these altercations the IV Program’s commanding officer Spartan Sarah Palmer faced Melissa personally. The 2 Spartans would have many more fights. The IV program spat in the face of what the original Spartans were all about according to Melissa she hated this, wanted to fix it with any amount of force necessary. While Palmer was the worse of them all, she was an ODST yet she took this position as a ticket to not conduct herself accordingly.

Palmer punished Melissa countless times such as pay cuts and no shore leave but none of these were really punishments, SPARTAN IIIs never were paid in the beginning and shore leave was something she didn’t really enjoy unless it was with friends. But because of this rivalry between the Commander and Melissa she would soon start punishing even fire team Quiver by putting them on missions that would get no assistance from the Infinity if things got hairy for the Team.