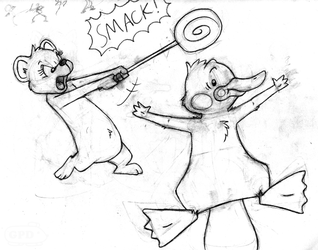 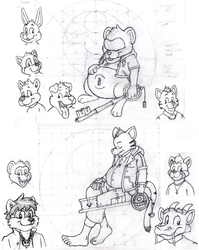 Here's even more artwork I drew in 2019 that I never got around to finishing! Into the sketches heap it goes. The idea for this drawing was to combine several of my characters into a larger image where they're looking over a cliff during sunset. The inspiration for this drawing was the back cover of the 1990 Bloom County book "Happy Trails!" which has cartoonist Berke Breathed shaking hands with the cast of his comic in the middle of a field at sunset. I really like that cover, and I wanted to do a similar looking scene... but then I never got around to doing anything with these sketches. Oh well. Maybe I'll try again some other time. If I were to do these again, I'd redraw almost everyone except for Shank (I love his angry face!), Domino and Basil. And if possible, I'd like to include even more of my cast to see how many characters I could get into one drawing.