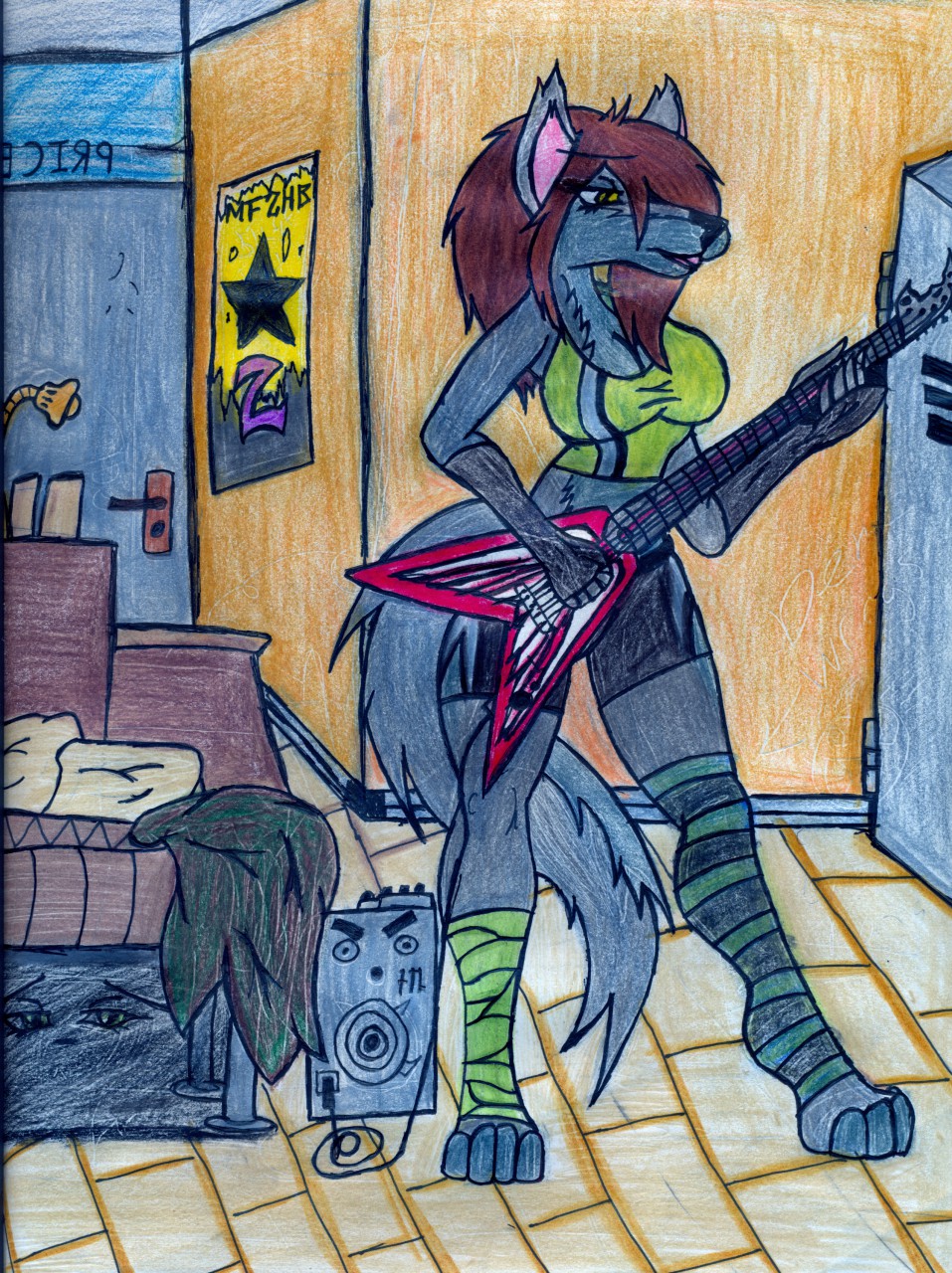 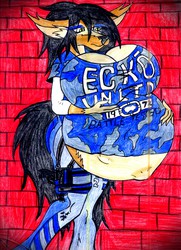 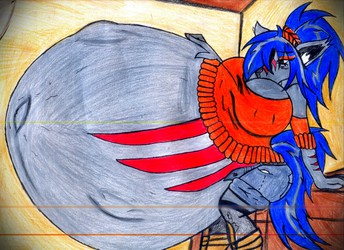 “And I say, why the hell would you prefer nine-mils if you can drop them with just one forty-five?” Carrie’s irate voice boomed through the hallway.
“You can drop them with a single niner, too. And still have a lot of ammo left to spare”, replied Lacy in a giggly tone as they both marched down the barracks. “Well, maybe you can’t…”
“Oh, hardy-friggin’-har”, retorted Carrie.
“Just admit it”, Lacy said trying to hold back her laughter at how angry Carrie was getting, “you only carry a big shotgun and a big forty-five pistol because otherwise you couldn’t hit the fat side of an elephant.”
“Screw you, Lacy”, the wolf girl snarled as she climbed the stairwell leading up to her room. “Call me when you find your brain under that mop of bimbo-blonde hair.”
Lacy exploded in hysterical laughter. She had accomplished her mission. She had riled Carrie up.

Carrie stormed into her room and slammed the metal door behind her. She took a few deep breaths and let out a surly growl. Lacy always got a kick out of pushing her buttons, but in the end Carrie knew the husky didn’t mean any harm. Carrie shook her head and began to undo her vest and harness, tossing her work clothes around the room without much care and losing her boots as she slipped into something a bit more comfortable. She gave a good stretch to her arms and back and wiggled her toes, feeling the cool floor under her paws. Carrie walked on over to her locker, removed the padlock and opened it up, revealing the small mirror hung on the door. She stared at her own face and her messy hair.
“You look like crap, Carrie”, she told herself. She picked up a small hairbrush and ran it through her hair, trying to make it look at least a bit presentable, and smiling a little as she did. Outside in the field and among the other mercs she never really took much care of her own appearance. But in here, inside her little haven, she allowed herself to drop the tough chick act and let her girly side emerge a bit.
Carrie finished up with her hair and put the comb down. She then rummaged inside the locker’s contents. Sitting beside a pile of skinny mags and a couple of tank tops was one of Carrie’s most prized possessions: an electric guitar, very expensive-looking and lovingly cared for. The wolf gal produced a tiny amplifier from within the locker, plugged it into the wall socket and placed it on a floor. Then she grabbed her guitar, hung it around her neck by the strap, and plugged it into the amp. She gave the strings a soft strum, turning the knobs on the amplifier to quiet down the sound, leaving it just loud enough so she could hear it. She didn’t want to get caught doing what she was doing, after all. She turned the keys on the guitar and picked them one by one to make sure they were in tune. She arched her legs, bent her knees a little and began strumming her guitar, gently but with incredible finesse. Low, melodic notes echoed through the small room as she played a bluesy tune, the intro building up into the first chorus. As she struck a last chord she took a breath and, with a soft, crooning voice, began to sing.

“Little girl, little girl, don’t lie to me
Tell me where did you sleep last night.
In the pines, in the pines, where the sun don’t ever shine
I would shiver the whole night through”

The wistful melody filled the room, as did the wolf’s song. Carrie felt very relaxed as the notes left her instrument through the amplifier. She let out a small sigh and closed her eyes as she strummed her guitar.

“…you have a pretty voice.”

Carrie cried a loud, surprised yelp when she heard the soft whisper coming from behind her, accidentally raking the strings with her claws and producing a nasty noise. She turned around, almost knocking down the amplifier with the cable, and looked around the room.
“W-who was-“, Carrie called out, but interrupted herself. She had recognized that meek tone behind her. “Lana…”
The shy little dingo crawled out from under Carrie’s bed. She had been hiding again, this time inside Carrie’s room of all places, and who knew how long she had been there. Lana stood there, arms behind her back, staring at her feet.
“You… sing very well.” Lana mumbled. Carrie just froze in place, her face flushed with blood. She should have been furious, she should have been enraged over the fact that the fuzzy-eared girl had managed to sneak inside her room.
But more than anything, Carrie just felt embarrassed. She was a though, confident woman, never letting anything or anyone get in her way. But if there was one thing that she kept a secret, one thing that would infallibly make her shy, it was other people listening to her singing. Carrie stammered as she tried to figure out what Lana was doing in her room.
“L-Lana, why are you… how did you… the door wasn’t even--”
Carrie interrupted her muttering when she noticed what the dingo girl was wearing.
“Is… is that my shirt!?” Carrie cried, outraged, as she recognized one of her favorite shirts covering Lana’s chest.
“Yes…” Lana answered meekly.
“Why the hell are you wearing my shirt?”
“Well… because it… it smells nice.”
Carrie was left without words, instead just growing even more flustered by the second. She honestly couldn’t tell if Lana was being honest or if she was just messing with her. But knowing her, it was probably the former.
Carrie stormed across the room, forcefully pulling the guitar’s cable with her as it flew off the amplifier. She grabbed Lana by her shoulders and pushed the little dingo out the door.
“Just… G-Get out of here”, Carrie said, her face burning up with embarrassment. “If you tell anyone you heard me singing I will… I will do… something… bad.”
“But your shirt…” Lana protested.
“Just, I dunno, keep it or whatever”, the wolf girl replied. Lana’s face lit up immediately.
“R-really!?” Lana squealed with excitement. Carrie didn’t know how much a gift meant to the shy dingo, even a simple thing like a shirt.
“Yes, really”, said Carrie as she withdrew back into her room. “Just… go already!”
“Thank y-“
Lana’s sentence was cut short by Carrie shutting the door to her room, this time making sure to lock it well. Her face still felt flushed with blood as she picked up the little amplifier and snuck it and her guitar back into the locker. She didn’t know what to make of Lana’s awkward compliments, but the best she could hope for was that she didn’t speak of Carrie’s little hobby, lest she’d lose her reputation among her peers. Carrie flopped into her bed, threw a pillow over her face and groaned with shame and despair, hoping the feeling would go away soon.

Carrie belongs to my Friend BrassLion over on FA, he also wrote the story snippet while I provided the drawing :D