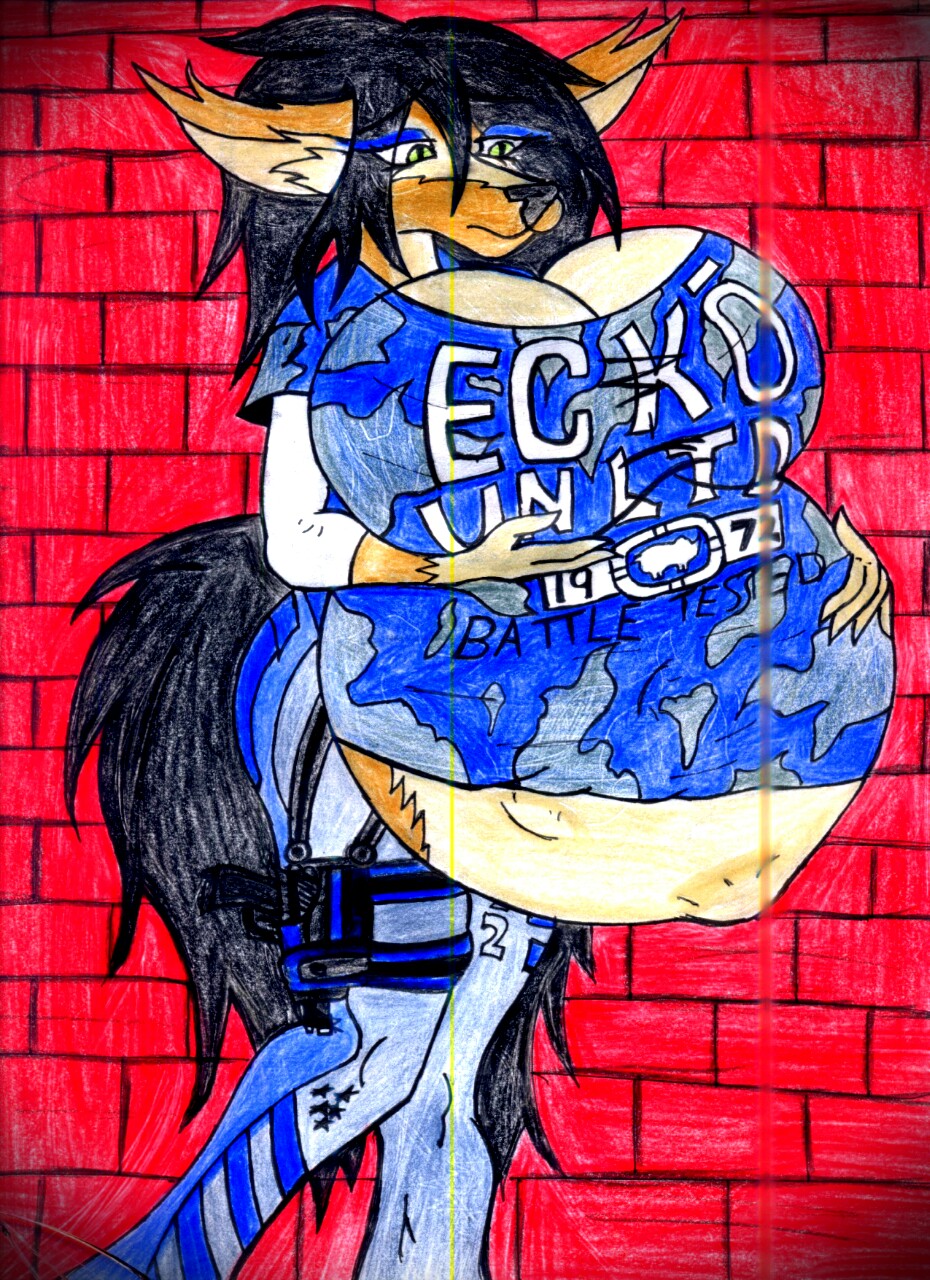 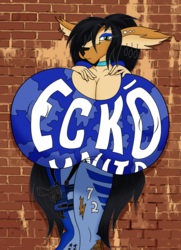 This is another illustration for Daiskida over on DA

"quick quip"
During the Story Lana goes missing and nobody knows where she went,
being shy and socially awkward, we find her later in this scenario.

"Hey, has anyone seen Lana?!" Alex yelled trough the barracks, as she waddled forward with one hand resting on her stomach.

Some of the regular grunts just shrugged, while others tried their best not to stare at her gravid form, with the wolfess making a mental note to give 'em all a beating later. But, at the moment her thoughts were finding their com specialist. The dingo has been going into hiding more and more often, at first Alex thought it was because of her shy nature, and she still wouldn't get used to the rest of the team. Course, Alex understood and was ready to give the girl her privacy, but now this was getting ridiculous. Specially when it ended up with the Dingo missing on briefings, or during important communications. Enough, was enough, so Alex was gonna get down to the bottom of this, and have a serious talk with Lana, if she ever found her.

Waddling down the stairs to the shooting gallery, Alex hoped she'd find Lana here with Carrie giving her some pointers on how to correctly use her gun, or least fire a gun without dropping it and nearly going into a panic mode. Instead, she only found Carrie, who was busy unloading a tenth pistol clip into the target. Watching the expanded clip fall to the ground, and a new slip into the pistol, Alex then let out a cough which made Carrie turn her head and raise her eyebrow.

"Wacha want blimp-o, another belly rub or something?" Carrie asked, giving a cocky grin as she then turned back to the target and took several more shots at it. Alex just rolled her eyes, followed by a soft chuckle.

"Maybe later, have you seen Lana by any chance? I need to speak to her, and I can't find that girl anywhere." The wolf girl murmured, tapping one index finger against her belly.

Looking back, Carrie raised her eyebrow, her eyes clearly showing she hasn't seen hide nor hair for their shy companion. Letting out a sigh, Alex was about to leave to continue her search, when she suddenly heard Carries voice.

"How bout ya try her room or storage hangar, we found her there last time sleeping in an old crate." Carrie said, as she continued her target practicing.

Well, it was better than nothing, thought the wolf girl as she waddled out of the basement leaving her wolf friend, alone with her toys. First, she decided to check the storage and see if Lana had taken shelter in one of supply crates. That was something Alex never understood about Lana, instead of using the bed, the dingo would always sleep in either closets, crates, hell one time even a trunk of a car. She always meant to ask her about this, but never got around to it. Upon entering the hangar, Alex began to listen to any noises to see if anyone was here, at first all was silent, but then she heard what sounded like rather cute sounding whimpers.

Smirking mentally, Alex waddled her way towards the sounds, knowing pretty well to whom they belonged. As she got closer, she heard the noise was coming from round the corner of a busted humvee.

"Oi, Lana I need to ta-" Was all Alex said as she peeked around the corner and simply froze from what she saw. She even had to shake her head several times and slap herself to make sure she wasn't just seeing things.

Before her, leaning against an ammo crate stood Lana, her usually long jet black hair looking a mess as always, her soft green eyes being both shy and in some odd way very cute and alluring. But that wasn't what had Alexe's attention, instead it was three swollen orbs that stretched out the dingos usually baggy shirt. A rather huge swollen belly, which was swollen to the point it looked like she swallowed a beachball, plus swollen breasts making it appear as if she also stuffed a pair of balloons under her shirt. An that's what Alex thought at first, until she noticed the fur pattern on the dingos, followed by bulges coming from her swollen girth pretty much shattered that theory. Swallowing hard, Lana looked at Alex, her cheeks starting to burn up brightly, while one hand cupped her breast while the other stroked her middle slowly.