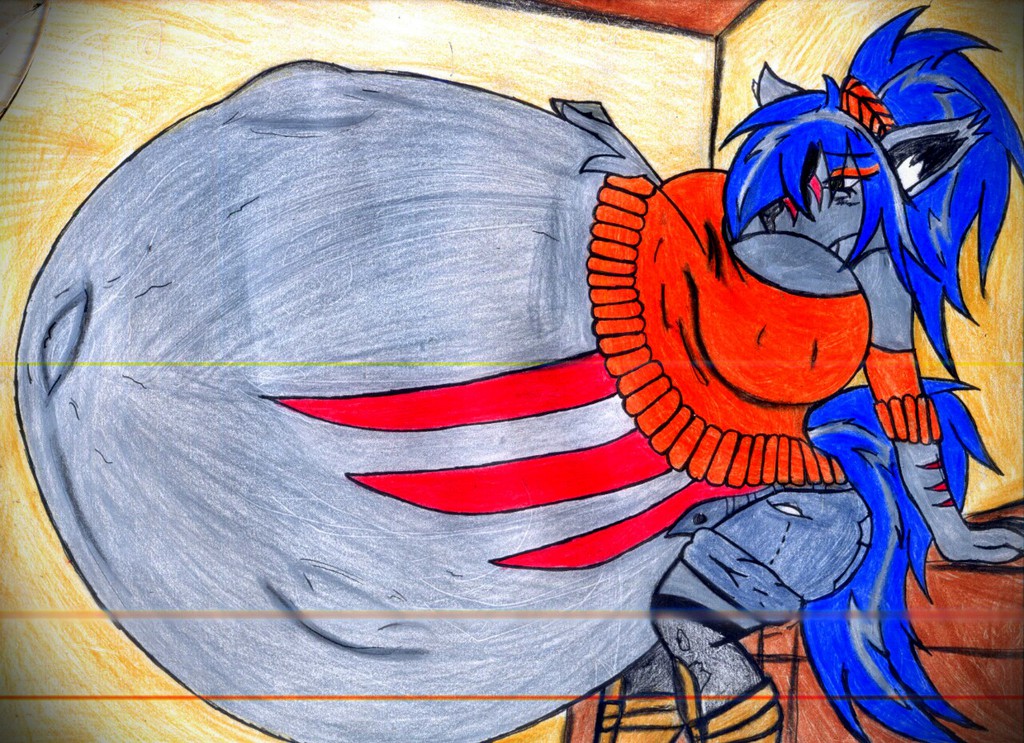 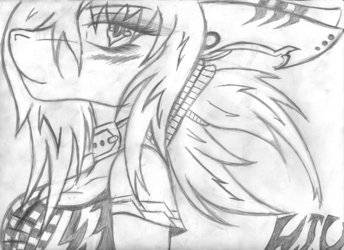 This was done for a friend of mine over on DA. finally uploaded here.
story times :P

Heavy grunts and curses were heard trough the hallways of the ION company, followed by footsteps echoing in rhythm to the grunts. A few co-workers were wondering what was going on, until the answer to their questions came into. Before them waddled a big, well one would say enormous wolf girl, wearing a pair of shorts which clearly were unbuttoned and somehow stayed on, a shirt that was rolled back and not even covering her massive belly, hell one should be amazed how said shirt fitted over her ballooned breasts, and not to mention said belly looking like it was stuffed to the brim. The staff just stopped in their tracks as they watched the poor thing lumber forward with each step she took, as rather strong kicks came from her belly, making them wonder just how much she was packing in there. Approaching a pair of large double doors, she exhaled softly and looked towards the guard waiting for him to open the door. The guard in question was a fox, looking least in his twenties, staring at the swollen female before him the poor guy tried his best not to blush and was just failing miserably at it, as his muzzle was the darkest shade of red imaginable. Then, a cough from Alex made him snap back to reality and quickly open the door for her. Sighing in frustration, the wolfess gave a nod and continued her waddle, as everyone kept staring in her general direction.

Alex exhaled once more, as she finally reached her room. Panting she looked back, still amazed she managed to make it this far and just not collapse. Turning her head back to her mighty girth, she sighed softly and then waddled inside. Due to her growth, the company was nice enough to expand her usual room to accommodate her growing size. Though, at first Alex thought they joked about her getting bigger, but seems the joke was on her in the end, frankly with how huge she has gotten, Alex began to wonder if she didn't establish some sort of record or something, 'cause at this point she wasn't even gonna be surprised. Looking towards her bed, Alex carefully took each step towards it, 'cause if she tripped or fell, she was gonna be screwed. Just then, as she was inches away from reaching her target, her brood decided to have a fighting match or something as more powerful kicks came across all over her belly and nearly making her lose balance. Yelping in surprise, Alex had to stop and quickly lean against the table as she grunted from the kicks, and her belly bouncing around as her face began to heat up. Forget battlefields and dodging bullets, her girth was a battlefield and seems there wasn't gonna be a truce anytime soon.

"K-K-Kids...C-C-Calm down...P-Please, mom is trying to g-get to bed...J-Just stop..." Alexandra whispered, as she rubbed her girth as best she could, in hopes that would calm down her kicking brood.

But it seemed they weren't gonna stop, as the kicks still continued making the poor wolfess flushed even hotter, until she heard a chuckle. Turning her head, she saw Lacy standing in the door wearing her usually T-shirt and jeanes, her hair looking a tad more messed up as she had the biggest grin on her face, as Alex knew that that grin meant.

"What's wrong, kid problems?" Lacy asked, as she swished inside the room and approached the helpless wolf girl who could only look away, while her face burned hotter.

Looking at Lacy again, Alex let out a rather cute whimper as she gave a big eyed stare, practically begging Lacy to calm down her active brood. She knew that was asking for trouble, since Lacy never did anything 'nice' specially when begging was involved. Lacy in return tapped her chin, and then murred a little as she traced her finger across Alex's belly, specially across the kicking spots which forced Alex to bite her lower lip to the point of drawing blood, just so she won't moan in the girls presence. Smirking, Lacy then leaned over and kissed Alex's belly right on her outie which made the wolfess meep and nearly jump.

"Fiiiiiine, I'll help you. But it's gonna cost you~" Lacy said, as she stared at Alex, her eyes narrowing with a predatory grin spreading across her face. Alex gulped, knowing she was making a deal the devil, but at this point she'd accept anything.

"F-F-Fine..." Alex responded huskily, as she began to feel quite hot under the collar, which made her even more nervous since now her hormones were kicking in.

Giving a nod, Lacy then moved back to Alex's belly and began move her hands across the wolf girls stretched out skin and fur, making Alex grip the table tighter followed by her panting heavily. She didn't know if Lacy knew some special way to make her feel this good, or was it because of how sensitive she has become, but just having Lacy's hands across her belly just made her simply melt from this. Exhaling softly, Alex closed her eyes feeling her brood kicking less and less, then she meeped as she felt Lacy's lips across her belly, followed a few licks which nearly made ALex jump. When her belly stopped kicking, Alex opened her eyes and sighed giving her belly a gentle pat.

"T-T-Thank you, L-Lacy. N-Now, what do you want in return?" ALex asked, preparing herself for some crazy request. Lacy just smiled in return and poked Alex's outie.

"I'll tell you later, right now how bout you get some deserved rest~" She murmured, then helped Alex waddle to bed.

Then, with some help and struggling Alex managed to slip out of her clothes, staying just in her bra and thong she carefully climbed into bed with some aid from Lacy. Getting nice and comfy, Alex stared at her belly raising like some sort of mighty blimp. Blushing, she gave a light pat, she just hoped she wasn't gonna get bigger, but with what the scientist told her, it seems she wasn't gonna get off easy. Sighing, she was about to turn her head and thank Lacy, but in response just got a smooch on the lips. Blinking, Alex just stared at Lacy who didn't say anything and just made her way towards the door. Stopping, she then looked back and then said.

"I'll take my reward laters~" SHe said, and then closed the door after herself.

Smiling softly, Alex placed her hand on her belly as much she could reach and then closed her eyes, slowly drifting off to sleep. Being thankful for having such friends