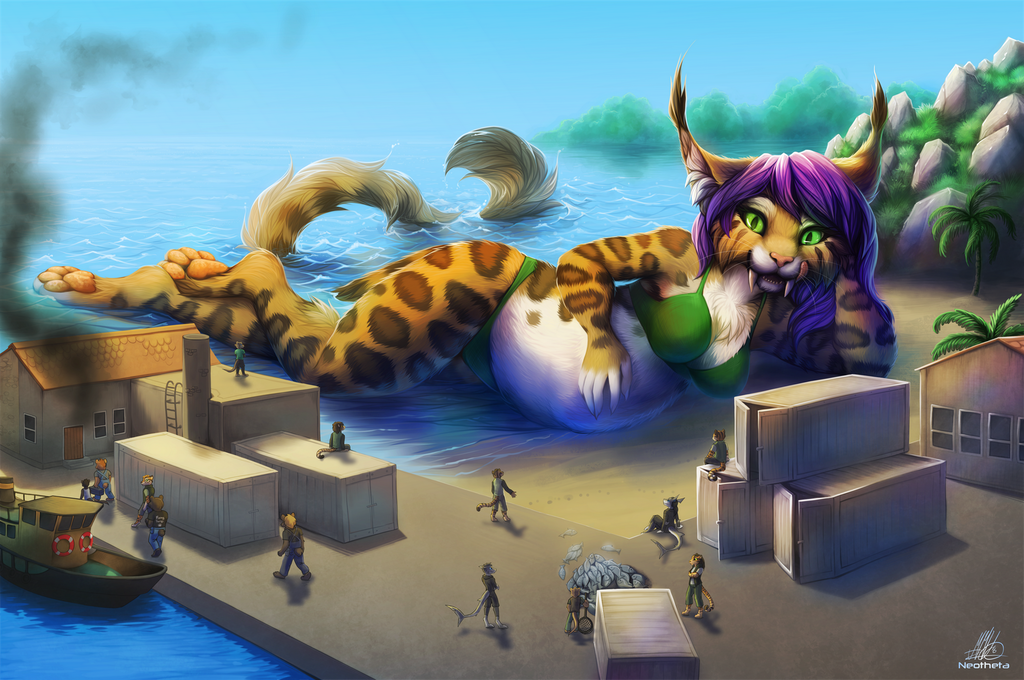 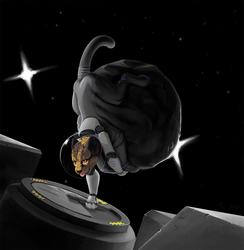 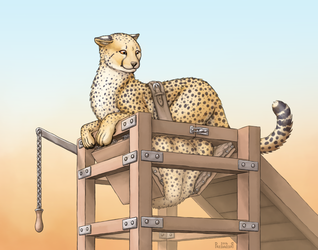 The smell of fresh fish and salty water hangs over the small harbour like it always does, not even the searing rays of the bright noon sun can make it disperse – but this time there's a distinct scent of wet feline fur mixed in with the familiar smells, something beyond what the anthro fishing cats who labour at the docks, cause.
”Are you sure you're full, Feligris? Some more and you'd be done clearing out all the freezer containers.”, the harbour master asks the huge macro feline whose body fills most of the shallow bay in front of the harbour's beach, receiving a lazy ear flick in response from the feline whose gleaming green eyes are fixated on the remaining pile of fish on the dock.

”Preeetty full already, but I'm waiting to see if I'd have some more room… I said I'd help you to make all the fish disappear before they all rot and I'd like to keep that promise!” is Feligris' eager answer to the question while she licks her chops contently and gingerly rubs her furry belly which has distended quite prominently from the contents of the now empty containers – her every movement sending waves to crash into the docks and the beach as she seeks for a comfortable way to rest her belly in the bay. Spotting a few tiny furs fleeing the waves, she chuckles and affords a huge sabretoothed grin at the harbour master - ”I have my limits even if I may seem bottomless! But I'm glad to help, how are the repairs coming?”

”A day or two and they're done, I was told, but in this heat fish doesn't stay good for more than a few hours even in ice… I've told them that the electric board is undersized but no-one listens to me here! Thankfully we found you, hauling all this away in dump trucks would've been awful on top of losing it!”, the harbour master gripes with a frown on his muzzle as he makes a random arm motion over the harbour area where many sharks and fishing cats mill about washing fish boxes and cleaning the open containers.

Feligris lolls her tongue facetiously at the comment and stretches out further in the bay after carefully checking her surroundings for any boats or people, her long soaked tail splashing water around as it stirs the deeper parts of the harbour. ”Mrrrr… and I hadn't eaten yet so I had plenty of reason to come here~ I hope you aren't too terrified of us macros as I don't think I can really move for a couple of days after I've polished off what you still have left, my stomach's so heavy so I just want to rest and digest...”, she murmurs while enjoying sunshine and the gentle waves which wash against her huge frame, soothing her uncomfortably swollen belly.

”Hah! Naah, this ain't a tourist beach and we aren't unfamiliar wth you, your kind is just a rare sight here but you're going to have to deal with school kids gawking at you really soon – you sure you aren't afraid?”, the harbour master laughs heartily and winks at Feligris who snorts loudly enough for everyone in the harbour pause in surprise for a moment. ”They've already been asking if they can climb on you since nobody normally sees macros anywhere else but TV and photos.”

The unexpected request prompts Feligris to rub her own chin with her tongue peeking out contemplatively, her tail twisting in the water anxiously enough to send tall waves towards the docks. ”Nya, I dunnoooo…”, she begins to say but trails off after feeling the sting of dozens of eyes aimed at her – prompting her to quickly revise what she was about to say as her free hand digs and spreads wet sand around. ”… I gueeeess it's alright, just please tell them to behave! Embarrassing to fish people out of a bikini top...”, she muses and affords a flustered toothy grin to the small furs around her, eliciting amused chuckles and grins as everyone continues working. Still nervous about the idea but content to lie in the warm water under the pleasant sun, Feligris's ears gradually perk up as she pats her churning belly and yawns deeply with her tongue curling out.

”Splendid! I'll call them and you can have fun together for the whole evening – now, how about the last fish…?”, the harbour master beams and motions towards the pile which is already being hastily loaded into the front bucket of a tractor.

Shrugging, Feligris lowers her head and cranes her neck to drop her lower jaw right on the beach above the waterline – opening her cavernous maw wide. ”Mrrgh, bring it on, I said I'd help you with all of it and I think there's a bit more space in my belly now~”, she tells the workers who immediately hose the fish down to get rid of any dirt before driving the tractor down over to her and emptying the bucket into her waiting maw… letting her pluck out any remaining fish as she unhurriedly swallows. Her stomach protests the extra strain with aches which even the soothing waves can't completely abate, but once she has wolfed everything down the extreme stuffed sensation and the weight of her stomach become relatively comfortable as long as she doesn't move – hence she simply settles down to digest and wait to get to mingle with the local school kinds while the harbour master heads to his office and the others continue cleaning the docks without paying a great deal of attention to the macro feline filling the harbour...