When you're too eager to oblige - art by Axi by Feligris 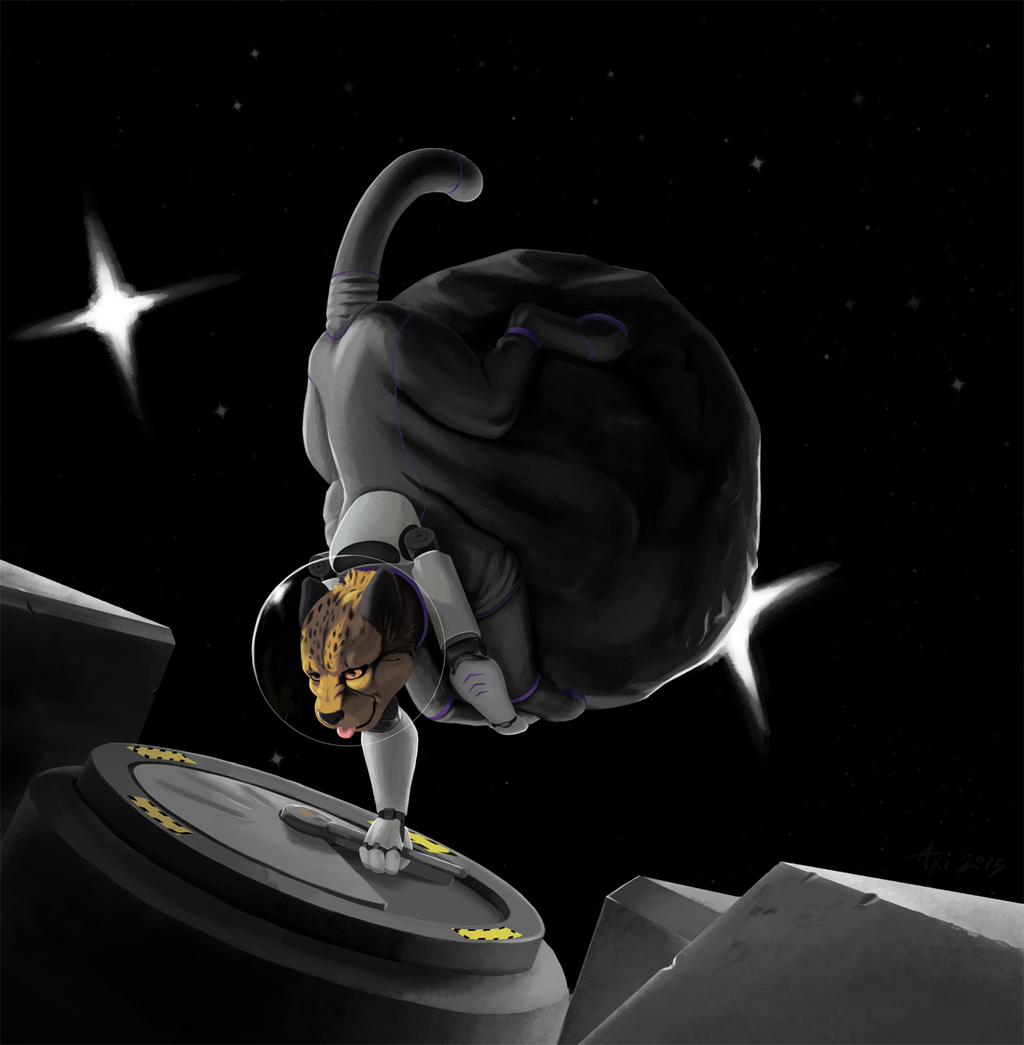 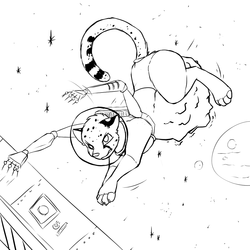 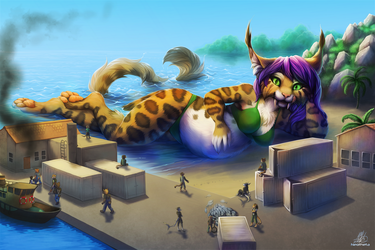 When you're too eager to oblige - art by Axi

Locating the long-abandoned and derelict space liner had been the hard part – months of hopping from place to place with Trey doing random odd jobs suited for a feral cheetah while Mish had pored through reams of fragmented Conglomerate records in search for clues for anything they could salvage – but once she had managed to combine certain pieces into a reasonably accurate mention of where a small fleet of requisitioned civilian ships had been left in orbit ”until further need”, they had been off in a hurry. Mish had even forfeited an opportunity to search whether someone had been to the area already, to avoid cluing anyone into their plans, seeing how her efforts had already gathered undue interest amid the competing scavengers… for the same reason she had chosen a long circuitous path of FTL jumps to gauge if anyone was following their shuttle.
Further delays had resulted from how the records were damaged enough not to give a clear indication as to which planet in the system had been used as the storage area, or if the ships had actually been left in a cluster to orbit the star instead, the confusion having lead to another two weeks of searching until Trey had finally spotted something in the orbit of the innermost planet when performing a visual scan. Which had turned out to be a large spaceliner in the middle of a number of smaller craft… originally there had been more ships according to Mish's reconstruction of the records, but after a closer look the duo can only hypothetize that the rest must have been knocked out of orbit to crash into the planet during the great many years after the Conglomerate's apocalyptic collapse, although their shuttle's scanners are much too outdated and imprecise to check for any wreckage planetside.

Although long space-suited excursions were always exhausting, Trey had been eager to allow Mish to prepare him while she would remain on the shuttle to monitor operations and prevent any mishaps – she had been doting on him and his belly so much during the long flight and long search that he had welcomed the opportunity to escape the ship's sole living quarters to go scavenging instead. Even if the preparations had inevitably involved him drinking a special yoghurt meant to both fight nausea and to calm his stomach lining by coating it, something which makes him instantly anxious, seeing how it reminds him of how exactly he's meant to bring the loot haul back to the shuttle. Suiting up had been easy, ditto for leaving through the airlock to zip over to the derelict space liner as their shuttle maintains a steady orbit nearby – gaining entrance had been slight more difficult but cutting cargo hatches open was not a problem for Trey anymore.
There had been no remaining atmosphere on the ship, as expected, and no functional power sources either… so Trey had relied entirely on his suit's own lighting and the use of his mechanical arms to pry open inner doors while Mish had constantly monitored his progress through video, giving guidance and superimposing outlines of important ship parts on his HUD to compel him to remember them for later.
In total there had not been an enormous amount of parts or tools immediately worthy of scavenging especially because it was often better to bring in smaller haul at first for it to be easier and more lucrative to sell in its entirety – nevertheless, after hours of dismantling various mechanisms inside the hulk and gathering everything to one location, Trey whined as he cringed at the amount of everything he was meant to haul back to the ship. But, as usual, he had obliged Mish's instructions after some gentle coaxing and erected a lightweight airtight spherical tent around the collection which floated inside the cargo bay – to be able to temporarily remove his helmet and start reluctantly gorging on the junk which surrounded him. Over the next few hours he had distracted himself from the discomfort of swallowing oddly shaped hard objects by doing idle banter with Mish, during which she had talked him into bringing everything over in one load despite how he had grovelled and complained due to the increasing distention of his belly under the stretchy spacesuit.

Hours later, he finds himself with an unexpected problem after having carefully navigated back to the shuttle's airlock – forced to be constantly aware of the debilitating mass of the spare parts and tools inside his enormously bloated stomach as the inadequate thrusters on his propulsion unit make maneuvering ponderous. Keeping his actual legs tightly wrapped around his massive girth to help with the constant aching, he hesitates as he's about to turn the handle. ”Mish… Mish! I don't think I can fit through, my belly is -”, he mreows into the communicator after grabbing the handle of the outer airlock door, receiving a brief chirp in response before Mish actually starts to talk. ”Which is why I told you to go to the cargo door instead, you big silly – I'll be waiting for you there. And you said you didn't want to unload multiple times!”, she replies softly while Trey catches a glimpse of the cargo door mechanisms shifting at the rear of the shuttle.
”But – but – I don't want, it's cold and – I guess I have no choice?”, he balks at the idea, his ears wilting under the clear helmet when he realizes that he indeed is never going to make it through the regular airlock. Moments later he's half-flying and half-dragging himself along the shuttle's outer hull towards the gradually opening cargo hatch – grimacing from how every part of his delicate straining stomach lining is seemingly prodded by angular corners and protrusions every time he adjusts his course, his own paws only able to provide limited comfort. The metallic surface of the extended container loader hardly seems inviting but he diligently maneuvers over to it nevertheless, gingerly lowering his belly onto it while extending his mechanical arms to grab the container hooks. ”I'm ready… please, lets take some time off after this…!”, he pleads and gasps when the loader jolts on the move, patting his belly as he hopes Mish doesn't plan on waiting for days before unloading his poor stomach...