Ghost (by Bonk) by etheras 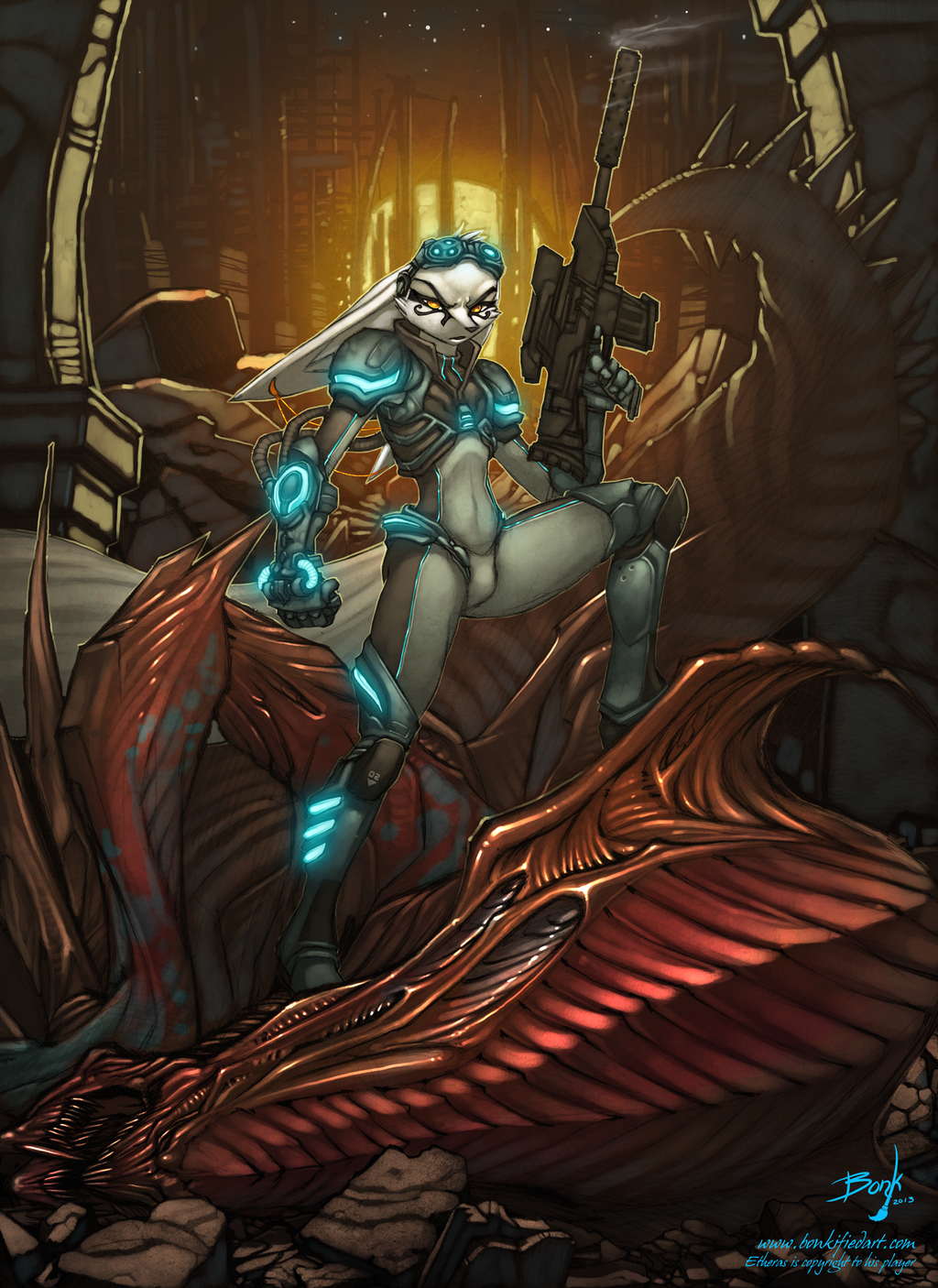 The tunnel was like the gullet of some monstrous beast, ribbed ridges along the top and sides as if were hollowed out by some kind of massive screw being turned into the planet's crust, dirt rich in iron red like blood along the walls, and it just went deeper and deeper. Etheras held his BOSUN rifle at the ready, watching the Zerg slide-by unable to notice him enveloped in the psionic field projected by his powerful trained mind. Coupled with the newest version of the Empire's most advanced stealth suit... which was pleasingly fashionable and flattering tight, he thought... there was nothing that could find him down here... deep within the belly of the beast. It was too confined for the massive bloated living balloons that the terrans has christened "Overlords", and there were no structures this deep below the surface... and nothing else in the Zerg arsenal had proven effective against the Terran stealth technology.

The beasts were unwary this far behind their defenses. Here in the primary hive, their power was supreme... or so they believed. But their formidable defences were inadequate against the ingenuity of the Terrans of Earth. The fennec had been dropped behind the lines in one of three dropships. It had seemed like an insurmountable problem... how to get the Ghost past the sea of spore colonies. As Terrans, their primary advantage was range: They could deliver much more firepower downrange than either the Zerg with their vast numbers, or the Protoss with their thick armor and powerful spellcasters. This made the Terran tactics favor a more defensive posture. But assaulting the primary hive meant attacking deep in unsupported territory. It was a mission for a ghost and the fennec was among the best of them.

The Terrans had one advantage that their foes could not counter: they could “float” buildings. Few considered that this could be used as a powerful weapon. While slow and ponderous, and with no offensive capabilities, buildings could see further and take more damage than almost anything else in the Terran arsenal... and so they used them.

Floating an Engineering Bay above the Spore Colonies, the spore colonies targeted the massive hulk floating above them, and blasted it with volleys of noxious biological projectiles... but they could only target one thing at a time. So while the spores raked and pitted the thick armor of the building, the dropships zoomed in below. A few of the spore colonies shifted focus to the faster smaller ships, but even though all three were damaged, they delivered their cargo to the far side of the Zerg defenses.

Etheras was the only Ghost among the delivery. The rest were mercenaries, who set to attacking the zerg economy. Blasting at the drones as they harvested minerals, they were intended to smokescreen the stealthy fennec’s arrival - the real objective of this daring gamble. By attacking the Zerg harvesters, they would put a serious dent in the enemy’s ability to react to other attacks, and it might be by the Zerg minds that this was the purpose of the attack... and not that a deeper purpose was hidden within. The mercenaries would be killed and the Zerg would go back to building their economy, not knowing that they had been infiltrated.

Etheras approached the horrible monstrosity. It pulsed and shuddered with a twisted kind of life, glistening with some kind of sputum. It was so disgusting that the beautiful Etheras simply could not let it exist in the same universe as himself. He was so transfixed with its grossness that he did not notice the snake-like tail of a hydralisk guard to his right. Etheras stepped on it, and the creature wheeled around with surprise. The shock interrupted the fennec’s concentration, momentarily allowing the horrible creature to perceive him. But Etheras didn’t hesitate. He blasted it in the face once.. twice.. three times, its facial carapace shattering, teeth and mandibles spraying everywhere, gouts of green blood bathing down its back as it slumped before Etheras. Eth jumped up on the carcass of the hydralisk and got one last look at the Xel’Naga corruption (and posing dramatically) before lowering his gun at it and pressing the button for the laser target designator. The thing recoiled. “Oh don’t be like that, gurlfriend. I’m just here to give you a makeover. It won’t hurt a bit.”

“Nuclear Launch Detected” said the voice of the Adjutant in Etheras’s headset. He grinned malevolently.

Artwork by: the amazing and talented

Repost Authorization Rating: LIMITED (furry sites ONLY)
Dunno what that means? Be sure to read this:
http://www.sofurry.com/view/365517
... before reposting.