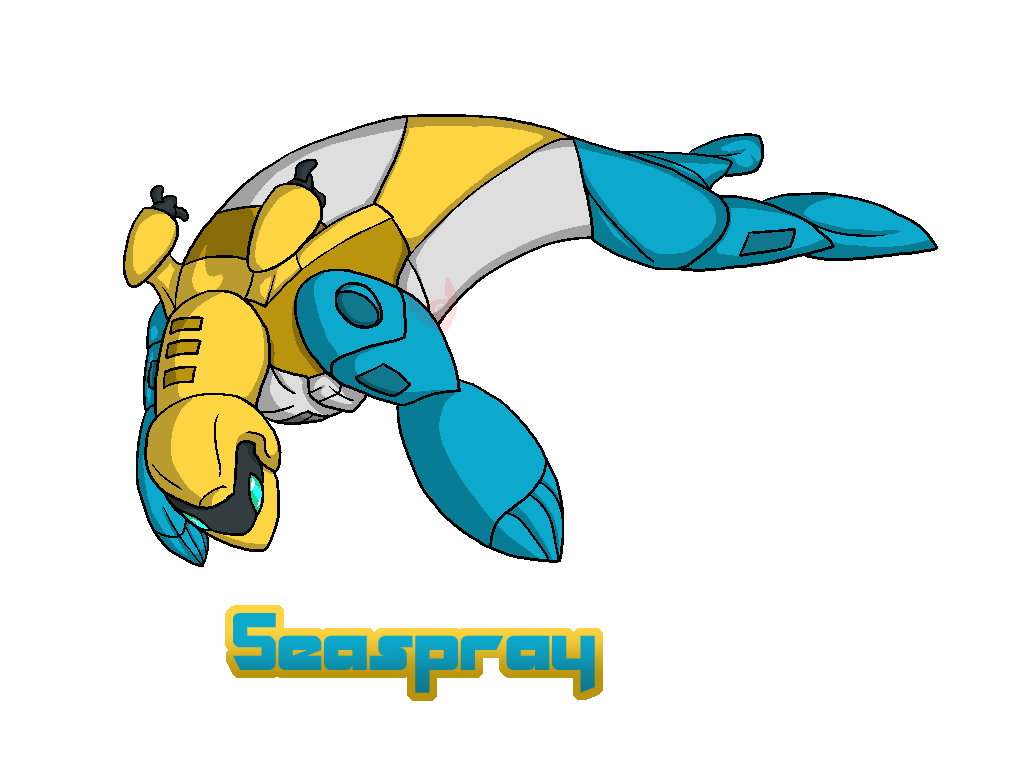 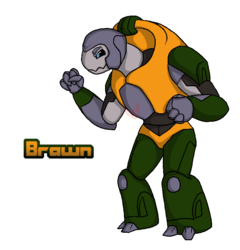 • Seaspray is a bot who spends either all his time in the water or gazing longingly AT water.
• One could assume it’s because he is very clumsy, slow and awkward on land and that’s not entirely incorrect, because he is all those things. In fact, he’s rather amusing to watch on land but that’s just mean, he can’t help it.
• He gazes longingly at the Oceans as he feels like he’s connected to his lost Trine that way.
• Seaspray used to be part of a trine called the “Sea Seekers”.
• Depth Charge died during the war, a noble sacrifice to take out the monstrous Rampage, a sacrifice that often gets his name sung out with praise but it just makes Seaspray feel bad.
• He feels that Depth Charge only did it because he was too slow to escape Rampage, sure he knew Depth Charge had a deep vendetta against Rampage and would’ve done literally anything to destroy the monster but deep down he feels like Depth Charge only really rushed in without a full plan to protect him.
• The other member of his trine? Well, they joined the Decepticons, for a while Coldseep remained in contact with Seaspray and Depth Charge, he hoped he could get his submarine friend to change his mind, sometimes • Seaspray thought he was successful but then they vanished without a trace.
• As far as he knows, he’s the last of the Sea Seekers left.
• At least swimming in the Ocean lets him feel close to them.
• He tends to keep this to when he’s alone, however, as otherwise, he’s a chirpy and quite bubbly individual.
• Has a bad habit of applauding things that don’t always need applauding.
• Probably knows more about Earth's Ocean at this point than what humans know.
• He seems to have an immunity to Ravage who is always reluctant to attack him. Neither knows why.
• This has lead to the odd, tense-but-relaxed few times where he lets Ravage sit with him and watch the Ocean waves.
• He’s been jokingly referred to as a ‘living dowsing rod’ a few times because if you put him anywhere on any planet he’s probably going to go all of five minutes before making a beeline to the nearest body of water.
• He’s working on a method of sliding along the ground to improve land-based mobility.
• He’s not above using his size and status as a big-alien-robot to deliberately scare humans if he sees them littering in the waters.
• He thinks he’s been adopted by a pod of Killer Whales, there’s a particular group that stick to his side whenever they’re near.
• Cyclonus bit a chunk out of him during the Unicron wars (Think Great White Shark getting a seal) but he lived and it got repaired, can’t tell he was ever injured now.
• Excellent at nautical fighting