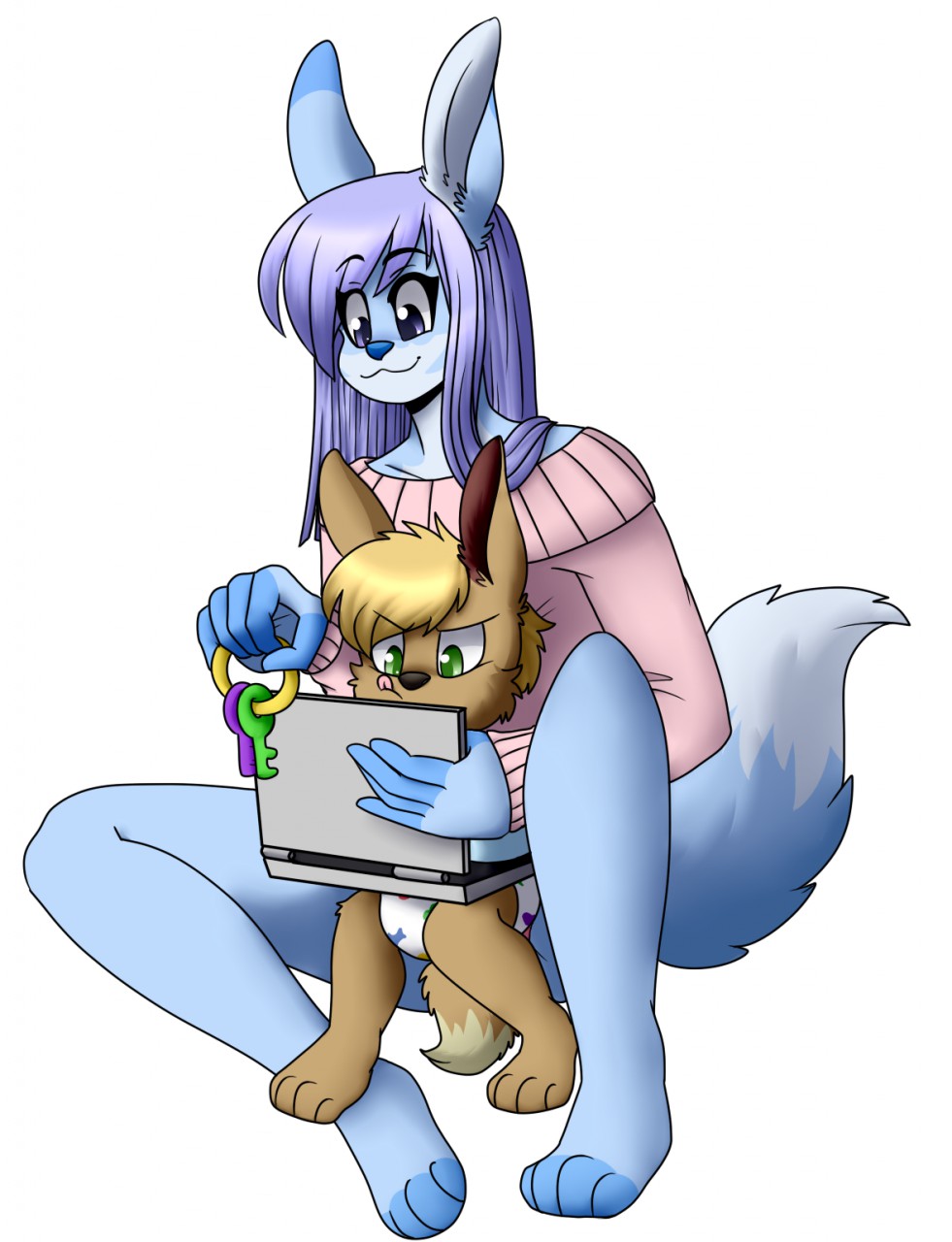 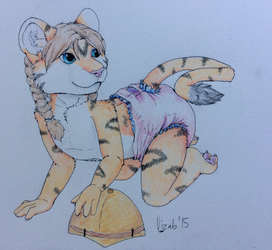 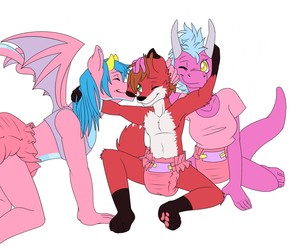 This is a commission by Diapered-buns of the little genius Eevee Wally and his caretaker Solstice.

It took Wally a lot of time to talk some sense into his 'trainer' Solstice to finally let him finish his two PhDs instead of sticking him in preschool (which one incident where he built a laser to melt all the teething rings they kept giving him...and set the caretaker's skirt on fire). He was making great progress towards his doctorates...though he had to make sure Solstice making progress in trying to baby him all the time. :P

"Wally dear, let's check those pull-ups," Solstice cooed in a sing-song voice as he was digging out for a couple of books that weighed more than he did, "Don't want you leaking while you're typing."

"Sol!" Wally whined, "I'm dry!" Despite his protest, it didn't stop her from taking a check.

"Spoken like a true baby," Solstice teased as she picked him up and laid him out on his changing table, "Looks like your wish to be in diapers is coming true...you're actually quite soggy mister." Wally whined as she jingled the teething keys over him as she gingerly changed his training pants. He just couldn't stand her using them, even if he was swatting at it while she changed him.

"Are you gonna let me work now, Sol?" Wally fussed as she picked him up.

"I got your laptop ready, pumpkin," Solstice smiled as she carried him and his books over to the living room. Wally blushed as he reached up and smooched her on the lips which really made Solstice blush. While she was his caretaker and trainer...the two have a awkward relationship beyond that because they both liked a lot of things together and Solstice had no problem sharing her bed with him; he may be as tiny as a preschooler but he was indeed and adult. The kiss was kind of a way to remind Solstice that he was grown-up...but also the fact he did care for her too.

"No baby business, okay Sol?" Wally asked as she sat him in his lap and brought his laptop over so he could start typing away. He was churning away in theorems, theories and probabilities making his dissertation, hardly distracted by his surroundings. While all the academics was child's play to him...the real challenge was not go get distracted by Solstice jingling those teething keys, quickly reminding him that he was her 'baby' and no matter what he was distracted by them.

"Sol!" Wally grumped, "jingling those blasted keys to coerce me to take one isn't going to work. Besides, your little Eevee is in the zone right now. Bad enough I'm too short to drive..."

"You've been at this for three hours straight," Sol teased, "Even if you're churning out work, it's not good for your eyes and body not to take a break and play." Wally huffed at her as he kept working, the two kept fussing and whining until another two hours later where he finally needed another change before Sol could get her little Eevee away from his work.

"Cheater," Wally mumbled, "using my bodily functions against me to win."

"For a few well-placed tickles," Solstice smirked, "You were already wet anyway. C'mon lil'guy you need new pants." Wally huffed again as Sol finally managed to drag him away for another changed.