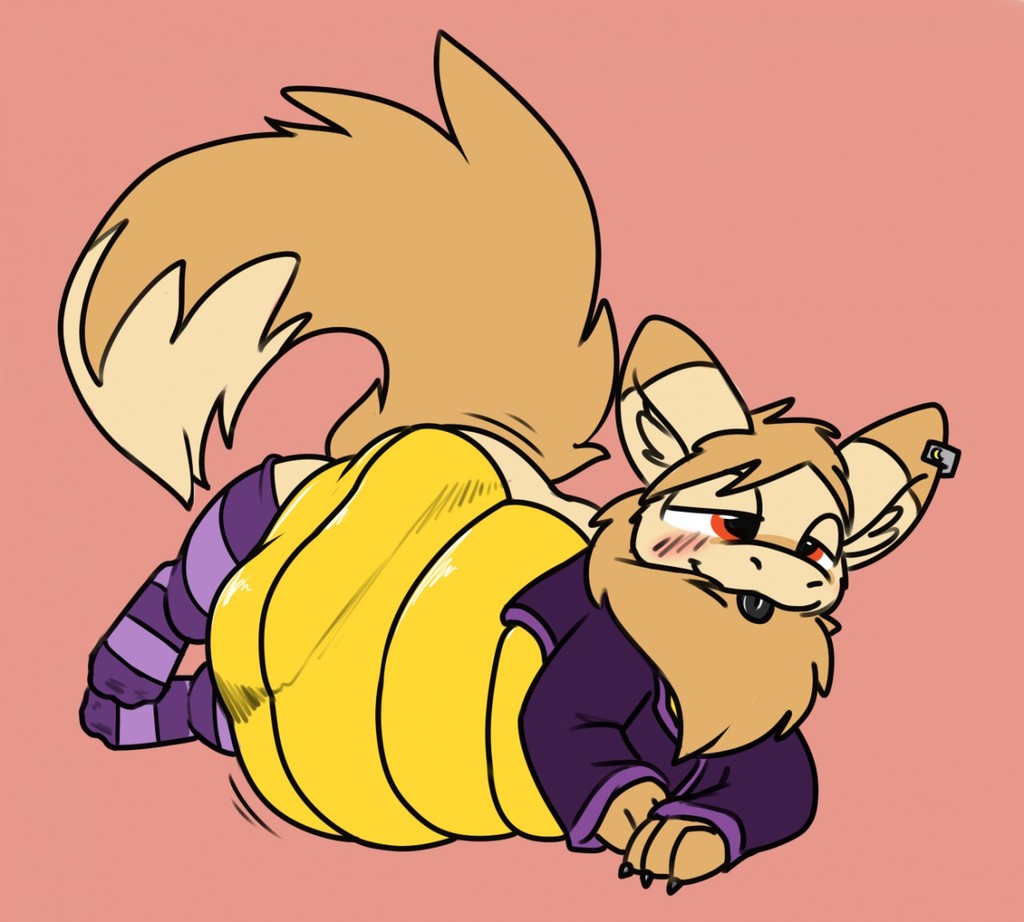 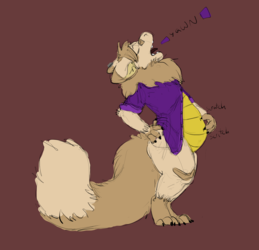 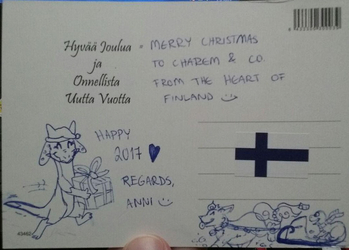 (The following is a snippet from Chapter 4 of [url=https://www.sofurry.com/browse/folder/stories?by=32663&folder=42804]The 'Unwanted' Adventures of Biscuit the Srothar[/url] - do consider reading the whole thing over there!)

Though Griffy was picky with his choices, he didn't bug his shopping companion too much for opinions; he had quite in mind what he wanted, it was just a matter of selecting the exact colors and materials. It was only at the end of their shopping adventure, browsing through a footwear aisle, that the otter spoke up towards Biscuit again.

"Hm! What do you think of these?" the otter pointed to a particular section featuring silk stockings in multiple sizes, designed to fit to the feet and lower legs.

"Uh...I guess they're good for people who have cold feet?" shrugged the Srothar.

Griffy sighed with a tsk. "Clothes are more than just for utility purposes, Biscuit. They exist to accessorize, to make one look sexy, or alluring, or...cute~"

"That's fine for people interested in those things. I mean...like yourself. I'm sure you'd know how that all works better than me." Biscuit reasoned somewhat awkwardly, not sure what else to say aside from that.

"Oh, you goof. Listen...let's just say you did care about those things. Or...you just really needed to get your feet warm. Now if you did...what color out of these would you most like to pick out?" the otter asked, hands to his hips as he waited for an answer.

The Srothar scanned the shelves, biting his lip. To be fair, he liked a lot of colors, but...purple, he guessed? He liked that color most on his shirts, at least. "I guess that looks nice." the feline motioned towards a particular set of four stockings covered in a pastel purple shade.

"Is that right? Hee, they are rather cute~" the mustelid snatched them up in an instant and put them into his basket. "Thanks, Biscuit...I think I'm ready to check out now."

The registers were rather clear, and the two creatures processed their purchases quite quickly. Biscuit was simply happy to run into a 'Buy 5, Get 5 Half Off' deal on shirts, which allowed him to cheaply collect a new stock of clothes to fit his weight-gained form. The otter seemed less focused on deals, but seemed to have picked out all exactly what he wanted - and indeed, left with a whole two more bags of clothes than his feline companion. The sun had fully set by the time the duo left the clothes outlet...a far longer amount of time had been spent there than Biscuit had intended, but in a way it had been fun...or amusing, at least...to hang out with his quirky boss.

Griffy had no trouble driving the feline back to his apartment; it wasn't all that far out of the way for him. The Srothar was thankful for his boss's extra effort...he was pretty beat after such a long day, and carrying bags of clothes the whole way home would've been a tad annoying. The otter was happy to help, and soon the feline slipped out of the car next to his front door, the mustelid helping get his bags from the trunk.

"Thanks, Griff. Though I could've done without knowing some of the things you buy, this was a surprisingly-fun trip." Biscuit smirked, taking the bags as Griffy's webbed hands passed them to him. "I guess I'll see you at work tomorrow."

"Oh...hold on hon. You forgot something." the otter fished around inside one of his bags, before pulling out those purple stockings the Srothar had picked out earlier.

"Uh...you got those, not me, remember?" Biscuit raised an eyebrow, awkwardly taking the package when he realize the mustelid would keep holding them out to him until he did.

"Yes, that's right. I got them, for you! Consider it a gift, sweetie. They're just the right size for you, and I think you'll wear them well." the otter leaned a foot forward, his little webbed toes pat-patting atop the feline's larger foot-digits. "I suspect they'll accessorize well with that shiny new piercing of yours too~"

Wriggling his tail a little at the feeling of the mustelid's fuzzy sole atop his foot, and flicking his ear shyly as he was reminded of that ring, the Srothar nonetheless let out a tense sigh. "I made you promise not to buy me something 'cute'...and I said I wasn't interested in these kind of things..."

Griffy just smiled, almost knowingly, and raised a hand again to the Srothar's belly for a little rub...relaxing his feline friend as he knew the motion would. "First, you made me promise I wouldn't make you buy something cute. I bought that, so it doesn't apply to your promise." The otter chuckled and pushed into the scaled pudge idly. "Second, hon...how do you know you're interested in something or not if you've never tried it before?"

Biscuit groaned lightly at the rubs he once more received, shivering as the otter's hand buried into his soft belly. "I...suppose...you might have a point..." he waffled. "But why does it make any difference to you?..."

With that question, the mustelid stepped back, crossing his arms and leaning back against his car, thinking for a moment. The feline blinked in surprise to see his always-bubbly boss grow calm and introspective for a moment, then watched a soft smile spread to his otter's face.

"You've been one of my best employees for the year I've known you, Biscuit. But I've always seen how stubborn you are at branching out, at trying new things." Griffy spoke, honest as could be. "Now, that isn't my business to get into as your boss... But as your friend, well...perhaps it worries me, sometimes." Pausing, the otter cleared his throat, his tail swishing behind with with a little more energy. "But your weight gain, your response to a simple rub, that pretty little earring...I don't know what's changed in you lately, but it seems to be a change for the better...and that's something I'd like to encourage. And sure, maybe these stockings aren't really that important in the grand scheme of things, but...heck, hon. If I knew you'll try them out on those fluffy feet of yours, sometime or another, it would just make my day. And not simply because I know you'd be the most precious thing ever with them on~"

The Srothar looked at the package in his hand for a moment, then down at the patient Griffy. He always knew his boss was rather sharp under all those flamboyant displays, but...he had once again underestimated him. The feline wondered...those words, 'a change for the better'. If the otter knew the horrible cause of his weight-gain, he would not be uttering those words...would he? But...regardless...what if Griffy was still...right? He...couldn't know. Not for sure, not yet...it went against everything he believed in, didn't it?

One thing was for sure. In comparison...some simple stockings hardly seemed like that big a deal, didn't they? The otter still awaited an answer...his other thoughts, troubling as they were, could wait.

"...Alright, you win. I'll do it. Sometime." Biscuit relented, a bit nervous to even suggest he'd do something...weird like that. But that nervous feeling soon melted as Griffy lunged forward with a happy chirp, the otter's arms snuggling into his lower gut and the otter's face nuzzing his into the center of his belly...a rather-strong hug indeed for such a small creature to give!

"Oh, you're the best sweetie! You'll love them, I just have that feeling~" the otter barked out against his flab, before pulling away from the hearty hug and grinning at the placid expression he'd left the Srothar with. "I gotta get home now, but I'll see you at work tomorrow, okay? Ta-ta~" The mustelid gave one more quick swirl of a rub to the feline's tummy, before slipping back into his car.

"W...we'll see if I do. Have a...good night, Griff." Biscuit said hesitantly, still feeling the fuzzy warmth the otter had left against his belly as he waved goodbye and slipped inside his apartment.

This was a delightful commission I got from :icongeckomania:! <3 He really knew how to draw Biscuit cute as heck here~ That belly shine is just too lovely, and that derpy contented face!

You might notice that the story snippet above doesn't actually address the subject matter of this picture - just the lead-up to it, of sorts; namely the story behind those stockings he's wearing. In truth, this was a picture I got to go along with Chapter 5 of Biscuit's story...which, I still have yet to write! So consider this a teaser of sorts; I won't say who he's eaten here, but I will note that this situation is a tad more..consensual, from both sides. This is not feral-Biscuit...and this is not the same situation as his first, much more fatally-fated meal. ;3

Honestly, part of the reason I'm posting this before I write Chapter 5 is to encourage myself to get in gear and write it! So we'll see if that works. I do feel interested in getting back into the story...but my writing muse is a very picky beast. With luck! (It'll probably be the most adorable chapter yet~)

I bet some of you might be able to infer what's going on here if you've read all the current chapters. But that's okay if it's given away! Because you'll still have no clue how the story will get to that point, and that's the fun part~