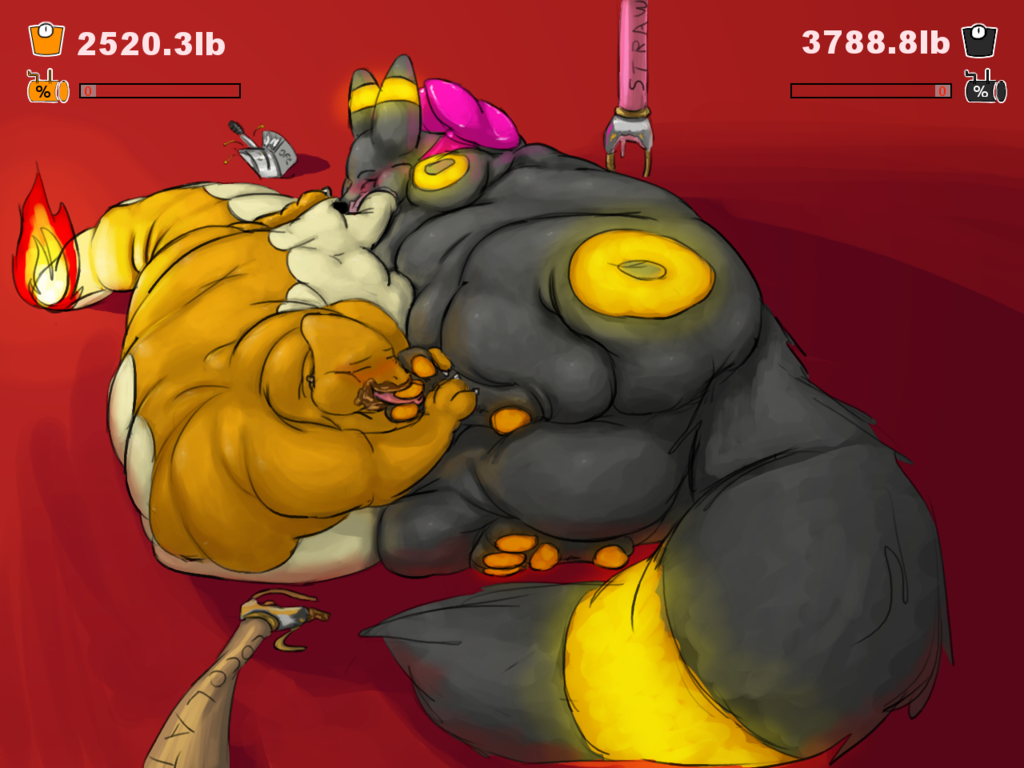 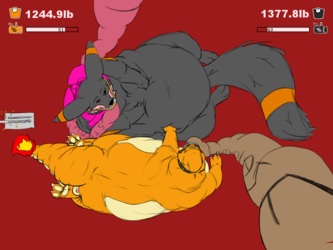 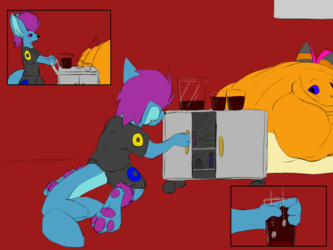 Shared bliss is always more wonderful than solo bliss. Shame and I didn't keep track of how long the vats' pudding supplies took to finally dwindle; we simply enjoyed their strong, yet soothingly-tasty flows together, watching in fascination at each other's forms as we swelled and fattened and grew more and more and more...! Though basically immobile, we still were able to shift and move at glacial speeds, enough to eventually snuggle up belly to belly against one another. Plush, over-fattened body against another, it was that much easier to enjoy how soft and plumpened we were growing, our thick rolls of blubber jiggling and mingling amongst one another.

But eventually, all things must come to an end... Automatically the machinery above did turn off as the giant vats emptied the last of their pudding supplies, the pumps staying on just long enough to send the remainder of the sugary treat down our maw-pipes. And with that...we were done with our dessert.

We took a moment to catch our breaths, lick our mouths of any remaining pudding, and get acclimated with the strange 'emptiness' now found in our maws. It was truthfully a bit saddening that our sweet meals had been exhausted, but we both knew it was coming, of course. Finally, I lifted my overweight arms up to my face, my chubby paws finding eventual success in pulling off my now-useless food-mask and tossing it to the side. I panted into the air for the first time in a while, pondering licking my chops of the mess of pudding on my face, but...I wanted to savor the sweet scent stickily stuck to my snout, for now.

Looking back, I noticed Shame turn his own mask towards me, obviously wishing his off as well. Pondering for a moment how I could reach (hint: I couldn't!), I instead rose a blubbery thigh up, carefully placing my foot against the side of his mask and using a single toe-claw to manipulate a strap...ah-ha, there! The Umbreon let out another, now clearer purr as he shook the mask off his face, the ceiling-mounted device swinging out of the way.

I returned the purr as Shame snuggled closer to me, both of us simply a pair of pacified, over-plump Poke's now. With my face unblocked, I nuzzled against all that 'bree-belly in front of me...but then eyed a bit lower. The Umbreon's glowing foot pads had caught my eye, and his lovely, extra-chubby feet easily -kept- my eye. Playfully, I decided to utilize my available mouth, as well as 'fill' it with something once again... Shame offered no resistance as I gently clutched one of his feet, the 'bree giggling as I scritched his sole and lifted it to my face. Paws were always wonderful; Umbreon paws even moreso, and FATTY Umbreon paws BEYOND moreso! And so it was with no surprise that my forked tongue lapped out earnestly to that cute foot, giving it a good deal of well-deserved attention. Slurps to that plump sole, nibbles to those colorful pads, and even tasty glomps of each and every one of those thickened toes...I was in bliss before, but Shame's pawsies - and Shame's wonderful self as a whole - made it that much sweeter!

The Umbreon seemed pleased, though a tad bemused by my actions. It certainly felt nice on his foot nonetheless, and he was happy to offer his other foot to my slurp-and-nom-happy behavior as well. To return the favor, Shame nuzzled down into my cream-colored belly-fat, and attempted some successful emulation of my actions. He blushed as he opened his big maw and glomped over a few thick rolls of my gut-pudge, purrling as he sampled the plush-and-smooth-scaled hide. My blubbery wriggles, including a heavy thump of my overgrown tail, made clear my approval of his methods, and so he continued them...still a bit reserved, but certainly in more earnest. His thicker Umbreon tongue was quite strong, and every slick lap it made rolled and shoved and squished my fat about. Though vorish he most certainly was not...Shame couldn't help but start to appreciate my natural 'flavor', quite possibly sweeter than normal consider the literal tons of pudding we had both consumed. With that, he began to feel more earnest, and glomped more playfully over my thick blubber.

Nom, lick, glomp, nuzzle, smoosh... That's what we did for quite a while. We're quite a silly couple of overfilled Pokemon, aren't we? But enjoying our pudge, enjoying each other's pudge, snuggling... It was all worth it, because we were friends, and could share good times like these with each other. <:3

Indeed, these adorable actions could have continued for quite some time...had another person not interrupted the events soon after. A mere observer of the Pokemon, up to this point, but one wishing to offer the blubbery pair something...refreshing. That's certainly all, really...right? Well...we'll just have to see...next time!