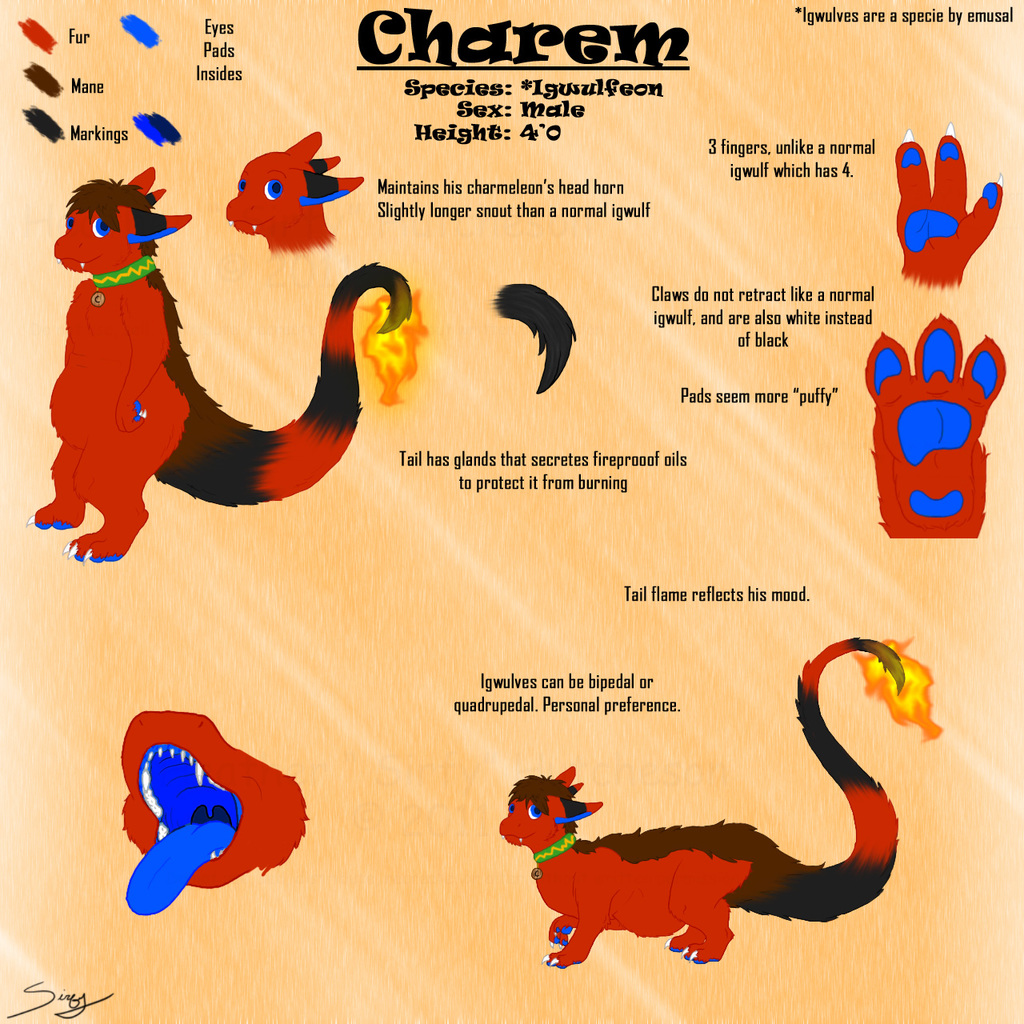 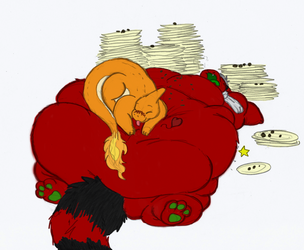 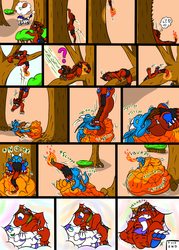 (This is the clean version of my igwulfeon ref sheet! Basically it just has some adult stuff omitted. You can see the adult - and thus full - ref sheet right here: http://www.furaffinity.net/view/8651143/ )

Awrowrawr, I've been a jerk for not posting this up sooner!

This is a reference sheet, made by the wonderful   sirfy, showcasing my special igwulfeon form. You guys might remember me drawing the form way back when, but that was an unrefined prototype. This, however... <3 <3 Well, let's just say that Sirfy did a spectacular job!

But, a little backstory. My igwulfeon form here is basically a hybrid of igwulf and Charmeleon - having predominantly-igwulf traits with a number of Charmeleon traits poking their way out. The head-horn, tailflame, number of forepaw digits, claw color and properties, snout design, and a few adult things are all influences of the 'Charmeleon' part of this form, while the rest is allll igwulf. <3

Plot-wise, my igwulfeon self has never been fully 'explained', but the general idea is that I previously was a Charmeleon and then I somehow got 'merged/transformed' into the mostly-igwulf, partly-Charmeleon creature you see here. As such, I'm still not used to my new body, and am a bit clumsy and less-adept at normal igwulf customs and the like. Actually, me and   frostbite-w have been working on a comic for a while now that will be quite nicely fleshing out this form of mine; I've been slow at getting to the latest page to do my part of the work, but I will definitely get back to it soon. (Promise ya, Frost! x3)

But what is an igwulf? For the uninitiated, they're a fuzzy, laid back, yet very capable species that was created by   emusal, aka my dear old friend Reed. Hands down, their my favorite original species that's ever been created by anyone in the fandom.

Physically they're not that complex, but at the same time that's part of the beauty of them. They can have many different stripe patterns and colorations, which allows for a lot of variety, but they all have similar builds and features. Long, powerful, prehensile tails, pouches (both males and females), a nice mane of fur on their backs (for males) or chests (for females), and so on.

But I think it's the emotional, mental, and social part of the species that appeals to me most. They are typically a relaxed, laid back species, but they are extremely capable when trouble (or hunting, etc) is going on. More athletic than their fuzzy appearance belies, they are capable climbers and fighters...and, notably, many are quite skilled in the art of vore, and are able to consume some fairly large meals!

Socially, they tend to live in low-technology tribes, but it's less a mark against their intelligence (they're actually very smart) and more an indication of how 'down to earth' and appreciative of living in nature they are. You know, without being hippies. =P

I could go on, but I would heavily suggest just browsing   emusal's page to glean more information. He's coupled some wonderful stories and descriptions with many of his lovely drawings, which certainly explain a lot about igwulves in general. n..n

Also, if you find the igwulf species to be very interesting, why not make one for yourself? Reed made this handy guide to explain how one can correctly make their own igwulf. =3 The more igwulfs around here, the merrier, I say!