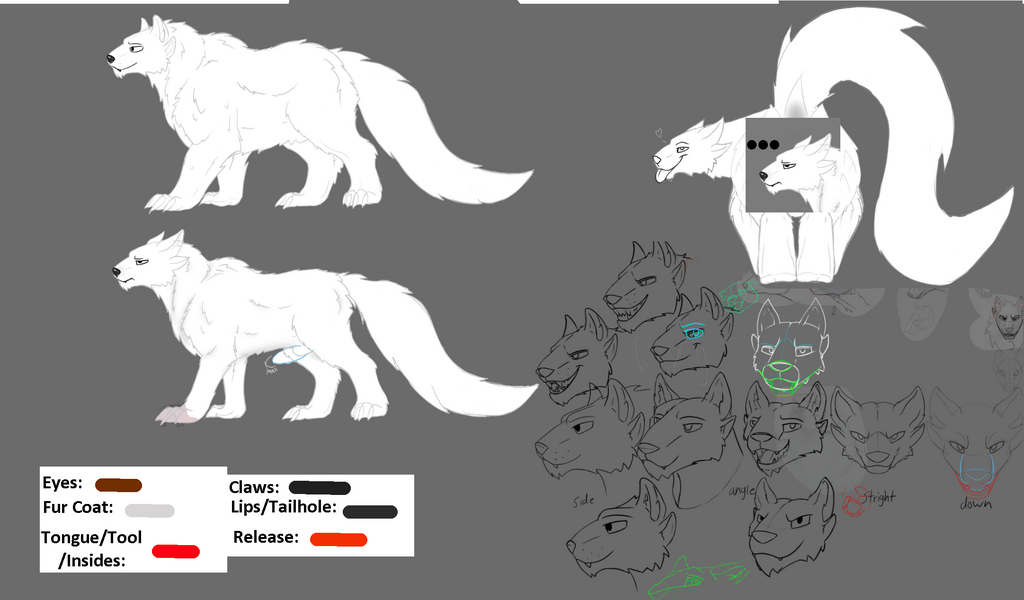 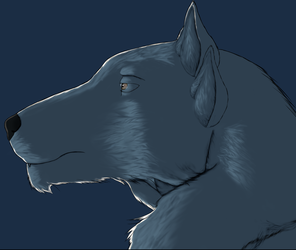 This... This has been a long time coming >>;
First of all, I didn't draw ANY of this. 110% of the credit goes to Mr.Cross (https://www.furaffinity.net/user/jarickocross). Second; this is a Work In Progress, but something he's done with what little time he's had. A few of you may have seen pieces of this around (like as my icons from time to time), but yeah. Here's the full thing.... Kiiiinda.

As stated earlier, it's a work in progress. Next to no coloring yet, missing the black collar mark, and the expressions there are just ideas/sketches overall. But it gives you a good idea of Bartan's overall structure lately, the way I honestly picture him/myself. Granted, this ref will only cover his feral form, since it's easy enough to picture as an anthro anyway.

There are a few issues I've run into though. Mostly revolving around statistics. Of those of you who've read my more recent works (Demember of 2019+), they'll recall this strange... Thing Bartan has with his tail: if you (or he) pull it and speak some sort of command word, his body will follow such a command. Against his will or not >>; Though this is limited mostly to physical changes, and very VERY rarely mentally.

Some examples of this are that you Can:
-Grow/Shrink him
-Make certain parts bigger/smaller
-Inflate or deflate him, be in general or certain parts
-Change his overall form into something different (though he usually keeps some features. Eye+Fur color, might still have a more polar bear-ish muzzle, etc.), like a theropod, dragon or a pooltoy.
-Change his Gender

You get the idea (I hope): Physical vs Mental change. But you can see why stats like "Height, weight, etc." are quite difficult to pin down. They often just change depending on where he is and who he's with. But as a default... Take this with a grain of salt:

Species: Unspecified. He often uses the term (Polar) Bear due to the shape of his snout- and while we're on the subject; please take note that it's a Polar Bear's snout, not a Grizzly's.
Height: Standing straight up, the very tips of his ears are just past 7 feet. So a bit smaller than a horse.
Weight: I'd say about 450lbs to 500lbs. He looks a lot larger due to the thickness of his coat, but a lot of it is just soft fluff.
Length: Another weird one that's difficult to measure. I'd say... 2 and a half meters? From nose to rear, that is. Tail alone should be an extra meter.

Other SFW tidbits:
-Not shown here due to it being unfinished, but he does have a black "collar" mark that looks like a set of handcuffs or shackles tied together resting on his neck/shoulders (or, collar, if you will). You can see this in most other pieces of him.
-His natural fur color is actually a weird mix of greys and browns, but due to making him look like the old grump he is, he dyes it white.
-Exceptionally long tail for a creature his size. It often drags on on the floor, but never seems to be dirty.
-He has four ears; the uppers are nearly twice the size of the lowers.
-Forepaws do have a posable thumb hidden in there somewhere, allowing him to use things at a pretty normal rate.
-His coat is so soft, he almost always doubles as a body pillow or mattress to anyone who needs/wants such.
-Fang tips are often seen though the crack of his lips.
-Can sometimes be seen/mentioned with "whiskers"; these are more like... Four furred pompoms along the side of his snout (two per side).