Balina broadens her horizons by Balina 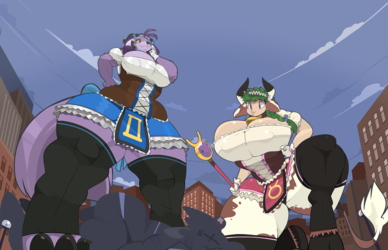 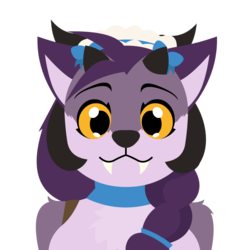 The single most important component of Balinology is consistent tracking. Subjects have a tendency to acquire more mooflike traits, often unexpectedly and to drastic effect. Take your eyes off of a Balina for a few months, and you'll hardly recognize them when yo-- we’re not doing this a third time.

The Witch Moof has always been extremely difficult to categorize. Constantly in motion, capricious to a fault, and prone to breaking even her own rules, she epitomizes why the head moof hates dealing with magic. On top of her own brand of nonsense, her use of elemental chaos to perform magic well outside of her abilities has been documented for some time. When handled properly, chaos is just another word for potential; bound in a selectively constricting enchantment, the escaping energies will usually find a way to accomplish the task laid in front of it, or at least something 'close enough' for her purposes. Imagine it as the magical equivalent to a shaped charge, only without any safeguards and only infrequently making anything resembling sense.

It seems that when handled improperly, chaos is also just another word for 'delicious candy'. Rather than handle it with the delicate care that the fabric of the reality between realities would normally require, the witch has decided to start applying all that raw potential to herself directly. Not only is this obscenely unwise, but it also has the infuriating tendency to do exactly what she wants it to do. Her powers in this state become vastly magnified, though trying to contain the surplus causes her body to express more possibilities than anatomy typically allows. The effects are temporary, but can be exceedingly drastic if she is feeling particularly bold that day, and will last as long as it takes to get the rest of that chaos out of her system. Until that point, there is no telling what she's capable of performing, and no real ways to prepare.