My name is Bad the Lion. I like to give advice.

Most of my advice is on Twitter here: http://www.twitter.com/badfurry

But There is also a comic that you can find below that chronicles my life story. The art is done by likeshine.

Its the best advice from a Bad Furry. Im a Professional driver on a closed course. Dont try this at home kid.

Its all in good fun.

A little about me:

I prefer to be called a "Llion". I am a Lion/Other Lion hybrid. The last of my kind. I have a troubled past as most Llions do. Did. Before they died. Last of my kind and all...

I have a secondary character called Rainbow Salty Eyebrow, who is a hairless grey wolf who likes pepper. He also has a featherless Uni-wing on his tail for stability.

That's all for now. Catch you later... I gotta go pay my mom rent. 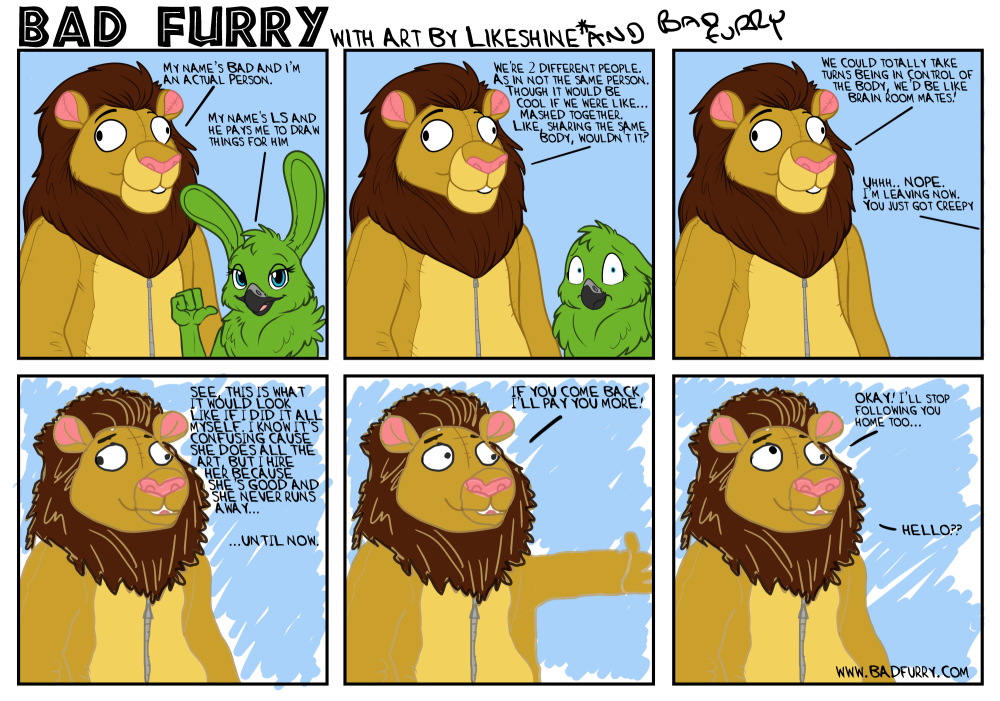 To pants or not to pants...

My animal-people brethren, I ask of you this question: why do some of us wear clothes but others don't? And why do still others wear half-clothes? I see animal-people jaunting around with zero clothes and then minutes later a gaggle wandering about in pants-suits. Others run through forests jumping fences and dodging trees in nothing but their shirts, apparently trying to get away from their knickers. And why? Aren't the pants the important bit? Who decided it was more appropriate to rob the rich pants-less instead of shirt-less? This all seems very backwards in comparison to normal society. We don't head to the beach in our best tank-tops, sans speedo. Does this make the tank-top the cartoon equivalent of a speedo? And what are all these animal people concerned about hiding up around their nipples? Do they even have nipples?

Maybe it all has to do with genetics? For many years I never thought animal-people even had private parts. Maybe they were all showing off their genetic superiority by doing away with trousers? "Sure I might have nipples, but check out my smooth crotchal-zone." But then along came the Furries with their anatomically-correct underpants areas and brought their shameful clothing with them.

Perhaps this all has to do with cultural differences instead? Maybe in parts of Europe anamorphs roam the streets completely nude with their smooth furry bodies, while visiting tourists from the West tout the more conservative T-shirt only. Then those weirdos from Japan show up fully clothed. Never trust a fully clothed animal person.

There may be major cultural clashes in the cartoon world between the clothed, unclothed and bi-clothing-curious. The unclothed may look upon the clothed with distrust and anger regarding their body-coverings. What are they hiding? How will seeing animals wearing clothing AFFECT THE CHILDREN? Oh God, little Tommy is wearing a HOODIE? You do know that shirt-wearing is the first step towards becoming clothing radicalized!

Why must the cartoon creators taunt us with these questions? I'm starting to think we should just leave the animal people alone to decide what amount of clothing they are most comfortable with. Unless you have a glowing rod, then put some pants on.