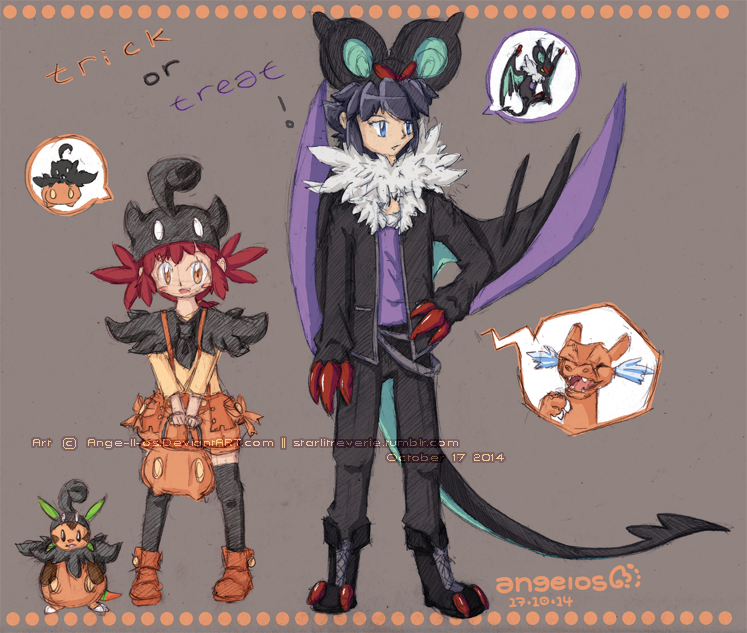 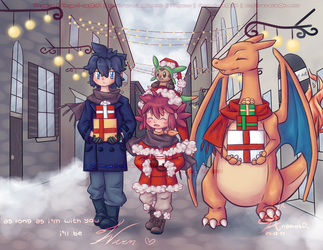 more cute dorks incoming because I am total PokéTrash

//lies down on floor
Frankly I'm not that into Halloween at all but here's a thing because it's cute and since I needed something to tide me over til Nov 6th when the Strongest Mega Evolution ACT II is gonna air.. or I guess add a week to that since I gotta wait for subs OTL
And before anyone else has to
//casually throws self in trash
It's ok I got everything handled; I am where I belong! XD actually I'm in Pokemon trash hell that's where I am LAUGHS
All I ever doodle/draw now is these two dorks I'm not sorry they kinda took over and ruined my life ok ┐(´∀｀)┌
There's never enough long periods of free time to ever do proper digital art so I just end up with a mountain of sketches of these dorks instead OTL

Manon & Hari-san as Pumpkaboo
Alan as Noivern
If you know.. that wasn't obvious though I think it should be pretty obvious XD I drew in little bubbles what they were~ [screams Noivern are a huge pain to draw in such a tiny space]
yes Charizard is inside his Pokéball laughing at Alan XD I decided it was too difficult to try and dress him up as a Noivern too..plus there was also kinda no room on my paper for him.. if he Mega Evolved they'd look close enough LAUGHS both black/dark grey dragons right

Saw @Mayapazoo's sketch of Manon a while ago in this fricking adorable costume and I just had to draw it too (〃´▽`〃)♡ Like I can't even?? It's so so so cute oh my goshhhh ;v; All credit for that design totally to them aaaa I only designed Alan's~
I've never been good at designing clothing which is why I don't have many of my own human(oid) charas but I think I'm getting better?? I'm really happy how Alan's look I based them off his regular clothes but to match a Noivern~ Gotta love big monster claws  ❤  LAUGHS apart from the obvious him and dragons totally fit I felt Noivern was the best [we're not gonna count Mega Charizard X since he's basically one on a regular basis] He even gets to keep having a ridiculous amount of fluff around his neck! I felt really really smart doing that ok shhh let me enjoy myself here

Manon seems to me like type sort to really like sweets and just the general idea of dressing up and having fun trick or treating~ Alan... not so much; he just kinda gets dragged along XD Maybe under all that grumpiness he does kinda enjoy watching Manon having fun though even if it's not his thing (///ω///)♪ Ok shutting up now

I accidentally did this thing instead of the 43849068290893434 other things I should've done during one of my reading week days... OOPS OH WELL I regret nothing LOL
Was still very short on time so as you can see I used my cleaned sketch as the lineart instead of actual digital lines (；∀； )
Since the edges were all very sharp [this is all coloured with the pencil/binary tool whatever you wanna call it] I went with cell shading somewhat like how it's done in the anime as with the eyes which I dunno I decided to draw in that way instead of my own normal eye style XD It looks a bit more "right" that way?? I dunno haha
I like how it looks though even if it's a lot more rough than my usual work I will have to clean this up and finish it properly nice and clean another time and update this deviation aaa until then though please accept this so I could post this in time for Halloween~

DO NOT REPOST, EDIT, COPY, USE, REDISTRIBUTE, "REFERENCE" or TRACE etc... My art is not for free use or part of the public domain! Use in any way, shape, or form without my written permission will result in me reporting it. All rights reserved. Thanks!