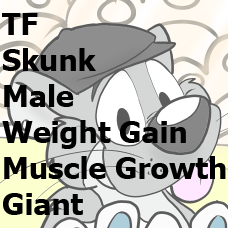 Kit yelped as he turned around to see the blackened mark on the back of his jeans. He scowled and crossed his arms. He knew a visit to Alkali’s lab was never complete without some sort of shenanigans. But those jeans were nice and who knew what that ray blast was even going to do! The human tried to brush the dirt away with mixed success.

“Al! That isn’t funny, I’m not your test subject,” Kit yelled. He wasn’t sure which of the hundreds of shining, metallic, mad-science looking devices the kangaroo was behind this time.

Two grey ears peeked up from behind a machine nearly the size of a refrigerator. “I don’t suppose you’d believe me if I said ‘sorry’ would you?”

Kit rolled his eyes as he continued brushing. “No, I wouldn’t. Not like the experiments are bad or anything. Being a toucan taur last time was pretty great. Just ask next time and-” he started, then paused as he realized there was something splitting the seams of his pants. It was small for now, and fluffy, and purple. There was no time to process what happened before a skunk tail easily the size of a sofa pushed through the seams and swished behind him. It threw off Kit’s balance so badly he flopped to the ground on his behind.

“Yeeesss?” the roo sang, walking out from behind his machine. He grinned at Kit, putting on his best ‘innocent’ face but failing horribly. Kit pointed to the tail as if to say ‘look what you did.’ His hand was already turning purple and lavender with the fur that sprouted across both arms. There was no stopping the changes there though. His toes felt uncomfortably tight inside his shoes, garnering a futile attempt to take them off in time with hands… no, paws that didn’t cooperate. The tops to the shoes popped away as his toes expanded straight through them.

“Come on Al, this is embarrassing,” the skunk said as he struggled to keep his glasses sitting on his muzzle. Without ears in their normal position that turned out to be difficult. To make matters even more difficult he realized that the grumbling in his stomach wasn’t from hunger. The purple shirt pushed up toward his chest, forced to stretch wider as his gut greedily took up more space. The heavy belly swayed and forced his legs apart. He pulled down on the shirt to try covering himself. Nope, that wasn’t going to fit anymore. Although that might not matter anymore; was a shirt really necessary when his whole body was covered with fur anyway? Kit blushed.

“I’m just making you bigger and softer, that’s all! I can’t believe you wouldn’t want to accept this wonderful change I’m giving you,” Al said with mock-indignity. He leaned against Kit’s shoulder and pushed a finger against the gut that was rapidly filling out his frame. “Doesn’t it feel good?”

By now the last bits of Kit’s humanity were disappearing. “No! Well, yes, but that’s not the point. What will people think when I go out there as a skunk? A chubby skunk? I’m going to get stares.”

“Kit, you might want to hold onto those concerns if you think you’re going to get stares just from gaining weight…” Alkali teased, pressing his whole hand into the soft skunk tum.

“What do you mean?” Kit asked as he stood up. That’s when he realized what the scientist meant; he wasn’t just transforming, and he wasn’t just getting fatter. Those alone would’ve been plenty. But Al wasn’t going easy on Kit this time. The skunk stood at least a foot taller than his friend. With another burst of height upward that changed to a full two feet taller, 8 feet in total. That was on top of the complete shredding of his shoes to reveal the thick skunk pads inside. Kit’s toes, now free from their prison, squirmed and flexed in the open air. He worried it might be uncomfortable with nothing protecting his feet but… no, it was soft. Comfortable even. The sensitive pads beneath his paws cushioned him and delivered a whole new set of sensations with each toe flex.

Al walked up to the tubby skunk and face planted right into his belly. “That’s what I meant. You’re gonna take up the whole sidewalk at this rate, tubs.” The kangaroo drummed his fingers into the soft, wobbling tum. Running his fingers slowly up the fur felt oddly pleasant. Like the feeling of an extra soft fleece blanket, but covering his whole body.

Kit wasn’t so sure about how Al was treating him. Getting bigger was great, but getting bullied into being a macro was a step too far. And he hadn’t even asked permission. Kit crossed his arms again, laying them atop a stomach that could act as a loveseat if someone were so inclined. As he crossed arms the sleeves on his arms ripped. Now that he was paying closer attention the skunk realized the roo had miscalculated somehow; he’d been given muscles too. The thick sinew beneath his fur had turned him from a tubby skunk into something more approaching a musclegut body type.

The roo sure seemed confident in himself down there, Kit mused. Al was leaning up against his belly, propped there by one hand as he monologued. It wouldn’t be mad science if there wasn’t a lengthy monologue involved. With the roo distracted, Kit knew this was his chance to try out the new body. Reaching over to a heavy lab bench the skunk lifted it up with two hands and found it weighed next to nothing. Huh. That was interesting. With a grin he pressed both arms together and found he could even manage to bend the metal of the table. He’d grown even taller in the interim, ten feet of skunk testing his power.

And still Alkali hadn’t noticed. Maybe the kangaroo needed a jump start to figure out who was in charge. A skunk tail snaked around to curl in front of the kangaroo. It shivered and swayed in front of Al’s face, hypnotically, distracting. It responded to Kit’s smallest thought much to his pleasure. And it was big enough to encircle the scientist easily. Another one for the ‘pros’ column. Not much in the ‘cons’ yet.

Kit started to walk forward. Al still hadn’t figured out that he was no longer in control which suited Kit perfectly. That meant he could get some bullying of his own in. The kangaroo was prodded forward by the wobbling skunk tum until he was only a few feet away from a wall. Al paused, concentration broken as he realized what was happening. But it was too little, too late. The roo put his feet out against the ground to try and get leverage for stopping, eyes wide as the wall inched closer and closer. He wasn’t able to stop the skunk though; Kit was working with far too much mass to be stopped easily. And his tail seemed to constrict just slightly, enough to keep the kangaroo pinned in place.

Al’s eyes went as wide as dinner plates. “Kit, wait! I can turn you back to normal! Just don’t smother-”

The wall cracked slightly from the weight that pressed into it. No more pleas for clemency were heard from the scientist; most of his torso was sandwiched by a wall of soft, lavender fur that squished up against him and filled all available space. He was pinned and there would be no escape if Kit didn’t want it. Now that he’d been given all this mass squishing it against a person felt like pressing a large stress ball. His tail snuck out again and flicked back and forth behind the sofa-sized skunk rump, apparently pleased with itself.

“Didn’t really think this through all the way did you, short stuff?” Kit rumbled. He smiled when all the roo was able to manage in response was a squeak and squirm. “Now, just ask next time nerd.”

Another rumble, but this time from his gut instead of his voice. Kit could tell he was hungry. Really hungry, in fact. Maybe there was a fridge around here that he could pillage. He was just about to make good on that idea when his body shivered. He burst a whole 2 feet taller. That settled it. He was going to eat the refrigerator whole. Al wasn’t going to stop him after all. He was still pinned against the wall, feet dangling just slightly off the ground thanks to the growth spurt. This was the roo’s fault, so Kit didn’t feel too bad about this. I mean, who grows someone into a giant, tubby, muscular skunk and doesn’t think about having food to serve afterward? Poor planning, that’s what it was. 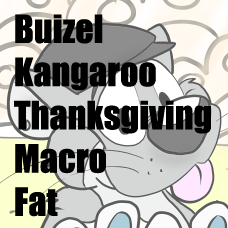 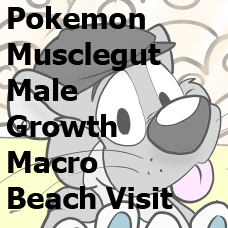 ALRIGHT, back to posting the stories and art!
Here's a really fun one commissioned from Kit Sovereign. 1 hour in stream, and plenty of TF/growth.