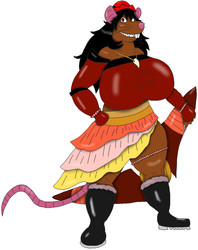 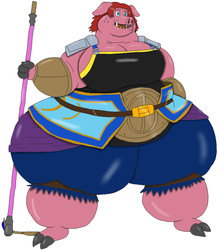 Real Name: Kalogo Themiscyra
Gender: Female
Height: 9' 5
Weight: 669lbs
Element: Earth
Weapon: Crossbow Gauntlet (West Wind - 西風)
She was from the state of Themiscyra who was the daughter of the family of Ares, the first amazon who found the city which by her blood grown in height than the other amazons. When her mother was in battle with Aprala as a hired force, she was abducted by Wu Lao ( 武勞 ) for her beauty to keep as his own. She tried her hardest to resist the army abuse, but she broke to become Wu Lao's sex toy under her new name, Ma Liang ( 馬良 ) getting her into acts on his throne room to satisfy his need until she was offered to Mao Fu ( 貓富 ), brother of Mao Weida ( 貓偉達 ) who is known to lust for women as service to Qiang Ye ( 強野 ). Her strength with Fu shown she was amazon blood being a blessing in disguise, so she employ her to his brother's army eventually being his son's bodyguard.

Hearing that Lao rebelling gave her a excuse to exact revenge over the troops who used her with some cavalry troops at her side. She faced a man under Jun called Unno Nishiki ( 錦 雲野 ) who joined her after seeing the horrors Lao caused, but she was overpowered by the troops til she was saved by Quan Chun ( 犬春 ) and with her trails, she became goddess of the Zodiac with her side job as protector of prostitutes and symbol of liberation