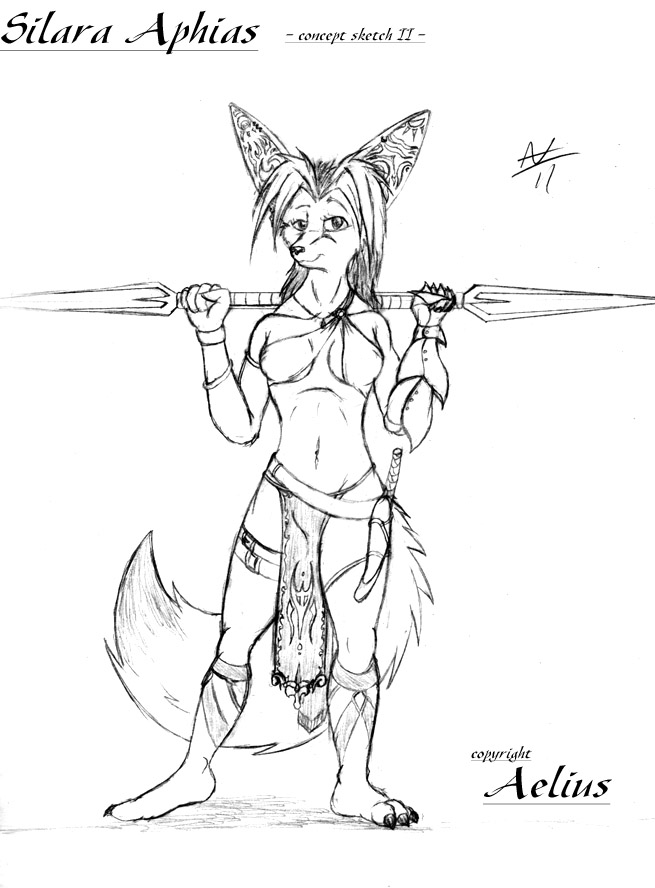 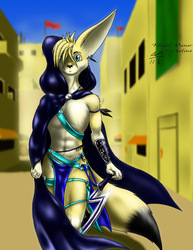 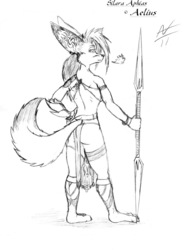 I know what you're thinking...

He created ANOTHER Sage? :p

Welp, this lovely lady came from the simple thought, "What if Khalil found a mate? She'd have to be a fennec fox, and since Khalil was based on my fursona, maybe she'll be from Ellie..." And lo, Silara came forth and immediately captured my attention with her playful, rebellious attitude and razor-sharp wit. Her double-bladed sword was pretty cool, too! Whether or not she ends up being with Khalil, she's been really fun to ponder. So here she is, the next in my ever-expanding repertoire of ancient Auran Sages.

Silara's parents were indentured servants to a wealthy family and as a result, lived far north from their own homeland in the desert. The family they served were good to them, but they hoped to one day earn their freedom with the money saved from their employers. However, their daughter Silara was discovered to have an awakening Aura right around the time when they were to be freed of their duties as servants. They were faced with the choice of either going free and making a living for themselves, or remaining servants even longer and using the money they'd saved in order to pay for Silara to make the lengthy trip to an Auran enclave where she could learn to control and use her newfound gifts to help society. They chose the latter, and before long, Silara was sent off to become an fully-trained Auran Sage.

She arrived at an Auran enclave situated near an Aquatic Temple dedicated to the Shepheri, Dolphin. Silara excelled in her studies and training, becoming well-known for having a rebellious streak along with a tongue as sharp as her weapon. However, her stubbornness remained under control and within years, she was old enough to choose whether to stay or to go out and put her talents to use in the rest of the world. In dedication to the Temple and as thanks for the support of its caretakers, she tattooed the insides of her ears with the wave-patterns it was known for, signify her devotion. That's right, the insides of her ears are tattooed. It's actually not unheard of for large-eared species, though it's usually only talked about, and rarely seen. Silara likes to stand out, though, and these designs came from her history of training among priestesses of a Water Temple. Interestingly enough, she's a pyromancer thanks to her Auran talent. She and Khalil have been getting rather close lately, so I can only wonder what the future might hold for the two fennecs. She even pondered staying at the temple, having befriended a young deer priestess named Phelia. However, both Silara and Phelia knew that the rest of the Temple would look down on their developing relationship, and Silara didn't want to bring a stigma on her friend, the Temple, or the Enclave. They decided that before they got any closer, they would wait until Silara returned from her journeys and see what may have changed since then, prepared for whatever life may throw at them. After a tearful farewell, the priestess bestowed on Silara one of her white, gold-trimmed cloaks, as a memento.

Now, Silara travels the land as one of many wandering Auran Sages, using her unique talents to help those in need and protect the innocent from supernatural threats. Her power is that of pyrokinesis, which matches her wild attitude quite nicely.

I'd like to ink her up and color her, though this particular image seems to be missing something. Maybe she isn't ornamented enough or something. Thoughts?