Damsel in Distress
The forest was lush and peaceful, birds tweeting among many other noises. If one listened even closer though, looking past the croaking of the frogs, one could even hear the muffled whining and groaning of a dragon as he was carried through this forest. Both bound and gagged for good reason as he wriggled in the grip of another dragon. She looked particularly unhappy too as she held the male over her own shoulder. Feeling him struggle constantly in her grip, being forced to listen to the muffled cries.

The purple dragoness didn’t complain though, she instead trudged on through the forest, eventually reaching a very quaint cabin seemingly in the center of it. This proved to be a sigh of relief for her as while the cabin did indeed stick out like a sore thumb in the forest, it was also so deep that any sane individual would avoid. Even though it was run down just a little, with a few boards falling off and one of the windows partially smashed in. It was still home to her.

It was a tiny building to say the least though, with only two rooms to it and the decor in absolute shambles. She didn’t seem to mind any of it though as she trudged inside. The door itself smacking the male dragon right in the head as she entered. Which in turn not only caused him to yelp and whimper even more as she carried him, however she ignored it for the most part. While she was irritated just a little bit, it didn’t stop her from at least being a little gentle with him, setting him on the bed.

“Oh please...will you shut up!” she shouted, which made the male panic even more as he struggled to sit upright on the bed. It was here she was finally able to get a good look at him, with black scales and a white underbelly. Interestingly enough, he was at least unhurt, aside from the robes, tape and blindfold. Which not only covered his hands, but bound his tail to his limbs and just simply covered the very end of his muzzle. On top of which, even his wings were bound with the cheap rope. Which was frayed from his constant struggles.

“Mmmh!” he cried, his head shifting in her direction.

“Now...this will hurt for a bit,” she commented, “However...after it subsides, I want you to tell me if you’re hurt at all. Got it?”

While he appeared to be a little bit appreciative of being rested on a somewhat soft surface, it wasn’t nearly soft enough for his tastes. While he wished to address this, the tape prevented him from doing as such and upon it’s removal he let out a very loud cry in pure agony. Leaving a bit of pink on the scales where it used to be. Just his luck! First a group of ruffians assaulted him, only to be stolen by another possible ruffian. This one seemingly without any care for the fact that she had just caused him pain. He gave a few heavy breaths after the tape was gone, taking just a few moments to move around his bound wings before finally speaking.

“How could you!” he whined,

“I did warn you that it’d hurt for a bit,” she pointed out, “But are you hurt anywhere else?” The question shifted his attention just a little bit as he continued to shift around in the ropes.

“I’m terribly chaffed. Otherwise, peachy,” He answered, much to the dragoness’ relief. “May I ask what you’re going to do with me? All I ask, if I may, that if I’m to be consumed that you use the finest spices. Thank you.” The dragoness seemed displeased at the sound of his voice. While his accent wasn’t much of a problem, the hint of a whine in it seemed to grate on her nerves a great deal.

“Well, at least you aren’t injured,” she sighed, “And I’m not a cannibal...I was just rescuing your sorry ass, because you were in danger.” As she spoke these words, she also very carefully moved around to undo his bindings, letting the rope carefully slide off his body to let it relax. Before slowly moving up his body and removing the blindfold. This entire time, she was very careful not to damage the rope or the blindfold as if intending to reuse them.

Once they had all been removed, the dragon was finally able to not only get a good look at the very unusual purple dragoness standing before him, but the two room shack she lived in as well. While what she was wearing was fairly average, the rest of her body was a bit different, as there were purple feathers in place across most of her body and wings. While there were light yellow scales on her chest. She was a very fine dragoness too, with a beautifully toned body and a feather-tipped tail.

While the dragoness only caught his attention for just a moment, what really caught his eye was the condition of the room he was in. It actually even seemed to upset him just a little bit as he stretched out with the precious gift of mobility again. In that very short amount of time, he took in everything after his eyes had the adequate time to adjust to the light. His silver eyes taking it all in.

An expression of distaste spread rapidly across his face as the horrid sight of the shack registered. He had bathrooms larger than this! The style was outlandish, not even ornate! He continued to glance around the room before once again coming to rest on the dragoness again.

“How was I to know you were a dragon too?” he asked, “Though given your sense of fashion, madam. I would not be surprised if you were. The wall color alone would convert me to it. Tsk. You ought to try light blue or a blueish-silver. Perhaps some silver molding...a vase over there.” He gestured off to a small table in the center of the room. “Silver roses. Don’t even get me started on this...mat. Sorry excuse for a bed is what this is.” His eyes once again drifted toward her. He was slightly taken aback by her ‘look’, but it was shown by a raising of his brows. “You are probably the most sensible looking thing in this room.” he mumbled before adding, “And that, darling, is not exactly a compliment.”

‘Just stay calm Resia,’ she thought, listening quietly to every single word he had to say to her. ‘Don’t let his words get to you...’ she took several seconds to consider her response from there, just watching everything he did. “And they said that it’s only the women that are the damsels...” she remarked, ‘What have I gotten myself into?’ 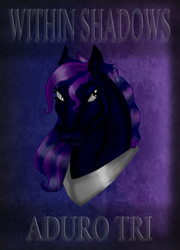 Just a story I forgot to post a couple weeks ago. Here, for everyone to enjoy.

One of my favorite pairs with a friend of mine.

Jed is owned by: http://skitty22.deviantart.com/ Go check her out.

Resia is owned by me.