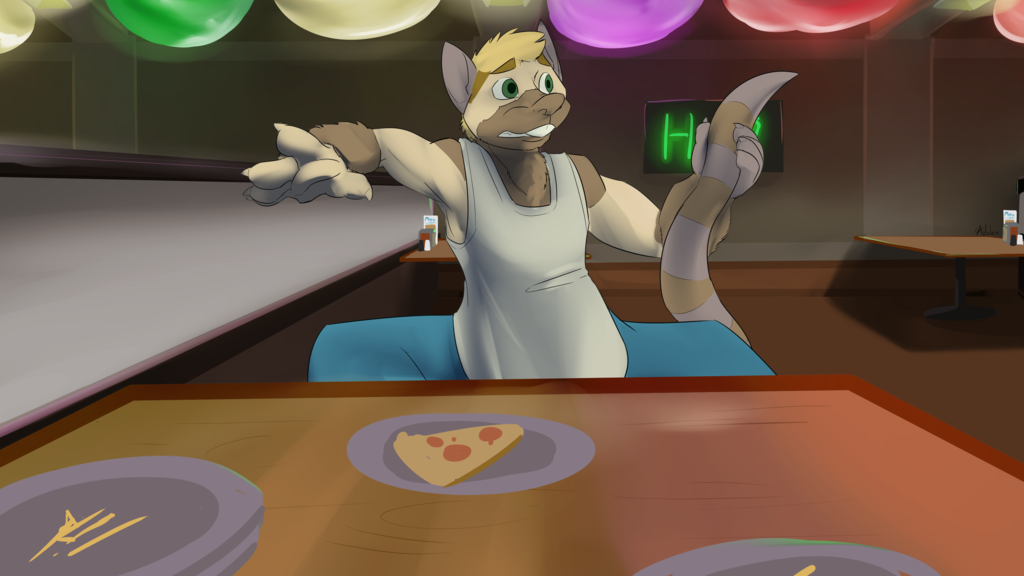 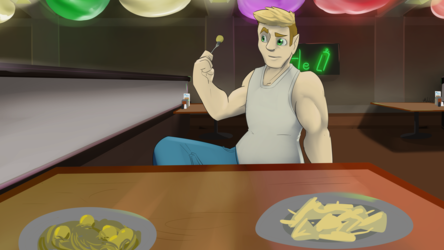 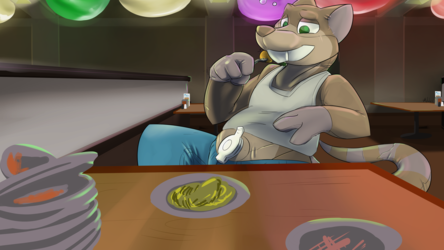 Commission for Daze-snow-leopard on FA of multi part doom and written fiction. This is vaguely within the canon of my Mana tear setting and Airbar subsetting.

The meals flowed from the kitchen to Daze’s table. Each meal had some element of cheese in it, which Jared explained that Squeaks, or rats, are associated with cheese even though the actual rat in the mundane world can’t handle cheese. It was something do with impressions becoming reality because magic is “functional nonsense”.

The foods were extremely varied and fought back the sense of dread that had clawed into Daze earlier. Nacho chips, pizza, Cheese and crackers, fried cheese sticks, garlic and cheese bread, and who knows what else as he focused on eating the food.

A second worker appeared at some point delivering the meals to Daze, he only noticed from the trance of eating because the person who delivered it didn’t return the same direction they came.
The appearance of the worker further distracted as Daze turned his head from the food to follow them. They were less than 3 feet tall, a good foot shorter than Jared and wore only a skirt on their feminine hips. Daze wondered briefly if the bar he was at was far more rascque than expected. Daze looked on and noticed that she was strangely angular in their shape with a sheen to their body that reflected the neon lights in the bar. Their body was some what mouse like but stepped through the bar on their blocky toetips. She closed the blind on the window and turned back towards Daze.

“Oi, watch the gaze,” she squeaked.

“Ah, sorry?” Daze said, half way through a bite.

The strange mouse walked up to Daze, it wasn’t his imagination that the mouse was topless but her body was clearly artificial with no clear definition. Her body was made of paned flexible plastic, the most shapes being in her face, large solid ears, practically cartoonish buckteeth and strange eyes that clearly darted around alive but relatively flat on the head. Detail simplifies out from there, hands being bulky, three fingered and mitten like. Her body had hips were more exaggerated giving her a strong feminine silhouette, but with the protrusion of an air nozzle where her navel would be, with a frilly skirt and her feet ending in practically hoof like nubs.

She stood there with a sigh realizing how confused Daze was less looking at her and more gawking. “The what is an inflatable Squeak,” she said emphasizing the proper noun, “the who though,” she paused to be absolutely sure that Daze was paying attention, “is Daisy.”

“Don’t worry, you’ll get past soon, big guy,” she retorted reaching up to thumb her teeth. She walked off to finish closing the store.

Daze reactively reached up to his mouth to feel the exaggerated teeth of rat, he’d been so busy eating that the effects of food was unnoticed. His head was distorted from the original human shape, ears pulled back and a snout beginning to form to make space for his new exaggerated teeth.