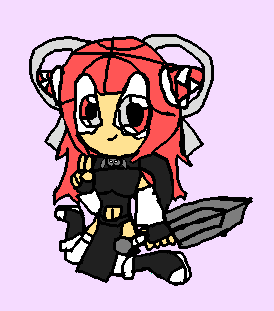 This is a character I've designed, at least a year ago. Anyways, ONTO THE DESCRIPTION!

Yura is a seedrian girl, of whom was created by humans, using the biological DNA, of seedrians. With a past of hers that remains a mystery, she did end up becomming a homeless child, since of an incident,. involving the attack, on a peaceful lab; leaving her a homeless orphan. But neverless, life wasn't too hard, on her; she had plenty of friends, that too, were homeless.

But recently,around the age of 10, she officially began to join a karate class. Thing is, her "sensei" turned out to be an abusive jerk, as well as a greedy cheapskate. To stand up for her friends, she did something her sensei dissaproved of; SHE WENT INTO THE BUILDING'S BASEMENT! There, she had found a powerful artifact, known as the "Ogre Collar".
When she put it on, it gave her knowledge of ninjitsu, meaning that, while she managed to become a 1st degree blackbelt after putting it on, she still had a LOT to learn, from it!
She then challenged her corrupt master to a fight; meaning that if she won, she becomes the new owner, of the dojo. And if he won, she would no longer be a student, and not have her money back, either! But she had won anyway, because her sensei WASN'T quite as tough, as she expected!

Sometime after defeating him, she officially gained a new home. But, while a little girl, she still needed a proper master, to help guide her, into mastering this form of a martial art. Thankfully, he met up with a friendly drifter, of whom is actually a MASTER of ninjitsu! And in return of becoming the new sensei at the dojo, he also LIVED there!

4 years later, Yura has PLENTY of experience, and as a teenage kunoichi. (female ninja) she still has a lot to learn! But, she also thinks of Espio, as a good friend, as well as a rival!

= Yura the Seedrian, alongside the artwork, are (c) by me
= Sonic the Hedgehog franchise, is (c) by Sega

Update, from 11/9/2016: I changed her color scheme a bit, to look less like Galaxina; a seedrian from "Sonic X". Anyways, I decided to do this, and well, I also plan on keeping the original color scheme, as a palette swap, within a fangame, with her in it. (As a supporting playable protagonist!)