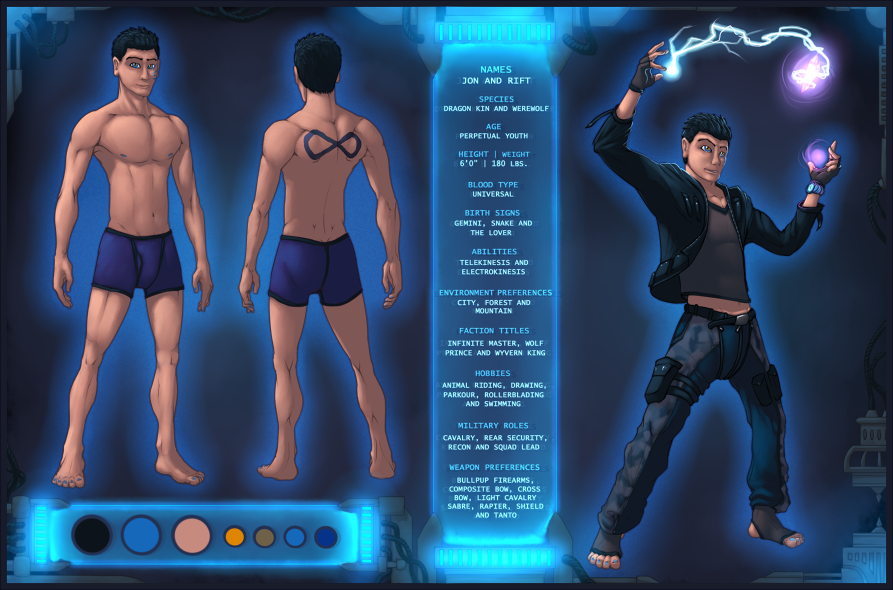 The Human Aspect of Infinite
Illustrated for me by: Khamul

-Instead of body hair, Rift's skin is covered in micro flesh colored scales. They are soft, smooth, and a little shiny when wet.

Until he was well into adulthood, Rift never new his mother was truly a dragon. The 'human' could not recall much of his life before the 14th year of it. The first home he can recall is the log cabin he built with his elf friend, Jet. He lived his early life seeking the companionship of wolves and other creatures in the wilderness. As he became more bold, he sought out what others called monsters with the hopes of befriending them, or to at least observe them ​from a safe distance.

Later in life he was adopted by the two royal dragons, Dreka and Flyer. The pair raised him for a time as their own. His dragon blood was awoken during this time, allowing him to become a dragon whom Dreka named, Sliv'oth. Some years later when their modest desert kingdom became besieged by a human warlord. Rift was smuggled out of their land to keep him safe when the war lord breached their city walls.

Out on his own, Rift gained the fabled tittle, 'Wolf Prince' thanks to the company of wolves he spent much of his time with.

Later in his adult life, the two dragons Twilight and Abyss took him in. He was still but a child to them. Twilight was as kind as Abyss was harsh and the pair trained him together to endure the Rite of Masters. Their efforts paid off.

Rift underwent the Rite of Masters and became Master of Infinity.

It was some time after this that his dormant winged wolf aspect, known as Wolfy Wet Furr, came to be.

For more information on his 'watch', see: Trinity

For a look at fetishes and other more mature related details concerning this character, have a look here.