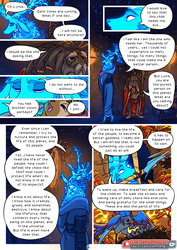 I'd like to show you guys something I just quickly put together. I used similar character displays as reference I've seen in the past. You know, like "try to recognize characters from this or that movie/series if they only show you the colors in this form, and indicate a bit of height. So for fun I made my own version of this about the Tree of Life. I have no idea how these things are called, so I call it a "color distincion chart" ^^ Somehow I found these interesting enough to try it out.

This was such a small thing, yet I had so much fun with it! ^^ The funny thing is, even if they're only blocks, you can indicate pants and tops, so you can make a block girly :3

I know the comic just started a few months ago (and two of the characters doesn't even have a refsheet), but I wonder if you can recognize all the characters ;)