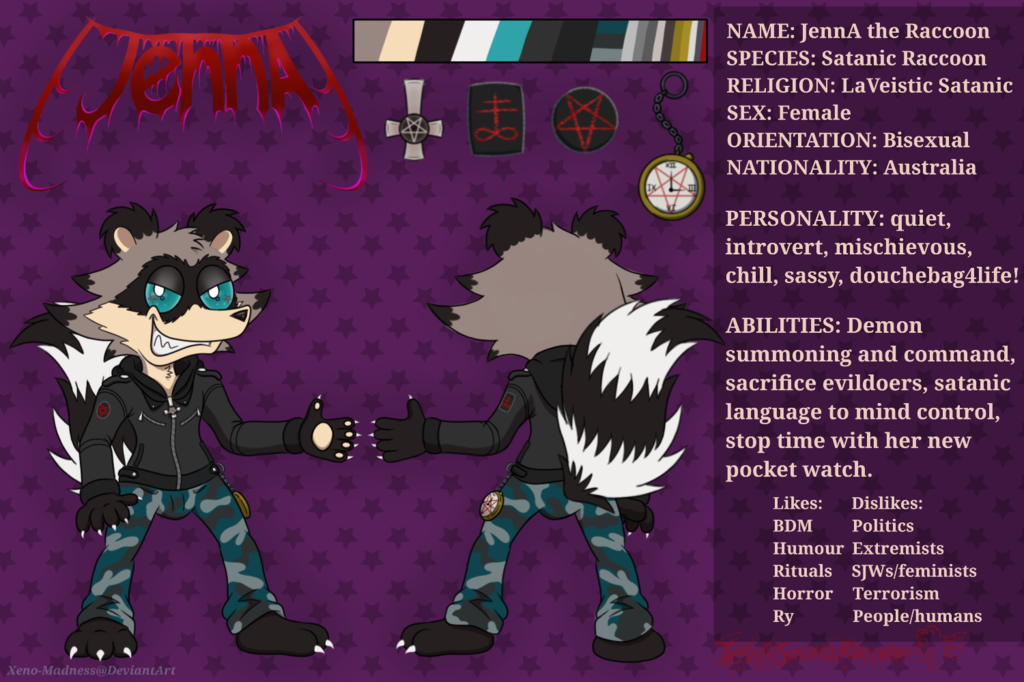 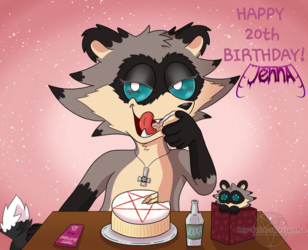 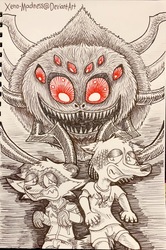 WEASYL INFO
Normally I don't post anything related to my fur on here but I'm only posting offical refs and special events related to her because I don't want this account having her as the main focus, plus it's just a bit of variety in my gallery.
I know I've already made a ref for JennA a few months ago but I wanted to change her design up a bit. So here's my fursona in a spicy new look~

. JennA's mask remains as a more triangular shape at the tips, same thing goes for her cheeks.
. Her fur is a slightly redish grey and black colour, the cheeks, paws and under belly are a orangish cream colour.
. The tail has three black rings and two white rings.
JennA still wears a leather jacket but her pants are now cargos with patterns on them.
. Her fave metal genres are Brutal Death, Black, Nu and occassionally Deathcore. She's a full on metalhead.
. Her other interests are gothic fashion and tells but also has a large interest in geeky pop culture.
. Being born in a satanic family, JennA considers herself a mixture of a Theistic and LaVeyan. Theistic for the belief of the devil himself (not her father, he is not Satan) and LaVeyan not just because JennA disbeliefs/rebels against God, it's for the fact she IS the devil (she's known as The Warden of Hell there) that controls Hell Factory. A modern Hell which is based in another dimension.
(Note: don't try looking for what "LaVeistic" means, it's just a made up word combination I made up. XD)
. JennA now has a pocket watch she has attached to her jacket, it can stop time for a while because it can only be fuelled by a true satanists blood in order for it to work. The clock shows the correct time too even after time has been restored.
. The reason she hates most humans is because they either want to kill her because she looks like an "abnormal alien", want her for food or their fur coat fashion. JennA prefers nature as her friend rather than humanity.
. Her body now looks more FEMININE than before because I kinda like it.

I know I've already done a backstory for her but here's a much less long description of it:
JennA was born in a litter of five from her satanic family and parents, Mother and Father. She had two sisters and two brothers, the kits were known as the Satanic Skull Raccoon family. The kits wore their skulls when hunting for creatures and humans who were considered evildoers to this world, they'd be killed to feed to father so he could feed his children from the eight tits he possessed.
JennA was the odd one out because she was the only kit who had autism and struggled with many things, Father disliked her for her low strandreds but Mother, older and young sister had always been supportive of her except for the brothers. Long story short, Father had become aggressive and abusive over time and attempted to harm his family, luckliy Mother was able to take JennA and her older sister away from the monster, her brothers were hostaged whereas younger sister went missing.
After becoming an adult (in human years) JennA moved from her mothers house and into one of her own, a small two bedroom unit near the city. She had a friend living with her, Ry the Skulf, although a tad taller than her and always smelt bad, JennA thinks of him as a brother to her because of how close they were as friends. JennA lives in a better place now with lots of nice people in her area.

I knew I forgot something, here's her previous ref from May https://www.weasyl.com/character/72298/jenna-the-raccoon