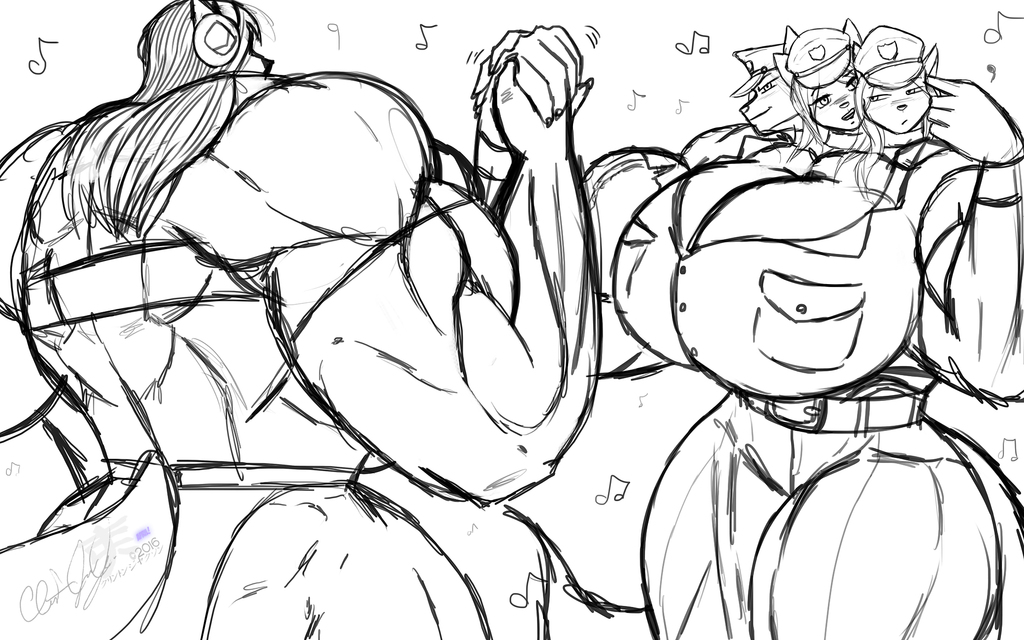 Normally, whenever someone makes a noise complaint, it is basically up to the police to come in and either tell the people to tone it down or shut the problem completely. For officers Naberus, Casus and Arcea Kiteon, that had a different outcome. Responding to a call to shut down a club gig for being too loud and as they came in and about o make the call, Naberus stops her sisters because her all-time favorite artist is on stage.

The heavy metalitronica artist with the huge and heavy bod, DJ Rippage!

She shows herself to be a tough woman, hell a huge woman compared to them but Casus and Arcea known when duty is duty but Naberus stops them, Arcea wants control so she can shut it down because honestly, she's not a fan of Nabby's taste in music. As much as she wants to do their duties, Naberus isn't being the one going along with the program. But among the bickering, Rippage did offer a solution: Sing one of her top hits and she'll tone it down for tonight. Naberus overjoyed couldn't help but accept since she knows all of her songs by heart.

Arcea does her best to keep a straight face as she tries to not get too embarrassed as Naberus screams her lungs out and Casus does backup. But she did get into the spirit of things and sang along as well. When that stint is over, Rippage kept her word and decides to play her good but less intense hits. But not before them leaving the two gave one meaty handshake, Rippage herself admiring the impressive bicep the sisters got with Naberius returning the complement with hers. With the noise down, the sisters le her and the club owner off with a warning and where on their way.

Days, later the sisters were jogging down the park and each of them where listening to their own type of music until Arcea's earbuds popped off and Naberus notices a familiar sound. Arcea listening in on one of Rippage's hits. Arcea knows Nabby will never live this one down.