I reject your reality & subsitute my own - Adam Savage - Mythbusters

Towering before you is a Ludicrously Large Lupine. The biggest, buff-est wolf you have ever laid your eyes on. As you gaze travels up and down his immense frame, you are at once hit with a sense awe at this monstrous being. His entire body seems packed with nothing but outrageously huge muscles, bulging so large that the deep cleavages between them look like ominous canyons of flesh. Even through his clothing, the sheer mass and volume of his tremendous musculature is visible as obscenely huge veins the size of a large train tunnel that goes through a mountain, snaking and bulging over his physique with each movement of his colossal limbs. His fur is black, while his head-fur is a lighter black. The soft fur of his stomach is a medium black which extends up to cover his huge chest. He wears a set of simple form fitting denim shorts, which seems on the verge of bursting apart as they're stretched to capacity trying to contain his gigantic bulk. His eyes are light blue. Massive doesn't even start to describe him, he is covered in so many muscles he looks like he'd topple over from his own mass, yet somehow he remains upright. He easily out-masses even the largest of body building macro-furs. A hole is cut in the back of his shorts for his long fluffy tail that wags happily to and fro. His gigantic muscular legs end in enormous three digit plantigrade foot-paws, tipped with large claws that are rounded off on the tips. He sometimes finds himself in all kinds of trouble just for being this big. He's really a nice guy, just a little bit too big for his own good. He is just a cub at heart. Don't be fooled by his massive size, he's just a big ol' softy. He is incredibly massive as you can probably tell from where you are. He's defiantly BIGGER then BIG. His gigantic muscular arms end in enormous four digit hand-paws, tipped with large claws that are rounded off at the tips. Don't hurt your neck looking up at him for too long, okay ? He also has on a blue collar that fits loosely on his massive thickly muscled neck. 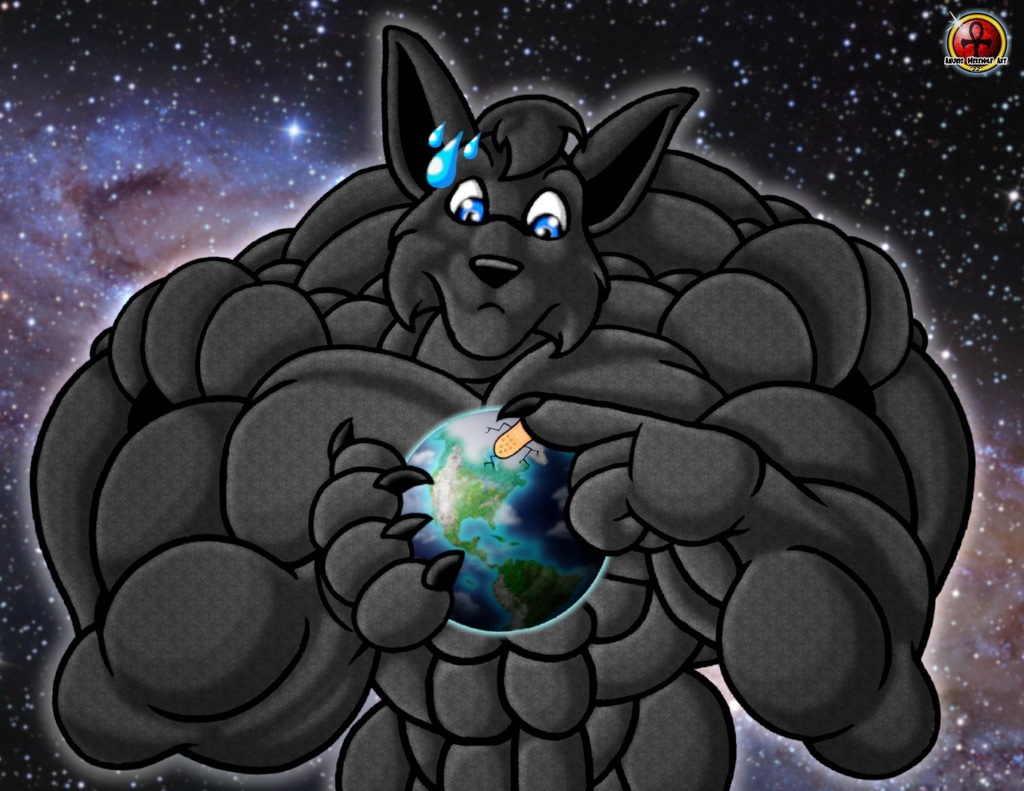 A 3rd of 4th or something like that
Stream - https://vaughn.live/funrirwoulfe
Start - 8:00am Mountain Time
Stop - 4:00pm Mountain Time
Other Info below
irc://irc.anthrochat.net [#pawpet]
Telegram - FunrirWoulfe
Discord - WoulfePack#4062
Extra long show if we are feeling okay doing it