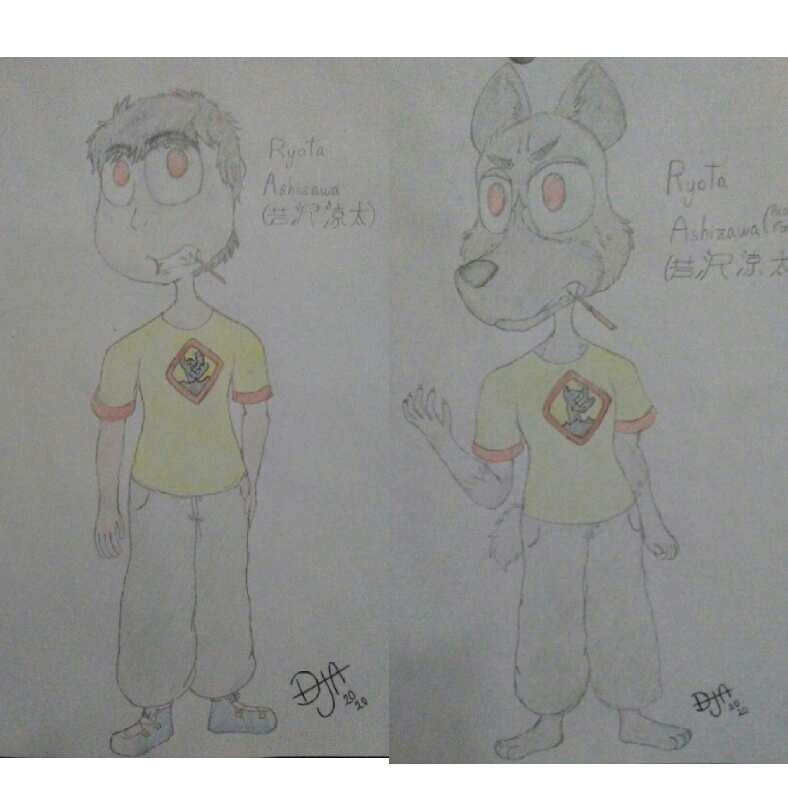 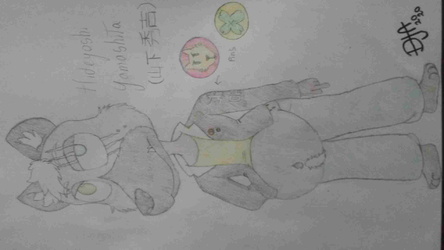 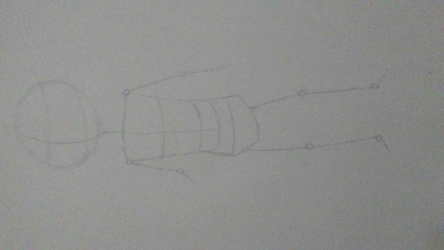 Appearance: Ryota is a short height young man with tan skin, black messy short hair, piercing yet tired red eyes, he always has a toothpick on his mouth, some teeth are sharp due to his animal heritage, he wears a "ironic" shirt of what it looks like a dog man about to sink in the water with red strips on the sleeves, he wears baggy green pants and as foot wear he wears shoes with knots of blue with white points and yellow squares on each side of them.

Ryota's Beastman form is of a hyena, with dark brown fur just a bit lighter tone on the arms and feet, he wears no shoes while in this form and his hands have sharp claws(most typical in mammal Beastmen species). He still wears his toothpick on the mouth, just flipped onto the other side, another thing that's constant here is his tired look. He also has a tiny brushy tail.

Bio: Ryota was known as a trouble kid very young, he got a hold of one of his dad's toothpicks and never left that habit ever since he was seven years old, in his teenage years he found his life full of troubles, the constant arguing with his parents about his future, his dream of being a famous musician being crushed and the violent behavior of his dad against him triggered Ryota's mind into believing breaking any boundary in order to live his own way was necessary to achieve what he wanted without being crushed, so he became a delinquent and a very well known in Anima-city, few years before being locked up he found someone that taught him about human music culture and found a way to break the town's security lock on the net, at first he and his contact were in good terms, leading him to obtain illegal human vinyl discs, his boom box and his headphones. However one year before Anima-city's anniversary he was caught by the police when he was beating up a fellow Beastman on the registry office. While investigating him they found the illegal human stuff and some acts of vandalism he did in public places, he got locked up for two years since then. His parents knew he was a lost cause so they never came to visit and notified him he was out of the house for good. He knew he was done for, but the worst was soon to come.

While in his cell he could hear the screams, and what sounded like a rabid pack of dogs outside, and part of his cell was slightly wrecked, he quickly his under his bed and saw it, a Beastman consumed by the Nirvasyl Syndrome, thankfully the thing didn't notice him right away and left. He would've succumbed too if hr didn't pass out from the stress overload while in his human form.

Weeks after the incident, he was called on his cell and some guards and police officers held him while personnel from the medical center injected him the serum against the Nirvasyl syndrome, although they had to sedate him first to avoid getting him slip away. He then woke up handcuffed in a interview room where Mayor Rose came in, telling him he was here to discuss his liberation, what she requested from him in exchange was a talk. In the end she asked him "What do you want to do once you're out?". He then smiled a wide grin holding his toothpick and answers with confidence." What am I gonna do? I'll be the most famous musician in the city!".

He was released as promised although none of his belongings other than his clothes and bag would be returned given the stuff he got confiscated is human material, and thus illegal to keep. It was a bittersweet victory for him in the end, well even more knowing he was kicked out of the house, and apparently had nowhere to go(which he also mentioned in the interview before the mayor left, he found a paper on the table with a direction). He then decided to give the shelter a shot so he's been there since then.

Ryota's a very volatile young man, although he's a delinquent he has a nice heart and no matter how fast his anger builds up, he'll always go with the pacifist approach first(but don't expect it to last)before recurring to violence, he also has little care reaching into the indifference to authority of any level, due to his grudge against his own parents, being also pretty inquisitive and honest when he's dealing with someone, he doesn't take warnings seriously which leads him often to troubles, but frames the other person for pissing him off. He loves music with passion and wants to become a very notorious one, it is his dream which died for a time in his teens but in his early adult years came back after he got a glance of the "Silver Wolf" concert. His treatment towards people as young or younger then him is pretty poor handled given his lack of friends when he was a kid. Male figures in his life tend to be drawn away by him due to the lack of proper affection and wounds his father gave to him. He's certainly a loose cannon but once you get to know him better he may end as a good friend and exceptional laugh stock!(hehe get it? Cause he's a hyena XD). He understands humans being awful but has the belief Beastmen aren't that better, he firmly states that "both folks have goods and have worsts so why bother hating them as they hate us?".