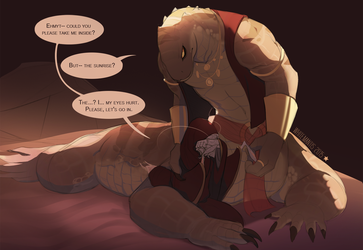 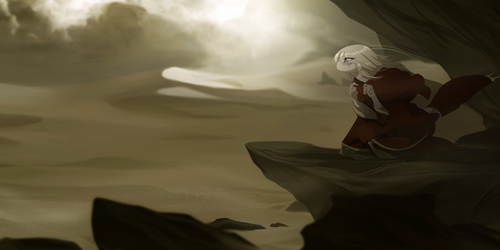 The Oasis Lord [Aruc Ivec]'s hoard is not restricted to simply gold and treasure; he also fancies possessions of a warmer, softer nature: flesh. Feminine flesh, precisely. Owning a sizable harem of girls, he not only deprives them of their freedom, but also their identities; taking their names away and replacing them with titles derived from how they were acquired, an unendingly reminder that they are nothing more than objects. Bought. Owned.

Among the owned is Eight Hundred, a young butterfly with clipped wings, named after the price she was paid for. Eight Hundred is gentle, meek and very fearful; her mind broken to the point she doesn't even seem to remember her original name. Eight Hundred does not think twice before surrendering to the cruel lord's perverted desires, no trace of disobedience rousing in her.

Eight Hundred's misfortune worsened after she was shackled with Aruc's then-newest acquisition: Saa Azeikan, who was re-named "Unsought", for she was the only one to ever enter his compound of her own will. The depths of Eight Hundred's submission are matched only by the heights of Unsought's defiance; she simply will not obey her lord before angering him: whether with discrete insults or outright disobedience, to undermine him in front of the guards and other slaves. She knows she will be punished for it, and even if they're tiny victories, they help cleanse her soul.

Unfortunately, being nearly constantly shackled to the mantis means Eight Hundred also earns a share of her "cellmate's" punishment. She doesn't understand why Unsought can't just fall in line and do as she's told - since she will end up doing it anyway - and save her from being unfairly punished. Unsought, on the other hand, doesn't understand how Eight Hundred is able to just obey Aruc without any sign of protest. No, she won't be like the butterfly. She looks at Eight Hundred to remind herself of what she dare not allow herself become.