Fridays at the Arcade by wanikami 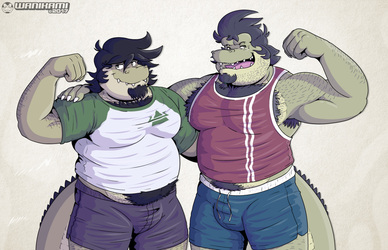 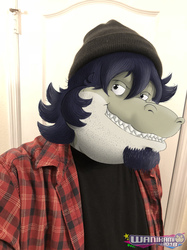 Fridays at the Arcade

Butch sighs impatiently while nibbling on a toothpick, sitting in the second player seat of the Virtual On machine at the local mall's arcade. It was a Friday afternoon in 1998, and Butch and his older cousin Sobek decided to hang out together at the mall after school. Butch and Sobek went to different high schools, but thankfully, both were able to take the city bus to the mall. Of course, being teens in the late 90s, they just had to go to the arcade to enjoy some games. After a couple of races on Daytona USA and matches on Killer Instinct, the two played Virtual On for a while. Butch wasn't as good at the mech-fighter game as Sobek was and lost after the 3rd stage, but Sobek was determined. He wasn't gonna rest until he defeated the final boss.

Thirty minutes and an allowance of quarters later, Butch couldn't take this waiting any longer. The black-haired krokodyle looked up at the ceiling in silence and thought to himself for a moment, then decided that he would have to use his trump card. He leaned towards Sobek and whispered into his ear. Sobek was totally caught off-guard by what Butch said and immediately turned towards his cousin, beet red and flustered.

"Oh my god, Butchie!" Sobek gasped, keeping his voice down and looking around cautiously. "Someone could hear ya!"

Butch's response was to point at Sobek's monitor nonchalantly. "Huh. Looks like you just blew up."

"W-what?!" Sobek quickly turned back to the game, and his face change instantly to one of sheer horror. That split second he lost focus led to Z-Gradt hitting his Virtuaroid with its beams. causing him to lose the match and get a game over. All that time and effort, down the drain.

Now that Sobek was done playing, Butch got up from the chair and slung his backpack over his shoulder. "OK, then. Pizza it is. I'm buyin'."

Sobek could only stare at the monitor in shock, the title screen popping back on. "But..but, I was so close..." he stammered to himself, sulking in his seat. Butch moved over to the other side of the machine and plopped Sobek's backpack onto his cousin's lap.

"Whatcha whinin' about?" Butch complained as he slowly walked towards the exit of the arcade. "You've beaten this game lots of time. It's not a big deal."

Sobek pulled himself up and followed Butch out of the arcade with backpack in tow, pouting at the younger krokodyle. "I know, but I hate coming here and not beating that game. It's too much fun." Sobek felt his stomach rumble as the two walked towards the food court. He had been so focused on Virtual On that he had totally forgotten he hadn't eaten since lunch. Perhaps it was for the best that Butch interrupted his gameplay short.

"Oh! And, by the way," Sobek continued, looking at Butch with a slight scowl, "It was cruel of you whispering that kinda stuff while I'm busy like that. I'm so gonna get you back for that!"

Butch glanced back with smirk; Sobek was so easily flustered. "No doubt! Hehe! You're such a fuckin' dork, Sobie." He gently elbowed Sobek's side with a chuckle. "Love ya, bro."

"Harumph!" Sobek crossed his arms and pouted again. Even after pulling something like that, he never could stay mad at Butch for long. If anything good came from this, it was that Sobek wasn't going to pay for the pizza this time.

Butchie would sometimes have to put up with Sobek geeking out on video games, just like how Sobek puts up with Butchie spouting sports stats. Even though they didn't share the same interest in everything, Sobek and Butch still genuinely enjoy being around each other. They had always been close, thinking of each other more like brothers than cousins, ever since they were hatchlings. It's a bond that will survive for decades to come.

Drawing this put me in such a nostalgic headtrip. This was an era when arcades were still popular places to hang out and play exciting new games. I played nothing but arcade soundtrack music while working on this and can still hear it as I look at it. The prospect of drawing in all the details of the background kept me from finishing this pic for months. Better late than never, I guess! The mall is based on an old shopping center I used to go to a lot when I was younger, and had a lot of fond memories of with my parents. Sadly, it was torn down in 2005, but thankfully, many photos had been taken and posted online. This canvas was HUGE (6880x2880, 300dpi), probably the biggest canvas I worked on. I made it as a custom desktop background for my new 21:9 1440p monitor I got a year ago.